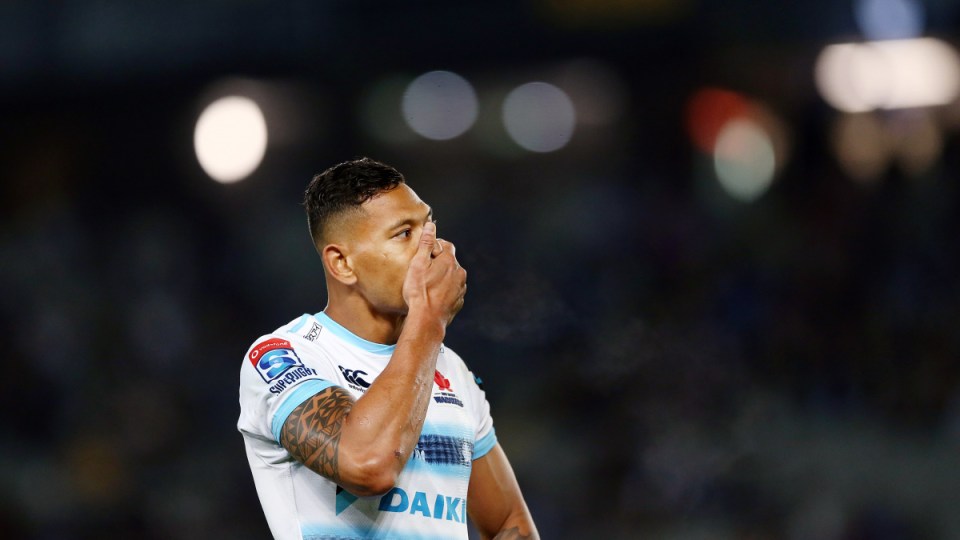 Israel Folau has announced he plans to play rugby league for Tonga after his sacking from union. Photo: Getty

Israel Folau’s sensational comeback is under a cloud after rugby league’s governing body denied it had approved the controversial star’s registration.

The Tongan National Rugby League dropped a bombshell on Monday, announcing Folau would be switching codes again with a dramatic return to rugby league to play for the Mate Ma’a.

In a Facebook statement Folau declared the Rugby League International Federation (RLIF) had cleared him to play Great Britain in Hamilton on October 26 and the Kangaroos in Auckland on November 2.

“I’m so grateful to have the opportunity to represent God, my family, my heritage and the people of Tonga,” Folau said.

“I am thankful that the RLIF have accepted my availability to play.”

However the RLIF has moved quickly to shoot down those claims, saying Folau’s registration has not been approved, nor had the federation been approached on the issue.

“The Rugby League International Federation is aware of a media release issued by Tonga National Rugby League stating that Israel Folau has been ‘approved’ by the RLIF to represent Tonga in international matches,” it said in a statement.

“That statement is incorrect. The RLIF has not been formally asked to consider this matter.

“The RLIF will not be commenting further on this situation at this stage.”

RLIF deputy chairman and ARLC chairman Peter Beattie has also cast doubt over Folau’s return, confirming that the move hadn’t been mentioned by the international body.

“The RLIF has made no decision in relation to any registration request for Israel Folau,” he said on Monday night.

“As a current member and deputy chair of the RLIF board, (as the ARLC representative), I can assure you that this has never been discussed or mentioned around the board table.”

The RLIF has made no decision in relation to any registration request for Israel Folau.

As a current member and Deputy Chair of the RLIF board, (as the ARLC representative), this has never been discussed or mentioned around the board table. #nrl

However, The Australian reports that Tongan league officials have already sought legal advice confirming Folau is eligible to play.

TNRL secretary William Edwards told The Australian Folau had also spoken to his legal team and was armed with his own advice confirming the same.

Still, the odds may be stacked against Folau’s return as Mr Beattie has previously shut the door on an NRL comeback, saying Folau would not be welcomed back due to his controversial social media posts which landed him in hot water with Rugby Australia.

“We are an inclusive game with respect for all. Israel has social media posts online that go against what our game stands for.

“As it stands, he will not be considered for registration. What Israel chooses to do in relation to his social media posts and his faith is a matter for him.”

RLIF’s comments ensure Folau can’t play for Tonga in next month’s World Cup Nines which is run by the NRL.

And Mr Beattie, along with NRL CEO Todd Greenberg – who is also on the international body’s board – are set to stand in the way of Folau playing for Tonga in this year’s Tests if the RLIF put his return to a vote.

Folau’s lucrative contract with Rugby Australia was controversially terminated four months ago after Folau breached its code of conduct with social media posts claiming homosexuals were going to hell.

He is currently embroiled in a court battle with Rugby Australia, seeking $10 million in damages, including a $5.7 million payout for the remainder of his contract.

Folau made his rugby league debut for the Melbourne Storm in 2007, before joining the Brisbane Broncos.

He represented Queensland in five State of Origin games and Australia in eight Tests before switching to AFL in 2012.

He later jumped the fence again, playing for the Waratahs and Wallabies rugby union before his sacking.