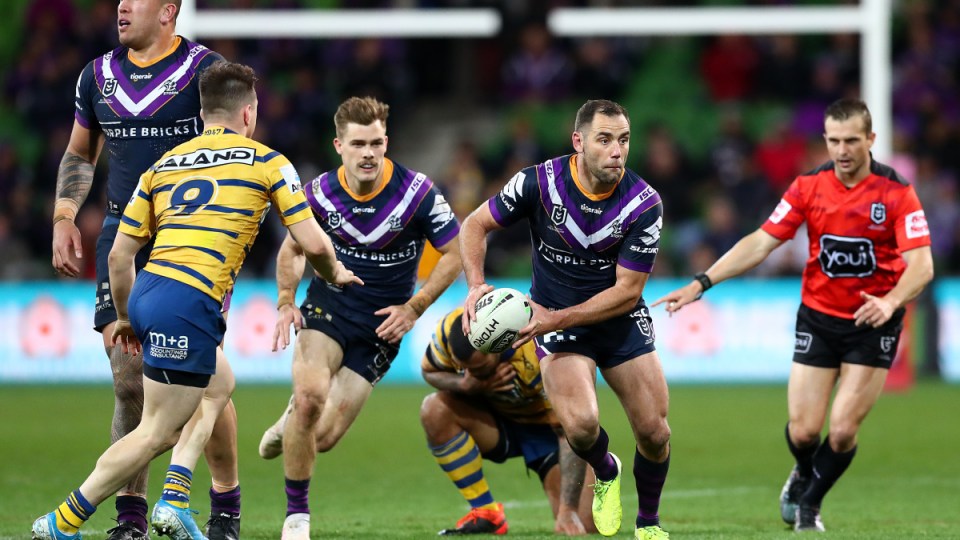 You just knew Melbourne Storm would bounce back after its upset against Canberra Raiders in week one of the finals, and so it proved on Saturday when Craig Bellamy’s boys smashed Parramatta 32-0.

On Sunday came the news that Melbourne skipper Cameron Smith will not miss the preliminary final against Sydney Roosters, despite being charged for his slap on Parramatta’s Reed Mahoney.

Smith was given a grade-one contrary conduct charge for his skirmish with the Eels hooker Mahoney in the first half.

The charge carries a fine but no suspension, meaning Smith is free to take on the Roosters in the grand final qualifier.

Storm has made the past three grand finals and was champion in 2012 and 2017.

Its drive and hunger to win is legendary and Parramatta just couldn’t handle the intensity.

Bellamy made a big call, dropping Will Chambers for Curtis Scott. But as usual for the coach, it paid off.

The final that had everything

The two old rivals put on a great show. Although the Bunnies got the chocolates, the Sea Eagles can walk tall.

No one expected them to do anything this season and to get this far in the finals is a credit to Des Hasler and his squad.

Hasler did catch the eye after the match with a hilarious heated phone call to NRL head of football Graham Annesley.

Not so hilarious if you were Annesley. But that aside, Friday’s match was pure theatre that did not disappoint.

Two decisions were heavily debated in Souths’ win over Manly.

First the sin-binning of Cody Walker and later when Jake Trbojevic was sent for 10 minutes for knocking down Dane Gagai as he chased down in defence.

Referee Graham Sutton decided it was a professional foul and marched Trbojevic. It proved hugely costly for the Sea Eagles as the Rabbitohs scored twice while the forward was on the bench and won the game.

Opinion was divided on whether it was the right decision.

Fans blew up and so did the commentators, with Paul Vautin against it but Brad Fittler supporting the referee.

It was a tough call, but that’s the way it goes sometimes. What is clear is that the NRL really loves a refereeing controversy. It’s in the competition’s DNA.

Shane Flanagan gets the green light

Banned Cronulla coach Shane Flanagan will be back in the NRL next year, but not as a head coach.

Head office has confirmed Flanagan will be eligible for registration as an NRL assistant for 2020 and 2021.

He has been banned indefinitely after it was revealed he had communicated with Sharks officials during his 2014 ban over doping infractions.

The ex-Sharks boss wrote a 10-page apology letter to NRL chief executive Todd Greenberg expressing his regret and it seems to have done the trick.

“I have spoken to Shane at length and he has expressed significant remorse and accepted responsibility for his past actions and the detrimental impact they have had on the game,’’ Greenberg said.

“We have created a pathway for Shane to return to the coaching ranks. Today’s decision gives Shane an opportunity to be registered in the NRL.

“This is not a set-and-forget approach. Shane and any future club who employs him has numerous conditions which they must comply with and the integrity unit will continue to monitor his conduct over the next two seasons.”

Best of British go round

The Pommies are coming. This weekend will see Canberra host Souths and a whole lot of Brits bashing each other.

Yes, history will be made when seven English players clash at GIO Stadium.

The Burgess trio of Sam, Tom and George will go up against their Test teammates and fellow countrymen John Bateman, Elliott Whitehead, Josh Hodgson and Ryan Sutton.

The Raiders are clearly favourites, being at home and having a week off.

They have been transformed by their Yorkshire core and their sole Lancastrian Sutton.

But expect Souths to give it their all in the nation’s capital.

Contracts and pens at the ready

With only four clubs left in the finals, for the other two attention has turned to planning for 2020. And already deals are being done and contracts signed as they get their rosters ready.

Newcastle has offloaded Shaun Kenny-Dowall to Hull KR in Super League, while the Bulldogs have signed Penrith hooker Sione Katoa.

Ryan Matterson is trying to get out of the Wests Tigers, while Brisbane want to get rid of Jack Bird.

The Tigers have re-signed veteran Benji Marshall for another year but want to medically retire Ben Matulino.

Meanwhile, Kurt Capewell is on his way out of Cronulla, the Dragons are close to re-signing Tristan Sailor but Jai Field will leave the Red V.

The free agency period is well upon us.