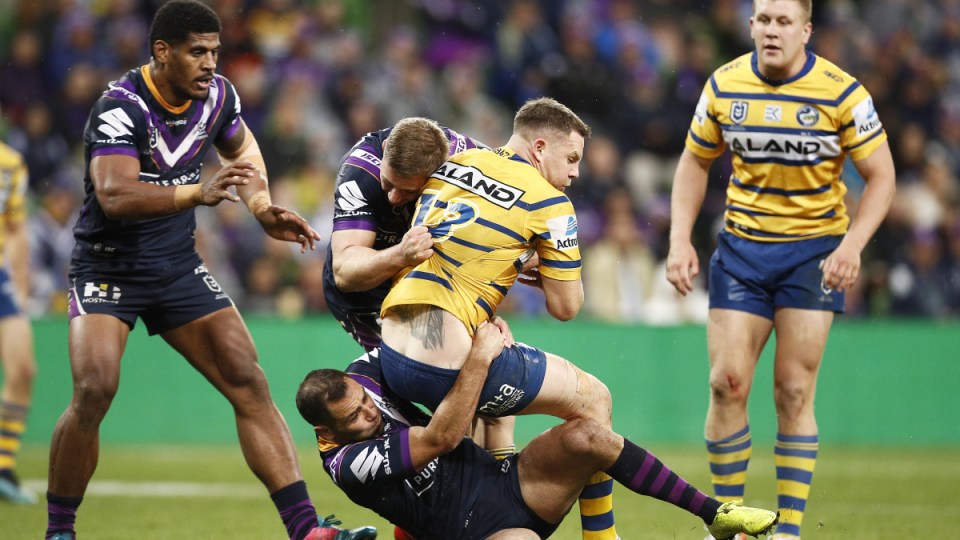 Parramatta didn’t make a dent on the scoreboard but did manage to get under the skin of Melbourne skipper Cameron Smith, who was sent to the sin bin during their 32-0 NRL semi-final win at AAMI Park.

For just the second time in his record-breaking 412-game career, Smith was given a 10 minute time-out for lashing out at Reed Mahoney with 11 minutes remaining in Saturday night’s first half.

Smith reacted to the Eels’ hooker grabbing hold of his jumper in back play, frustratingly slapping his hands away while assistant referee Grant Atkins watched on from nearby.

One of his hands looked to have come in contact with Mahoney’s forehead.

Referee Ben Cummins marched the Storm veteran, whose only other sin bin came in round four last year for back-chatting referee Matt Cecchin in their clash with Cronulla.

Rugby league commentator Phil Gould was outraged by the decision.

Smith is likely to be charged with contrary conduct, which might be a $1500 fine if the match review committee give him the same penalty as South Sydney’s Cody Walker. The Rabbitohs’ playmaker was sin binned for a similar offence in Friday night’s finals win over Manly.

If he is charged with striking, Smith might miss game time, with a grade-one charge carrying a 200-point base penalty.

In 2008, Smith missed Melbourne’s 40-0 grand-final loss to Manly through suspension.

Smith was rubbed out for two weeks for a grapple tackle during the Storm’s semi-final win over Brisbane, causing him to miss the rest of the finals series.

Meanwhile, South Sydney five-eighth Cody Walker is free to play in next weekend’s NRL preliminary final after avoiding a ban for his slap on Manly’s Jack Gosiewski.

The Rabbitoh was sent to the sin-bin in the 29th minute of Friday’s semi-final win over the Sea Eagles after striking Gosiewski with an open palm after the back-rower pushed Adam Doueihi’s face into the turf.

Walker has been slapped with a grade one contrary conduct charge which carries a fine but no suspension, meaning he’s free to face Canberra in the grand final qualifier.