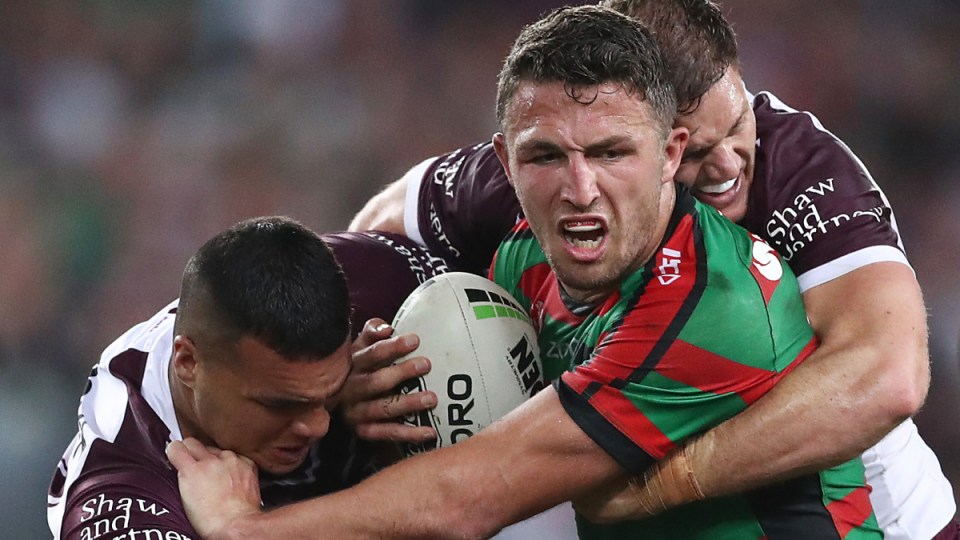 South Sydney is one win away from just their second NRL grand final in 38 years after ending Manly’s season with a controversial 34-26 semi-final victory.

In a seesawing match that saw the lead change hands five times, Manly were twice reduced to 12 men in the second half at ANZ Stadium on Friday through sin-bins for professional fouls.

The Rabbitohs made Manly pay while the NSW lock was off the field, helping set up a date with Canberra in next Friday night’s preliminary final.

They scored almost immediately when John Sutton stepped through a gap from close to the line to level the scores at 26-26.

Wayne Bennett’s men then took the lead moments later, after Jorge Taufua and Brendan Elliot spilled a bomb to hand the Rabbitohs possession close to the line.

The turnover led to Cameron Murray scooping up pass before he scooted over to cap a strong individual performance which included the last pass for the Rabbitohs’ first try.

Adam Reynolds then iced the game with a minute left on the clock, with a penalty goal when Manly failed to kick a drop out before the shot clock expired.

But the Bunnies also had their challenges.

Cody Walker was sin-binned in the first half for a slap on Jack Gosiewski, while Alex Johnston and Adam Doueihi both left the field in the second half following a head clash.

The Rabbitohs sprinted to an early 10-0 lead through two penalty goals and a try to Walker in the opening 15 minutes.

Manly then looked to have control of the match, as centre Moses Suli monstered Sutton in the lead up to one try, then Gagai before another.

Brad Parker, Gosiewski and Corey Waddell also crossed as they continued their career-best form under coach Des Hasler, to give the Sea Eagles a 26-20 lead.

But the match was due to have one more twist, extending Souths’ season into the third week of the finals and ending depleted Manly’s against-the-odds run.