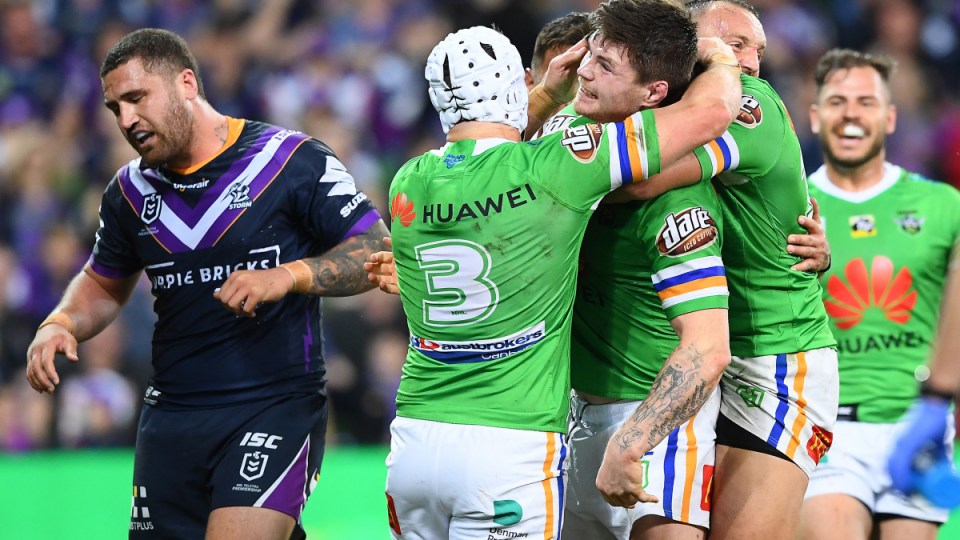 Can Storm bounce back after its shocker against the Raiders? Photo: Getty

The Game Of Thrones series was revered for its ruthless storylines and the unexpected despatch of heroes.

The first week of NRL finals provided the same kind of feeling, albeit without the gore.

The Dragons may not be flying, but the Roosters were certainly breathing fire and humbled the Rabbits.

The return of Luke Keary for the Tri-Colours against his old club set the scene and in the first 40 minutes he absolutely tore apart Souths.

His is a perfect combination of a potent running game, deft passing that ensured a couple of tries and perfect execution of his kicking game. His influence will be felt as the finals progress.

Keary’s character also shone through after the match when he immediately moved attention to the unsung heroes of the Roosters team.

Isaac Liu, Sio Siua Taukeiaho and Mitch Aubusson laid a strong platform for the Roosters to launch their assault and it’s no stretch to say they have stamped a claim to outright flag favouritism.

In defeat, master coach Wayne Bennett took the heat off his  demoralised team by admitting he made a selection mistake moving Adam Doueihi to the wing from fullback.

This is an astute strategy given the Rabbitohs now have to butter up against the Sea Eagles on Friday. They have been able to do so, with the coach taking the blame for the failures of last weekend.

Melbourne Storm’s debacle against the Raiders made Game of Thrones look like a picnic.

It wasn’t Dragonfire that set the tone though, but fireworks sparks that upended Storm’s planning.

The ridiculous pyro eye injury inflicted on the Raiders’ Joey Leilua meant he wasn’t able to take to the field at the start of the game – a shocking state of affairs and one that, strangely enough, affected Storm more than Canberra.

The mayhem that ensued appeared to be more of a distraction to Storm, with the Raiders having to restructure their whole backline bringing on Bailey Simonsson, who subsequently scored in the fourth minute with his first touch of the football.

The ebb and flow of this continued for the next 76 minutes and it was fitting that it was the vision-impaired Leilua who came up with the miraculous flick pass to put John Bateman over for a try.

Add to that Suliasi Vunivalu’s athleticism to leap and grab the ball centimetres in from the sideline only to see the touch judge raise his flag, with the replay showing it was the wrong call.

Finals always brings the drama. And for Storm the plot twist now means there’s a cliffhanger looming in this Saturday’s match against the Eels

The other two games also saw carnage writ large on some old favourites.

Manly Sea Eagles limped into the game with a depleted squad given little to no chance of overcoming a star-studded Sharks team.

This also didn’t go to script with the home team blowing a shell-shocked Cronulla into the off-season and retiring one of the game’s big personalities at the same time.

Then, if we thought Paul Gallen’s exit was hurtful, Parramatta’s execution of Brisbane showed no mercy.

The young Broncos team put the white flag up early in the contest, with Mitch Moses and Dylan Brown showing the Eels are up for the fight going forward.

After the game Broncos coach Anthony Seibold read the last rights to some of his team, with 2020 clearly going to be tough at Brisbane.

This week the plot twists may not be as surprising and I’d expect the Rabbits will bounce back with the return of Sam Burgess and their  usual three-quarter line.

Even with the return of Marty Taupau, it’s hard to think the Sea Eagles will last another week.

Two weeks ago it would have been close to impossible to tip Parramatta against Storm in a semi-final, but the confidence and momentum garnered last Sunday will give Storm a headache.

We know Craig Bellamy will find a way to get Melbourne back into a rhythm and I’d expect them to be at full ramming speed on Saturday.

Tune in for more unexpected twists and turns.