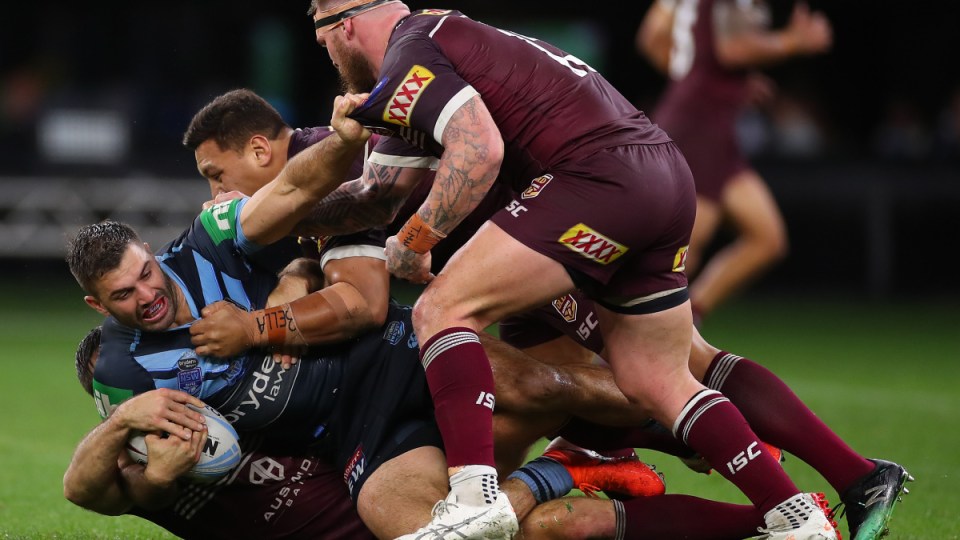 Action from the second 2019 State of Origin game in Perth. Photo: Getty

A disease linked to repeated concussions in American sport has been found in the brains of two former Australian rugby league players.

The discovery is the first time chronic traumatic encephalopathy has been identified in an NRL athlete.

Researchers and clinicians from Royal Prince Alfred Hospital, NSW Health and the University of Sydney’s Brain and Mind Centre made the discovery in two donated brains from middle-aged former professionals who played more than 150 NRL games over many years.

Their identities have been kept confidential.

“I have looked at about 1000 brains over the last 10 years and have not seen this sort of pathology in any other case before,” he said on Thursday.

“The fact we have now seen these changes in former rugby league players indicates they, and likely other Australian collision sports players, are not immune to CTE, a disease that has gained such high profile in the United States.”

Former Manly rugby union player Barry “Tizza” Taylor is the only other case of CTE identified in Australian sport.

The disease, originally called punch-drunk syndrome to describe the plight of ex-boxers, often leads to depression and other behavioural disturbances in younger people.

Symptoms in older people, however, may be indistinguishable from Alzheimer’s disease. It can only be diagnosed confidently by examination of the brain after death.

The only known risk factor for CTE is repeated concussions and blows that don’t cause signs or symptoms.

The head of the Concussion Legacy Foundation in Boston labelled the Australian research – published in the international journal Acta Neuropathologica Communications on Thursday – a “ground-breaking” discovery.

“We hope the first proof of CTE in rugby league inspires the Australian scientific community to mobilise in the fight against CTE and advances the conversation on reforms to sport that can prevent this disease,” Dr Christopher Nowinski said.

It’s estimated there is one concussion every 3.35 games of professional rugby league. That rate might be significantly higher in youth competitions, the study noted.

“Given that brain autopsy is rarely pursued these days, even in cases of suicide referred to the coroner, it is difficult to assess whether these two CTE cases are serendipitous findings or emblematic of a more common issue with rugby league and other Australian football codes,” the paper said.

More than 80 athletes have pledged to donate their brains to the Australian Sports Brain Bank set up by Associate Professor Buckland in 2018.

The NRL said it would review the study’s findings before making any detailed comment. It  noted its approach to management of head injuries was based on global best-practice.

“The NRL has significantly increased its focus and investment in this area of player safety and will continue as an active participant in the work of the global sport community to advance the understanding and management of head injuries in contact sport,” a spokesman said on Thursday.

The Rugby League Players Association said the game in Australia had led the way with a host of initiatives in recent years.

“While this particular study relates to rugby league, it’s important to note that this is an issue across a range of sporting codes and that we will continue to promote collaborating and further investment in this area to ensure athletes are informed and protected at all levels,” a spokesman said.