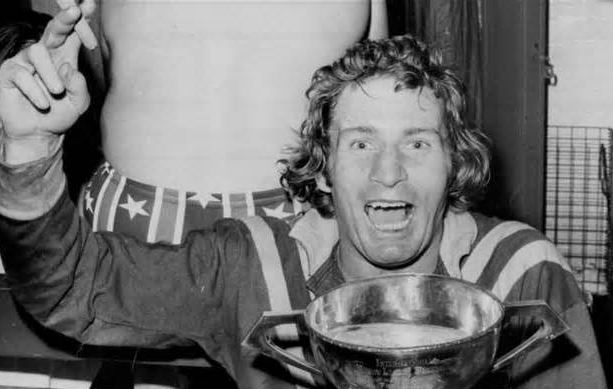 Graeme Langlands celebrates another of the many triumphs in a career blighted at the end by sex-abuse charges.

The former St George Dragons fullback had dementia and Alzheimer’s and died at the Sutherland Shire nursing home where he was living.

He is one of only eight rugby league Immortals.

In November 2017 he was charged with six counts of indecent dealings with a girl under 16, dating back to the early 1980s on the Gold Coast.

His lawyer argued he was unfit to stand trial due to his “poor state of health” and significant cognitive impairment.

“He is heavily medicated over the course of each day and his dementia is well advanced,” she said at the time.

His neurologist said repeated concussions during his playing career contributed to his condition.

In December, the matter was adjourned until March this year so an application could be made for the case to be heard in the Mental Health Court.

NRL chief executive Todd Greenberg said the “rugby league world has lost a giant” with the passing of Langlands.

“There are only eight immortals and Graeme is one of them… that says it all,” Mr Greenberg said.

“He was such a dominant player in his era… so many fans would remember growing up watching ‘Changa’ at his best.”

He was a key player for the Dragons during the team’s dominance of the competition in the mid-1960s, and made the fourth-most appearances by any player in Kangaroos’ history.

He was also awarded a MBE for his contribution to rugby league upon his retirement from the game and inducted into Australia Sport’s Hall of Fame in 1986.

‘Best side stepper of all time’

‘The King’ Wally Lewis, who was added as an Immortal at the same time as Langlands, said a lot of modern players look to the skills Langlands displayed week in and week out.

“Langlands was one of those attacking stars that just seemed to have that little bit extra every time,” Lewis said.

“Brilliant attacking player but arguably the best side stepper of all time.

“The players who were playing alongside him regarded it as a real privilege to be in the team with him.”

Steve Edge, who captained the Dragons in their 1977 grand final win, described Langlands as “freakish”.

“They’d kick the ball down to him and there was no way the first defender could get hold of him,” Edge said.

“That sidestep he had was the best ever.”

Bob McCarthy, who was vice-captain to Langlands on the 1973 Kangaroo Tour, said playing against him was like “trying to catch a sheep all day”.

“He was indestructible as a football player,” McCarthy said.

“He was as tough as nails… and led by example.”

McCarthy said Langlands was aggressive on the field but very quiet off the field.

“Until you got a couple of beers in him,” he said.