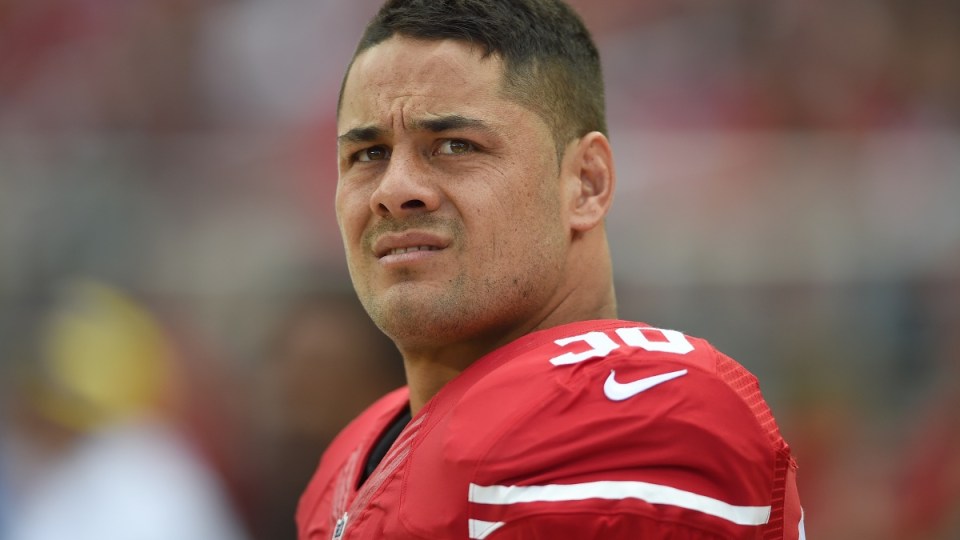 NRL star Jarryd Hayne has been accused of raping a drunken woman during his time at the San Francisco 49ers. Photo: Getty

Code-hopping sports star Jarryd Hayne has vehemently denied allegations he raped a US woman during his time with the NFL’s San Francisco 49ers.

A woman filed a civil complaint in California which alleges a drunken Hayne took her back to his San Jose home after a 49ers game December 2015 and raped her while she was heavily intoxicated.

Documents lodged in a County of Santa Clara court state the woman had previously met some of Hayne’s friends while working at a restaurant and a group went out drinking after the December 20 NFL game before taking an Uber home with the NRL convert.

The matter was reported to local police in May 2016 and investigated, but was dropped due to a lack of evidence.

Hayne’s legal representative, Ramy Qutami, said his client previously provided “all reasonable assistance” to the 2016 investigation before it was dropped.

“Mr Hayne has not been served with any proceedings or formal complaint relating to the incident,” Mr Qutami said.

“Mr Hayne unequivocally and vehemently denies the allegations, which are the subject of the civil complaint.”

The woman’s claim documents said Hayne admitted to the woman they had “hooked up” and told her they had shared consensual sexual activity.

Despite the district attorney’s office in California informing the woman there “was not enough evidence to prove the crime of rape beyond a reasonable doubt”, her lawyer stated the woman was so intoxicated she was “unable to consent to sexual intercourse”.

“Mr Hayne brought our client back to his home, approached her in the dark, turned her around as to not face him and told her ‘no kissing’,” her lawyer, John Clune, said in a statement.

“He then had non-consensual sexual intercourse with her.”

The woman, referred to as Ms V, is seeking monetary compensation for “emotional pain, anguish and severe distress”.

She also claims she took Hayne’s “undergarment” after the alleged rape in case she needed proof of the incident.

Hayne’s NRL club, Parramatta, said they were unaware of the allegations until Wednesday.

“The club has been made aware of serious allegations regarding Jarryd Hayne during his time with the San Francisco 49ers,” Parramatta chairman Max Donnelly said in a statement.

“We were unaware of these allegations until they were made public today.

“As with any legal matter, it is important that we follow due process and ensure that we review all relevant information available, including giving Jarryd the opportunity to respond.

“The club will continue to monitor the situation and when appropriate we will provide an update to members and media.”

“We note the police in the United States did not proceed with any criminal proceedings but we will review the information available and continue to monitor the civil case,” a spokesman said.

Hayne left the Parramatta Eels after a stellar NRL career to chase his dream of playing American football in the NFL.

He won a contract with San Francisco before he was released after just one season.