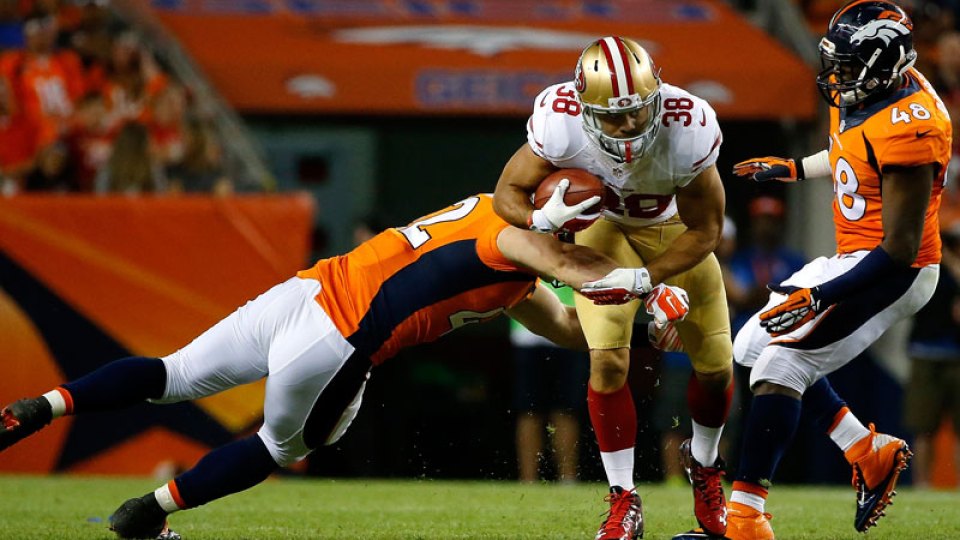 NRL star Jarryd Hayne has been sued for alleged rape in a civil lawsuit filed in California.

San Francisco newspaper The Mercury News reported that a “Ms V” alleges Hayne engaged in non-consensual sex with her in December 2015, during his time with NFL side, the San Francisco 49ers.

The case is a civil suit, not a criminal matter. The plaintiff attempted to bring criminal charges but the local District Attorney’s Office rejected it on the basis of insufficient evidence in October 2016.

Hayne denied the allegations in a statement through Madison Marcus Law Firm on Wednesday afternoon.

“Mr Hayne unequivocally and vehemently denies the allegations which are the subject of the civil complaint,” the statement said.

“My Hayne has not been served with any proceedings or formal complaint relating to the incident.

He will not be making further comment, the statement said.

Hayne’s NRL club, the Parramatta Eels, said it was unaware of the “serious allegations” until made public today and that it would “continue to monitor the situation and when appropriate we will provide an update to members and media”.

The suit, lodged with the California Superior Court, states that Ms V was a virgin at the time of the alleged rape and had been afraid to come forward until some time afterwards.

Quoting Ms V’s attorney, Micha Star Liberty, the paper said the complainant eventually sought medical treatment for continued vaginal pain in April 2016, with the hospital concluding she had been sexually assaulted and contacted police in San Jose, as required by law.

The court documents state that Ms V was “heavily intoxicated” when she met Hayne in a bar after an NFL game, and that he had later taken her to his home in an Uber.

She recalled being in a bedroom when “the man put his hand on her shoulders and flipped her around so she was no longer facing the man”, according to the court documents.

“The man instructed her ‘no kissing’ and shortly thereafter she felt extremely sharp pain in her vagina,” the documents state.

Hayne and Ms V reportedly knew each other through mutual friends,  Liberty told The Mercury News.

“The victim was a young impressionable woman out with friends in a location and environment she thought she could trust only to find that Mr Hayne [allegedly] used her level of intoxication and his physical stature to deprive her of the ability to make a personal decision about whether or not she wanted to have sex,” Liberty told the paper.

“As a result, she suffered greatly emotionally and physically.”

Hayne left the Parramatta Eels rugby league club to pursue an NFL career with the 49ers, ultimately making their 2015 roster. He played in the 49ers’ first six games, was released in October 2015, returned for two more games and then announced his retirement from the NFL in May 2016.

Soon after, Hayne tried out with the Fiji Rugby Sevens team in the hope of realising his self-confessed dream of taking part in an Olympic Games.

After Hayne failed to make the Fiji side, he returned to play rugby league in Australia, signing with the Gold Coast Titans, where he spent two trouble-filled years.

Hayne last month confirmed he was leaving the Titans earlier than scheduled to return to his original club, the Parramatta Eels.