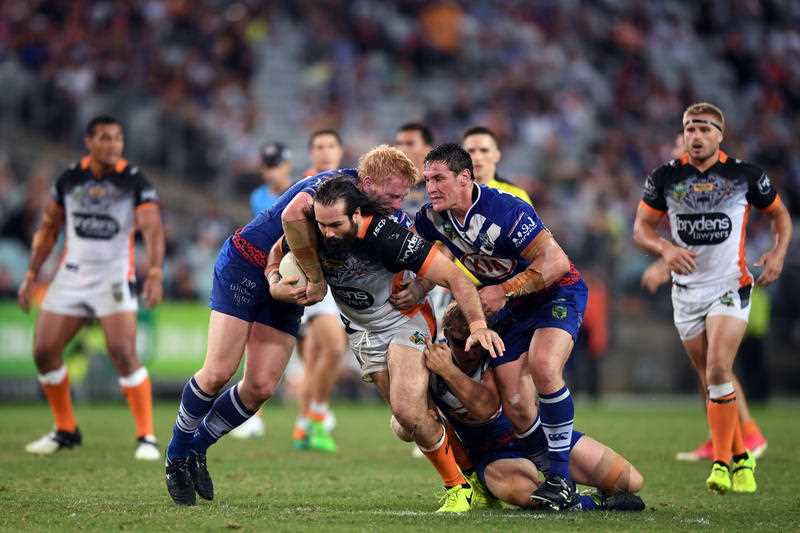 Kangaroos prop Aaron Woods is adamant there won’t be any grudges between him and James Graham in Saturday’s Rugby League World Cup final against England.

Woods faces off against Graham in the decider just months after the England prop was squeezed out of Belmore due to Woods’ decision to join the NRL club next season.

“A lot of people say it probably would be (personal),” Woods said on Tuesday.

“But nah, he was one of the big reasons why I wanted to go to the Bulldogs; to learn off a front-rower like him but in the end it didn’t work out that way.”

Woods admitted Graham had become a good mate after a dramatic year when the pair regularly sat alongside each other as panellists on Fox Sports NRL 360.

The duo fronted up despite protracted contracted negotiations at their respective clubs.

“I wouldn’t have said he was a mate at the start of the year but doing all those things with him this year, I definitely consider him as a mate,” Woods said.

The new Canterbury prop has been named as part of Mal Meninga’s unchanged line up-for Saturday’s final at Suncorp Stadium.

Woods revealed he and Graham had often caught up during the year, and even swapped jerseys following Australia’s tournament-opening win over England earlier in the tournament.

“A lot of the year his partner went home as well, so he was out here by himself and we just caught up every now and then to just see how things were going,” he said.

“He gave me a lot of support with everything that happened. Obviously we were getting hammered a bit here and there throughout the media as you know.

“He just said you’ve got to do what’s best for yourself and I always asked him for tips and he was really good. He always tried to help me out, even when we did play against each other.”

Woods also welcomed England to target him after revealing he would have to play with the aid of a painkilling injection.

Woods was withheld from contact during Tuesday’s training run after aggravating a shoulder injury in last week’s semi-final win over Fiji.

“I sat down with the physio and doc and they just said it can’t get any worse,” he said.

“It’d be aggravating throughout the week and afterwards for a couple of weeks, but it’s a pretty common injury in rugby league, AC joints. Just something to put up with in the meantime.”

Asked if he expected England to target him, Woods said: “Yeah it’ll be alright, but I won’t be able to feel it on the field. It shouldn’t be too bad. It’d probably be a bit sore after the game.”

Josh McGuire missed most of Tuesday’s field session as he battles an ankle complaint, however Will Chambers (toe) and David Klemmer (sternum) trained strongly.