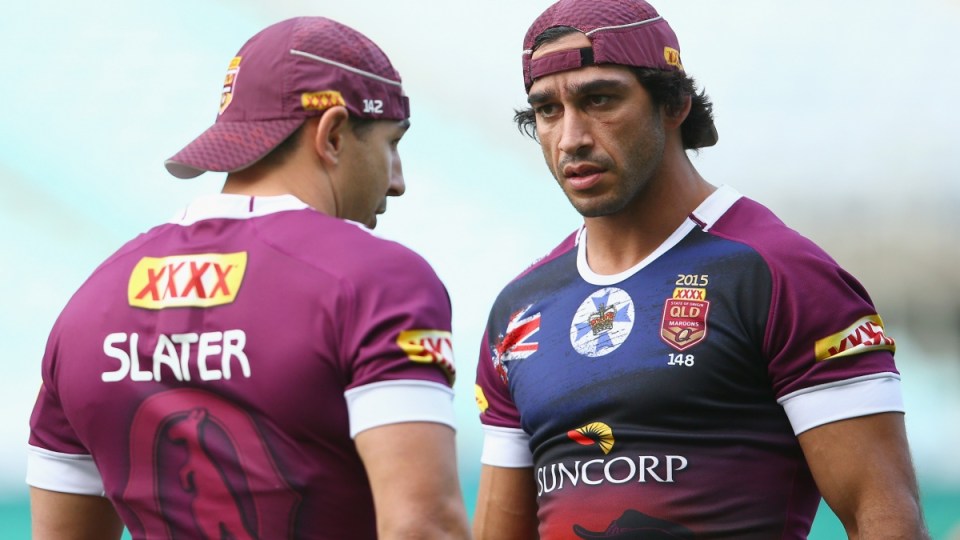 Two key Maroons will watch from the sidelines after selection snubs. Photo: Getty

Emotional Queensland coach Kevin Walters fought back tears as he revealed Maroons legend Billy Slater was not in his 18-man squad for next week’s State of Origin opener against New South Wales.

Slater, a veteran of 27 Origin matches, has not played for Queensland since 2015 due to injury but was expected to return to full-back for the Suncorp Stadium clash.

Queensland’s selectors opted for Darius Boyd at no.1 instead, though, something Walters admitted on Monday was a “very tough decision” before almost breaking down.

“For me, Billy Slater is the best full-back in the game, in the world,” Turner told Fox Sports News.

“Darius Boyd is a wonderful player but he’s done a wonderful job for Queensland when he’s been on the wing.

“I’d have Slater in there … I think he should have been selected.”

Star Johnathan Thurston was named at 18th man in the Queensland squad as he continues to battle a troublesome shoulder injury.

Walters said the veteran would be given all the time he needs to prove his fitness, but that Anthony Milford would play at five-eighth if Thurston was not fully fit.

“We felt the best way to handle the situation was to name a nominated 17 and then give Johnathan every chance to try and prove his fitness over the week,” Walters said.

“We feel Anthony deserves an opportunity to show everyone that he is capable.

“We just felt that Anthony is the right choice.”

Despite the loss of Slater, and potentially Thurston, Queensland’s squad still looks strong with the likes of Cameron Smith, Sam Thaiday and Cooper Cronk vastly experienced at Origin level.

New South Wales – who won game three in Brisbane last year – will enter this year’s opener in the same city full of confidence.

With Paul Gallen having retired from representative duties, Sydney Roosters second-rower Boyd Cordner is the Blues’ new skipper, and will lead a side headlined by the inclusion of debutant Nathan Peats and the returns of halfback Mitchell Pearce and code-hopper Jarryd Hayne.

Peats won a three-way battle against Peter Wallace and veteran and long-time Blue, Robbie Farah, for the spot at hooker.

Wallace looked set to be given the gig, only to injure his groin, but Peats has impressed for the Gold Coast Titans this season.

“It’s an unbelievable honour for me personally,” Cordner told Fox Sports News when asked about his new role.

“I think it’s one of the highest honours you can get, captaining your state.

“Finding out off [coach] Laurie [Daley] was an unbelievable feeling .. a lot of joy, maybe a few tears.”

Cordner is impressed by the New South Wales team and says his side’s halves pairing of Pearce and Cronulla’s James Maloney can prove the difference.

“It’s a great team. Everyone that has been selected has been in some great form this year,” he added.

“Especially with our halves at the moment – I think they’re playing some outstanding footy.”

Manly’s Jake Trbojevic will also debut for New South Wales, who have made six changes to last year’s side.

Queensland squad for State of Origin I

New South Wales squad for State of Origin I