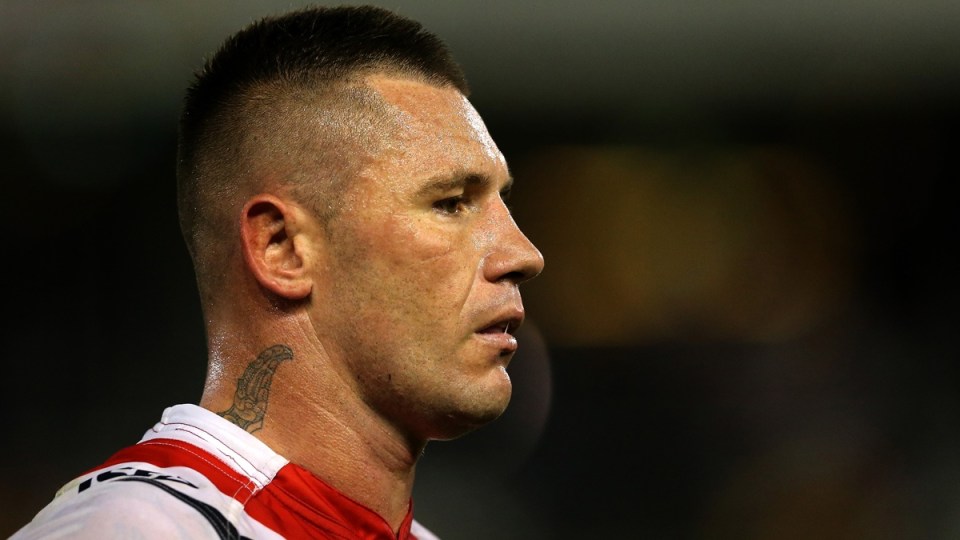 Shaun Kenny-Dowall has been stood down by the Roosters. Photo: Getty
analysis

We are almost at the stage where autocorrect on your smart phone adds ‘scandal’ after you type in the words rugby league.

And there’s not much room left in the code’s Hall of Shame, either.

The alleged cocaine scandals that rocked rugby league last week added another layer of disgrace to a typically turbulent season.

We’ve only just hit May but this year we’ve already had a player deregistered for betting against his own team and ripping off charities.

The same man, Tim Simona, confessed to cocaine and gambling addiction, while earlier this month Newcastle’s Jarrod Mullen was banned for four years for taking a banned steroid.

Then, last weekend, Cronulla chairman Damian Keogh, Sydney Roosters star Shaun Kenny-Dowall and Sharks youngster Jesse Savage – all in separate incidents – were charged with the possession of an illicit substance.

New Zealand captain Jesse Bromwich and teammate Kevin Proctor allegedly bought and consumed cocaine in Canberra and both players have this week been hit with suspensions from their club sides.

Only last year, Cronulla full-back Ben Barba was banned for 12 matches for testing positive to cocaine, while Parramatta star Corey Norman was suspended for eight weeks for possessing an illicit substance.

Norman was also warned about consorting with criminals.

Can you see the pattern here?

Anyone can see the current strategy isn’t working – and that’s why it is time for change. Time the code got serious.

NRL CEO Todd Greenberg must have the most difficult job in world sport controlling this rabble while talking up the NRL brand.

But Greenberg and other League ‘heavies’ simply can’t keep trotting out the old line that the prevalence of drugs in the NRL is commensurate with usage in the broader society.

Such comments are little more than brand protection.

And they mask the inconvenient truth that the NRL has a problem with drugs.

Even the players admit it.

“You’d probably say there is a problem and it probably needs to be addressed,” Melbourne Storm star Billy Slater said this week.

So, what’s the solution?

Currently, players are given a warning when they first test positive to illicit drugs, in addition to counselling.

A second positive test comes with a 12-match ban – like the one Barba got. If there’s a third, more serious punishment follows, which is determined by the NRL.

A start could be the NRL adopting the method spelled out by Kangaroos coach Mal Meninga and legend Peter Sterling.

Both want a 12-week ban at the first offence and two-year bans for a second offence in a bid to clean up the game.

“Call me harsh, call me old-fashioned,” Meninga told The Courier-Mail.

“But the game needs a stronger stance. The NRL’s drugs policy is too lenient because players keep doing it.”

As a further word of warning, Meninga added: “Taking drugs is against the Kangaroos’ core value systems … if any player transgresses [and takes drugs], they will give someone else an opportunity to play for Australia.”

League great Tommy Raudonikis said on Channel Nine on Thursday that “every f***ing body is using it”.

“Anyone allegedly caught with drugs, in possession or use or whatever, should first of all be stood down, and if they’re found guilty, they should be sacked. None of this messing around,” he said.

What finally might make the NRL sit up and take notice is the cash.

Sponsors are now re-evaluating their support for clubs, with investment company Infinity Group Australia reportedly withdrawing their sponsorship of the Sharks and Roosters after the alleged antics of last weekend.

The same company pulled big money out of Parramatta after their salary cap breaches last year and will, according to reports, cancel their $700,000 deal with the Sharks. The Roosters stand to lose about $300,000.

That is big money and the message is clear.

Sponsors don’t want to associate with drugs or cheats.