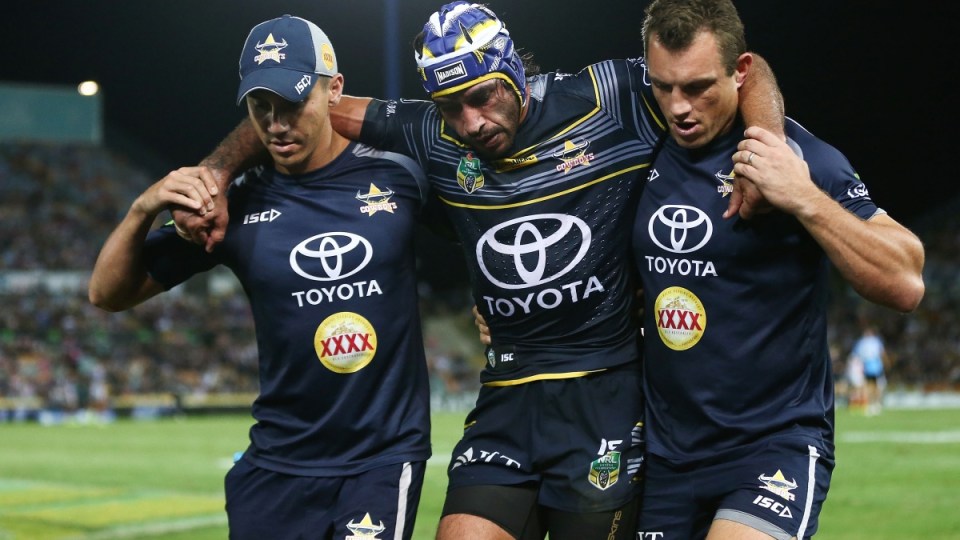 Johnathan Thurston and the Cowboys are counting the cost. Photo: Getty

St George Illawarra have shot to the top of the NRL ladder ahead of Melbourne, but Queensland’s headline clubs are licking the deepest wounds.

In a horror weekend for Queensland halves, Johnathan Thurston and Ben Hunt both suffered leg injuries which threaten to keep them on the sidelines for at least a month.

North Queensland will sweat on the result of scans on Thurston’s right calf on Monday, after he was taken from the field in the dying minutes of their shock 26-16 loss to Wests Tigers on Saturday.

The result made the Tigers just the second team in nine attempts to win their first game under a new coach mid-season since late 2012, and ended a week of turmoil for Ivan Cleary.

But it could prove to be an absolute disaster for North Queensland.

Already without prop Matt Scott for the rest of the season and hooker Jake Granville for six weeks, they have won just three of their past 13 without Thurston.

Meanwhile Hunt has already been ruled out for up to eight games after he tore his hamstring in Brisbane’s 32-8 win over Sydney Roosters on Friday.

With Benji Marshall also injured, the Broncos will likely have to play Kodi Nikorima in the halves – the same man they’re likely to opt against replacing Hunt with in the long-term once he goes to St George Illawarra next year.

Queensland Origin halfback Cooper Cronk got through the weekend without injury, but Melbourne lost their grand final rematch against Cronulla, who climbed to third on the ladder.

Just five days after announcing he was leaving the club, Cronk’s Storm failed to score a try in a game for the first time since June, 2015, in their 11-2 loss to the Sharks on Sunday.

The loss ended the Storm’s winning start to the season and elevated the Dragons to the top of the ladder for the first time in two years, after they flogged Manly 35-10 on Saturday.

The competition’s original ladder leaders Parramatta suffered their fourth successive loss when their once anticipated saviour sunk their hopes in New Zealand.

A year after walking out on the Eels, Kieran Foran took on the line and provided a lovely pass to winger Ken Maumalo give the Warriors the 22-10 win, just as Parramatta threatened to mount a comeback.

Canterbury, South Sydney and Canberra were the weekend’s other winners over Newcastle, Penrith and Gold Coast respectively.

Sharks maul Storm on a horror weekend for Queensland halves