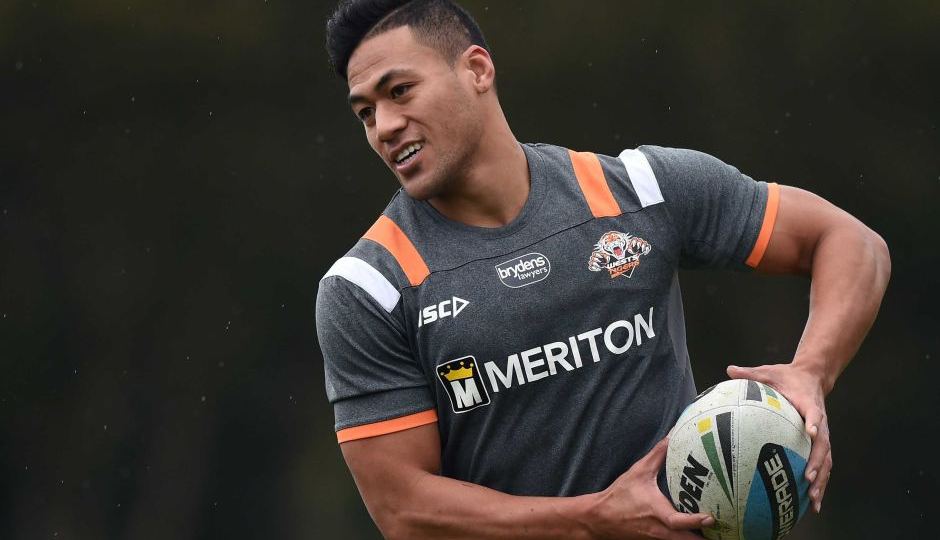 Tim Simona will not be back in the NRL any time soon, according to the league's CEO. Photo: AAP

West Tigers back Tim Simona has had his registration terminated by the NRL for breaching the league’s gambling rules.

It also said he had failed to tell the truth when interviewed by the integrity unit and auctioned off jerseys under the pretence of raising money for charity but kept some of the proceeds for himself.

“Based on the evidence we have identified it is very hard to imagine that Tim Simona will be registered with the NRL at any time in the future,” NRL chief executive Todd Greenberg said in a statement.

“There is nothing more important than the integrity of our game.

“Our fans have a right to expect that every player on every team is doing his best to win each game and we will be relentless in dealing with anyone who attempts to breach this trust.”

In a press conference, the league boss said the integrity unit had found no evidence that Simona had change his play to ensure he won what Mr Greenberg labelled “modest” bets.

“At the end of the day he has deliberately flouted the laws of the game for his own gain and there is no place for him in the NRL,” Mr Greenberg said.

“This is a warning to everyone in our game that if you try to meddle with the integrity of the game you will be caught and the consequences will be harsh.”

Mr Greenberg said he was affronted by Simona’s auctioning of West Tigers’ jerseys and keeping the money.

“All I can tell you is that he was putting forward opportunities to sell jerseys and putting that money to charities, and that money did not go to the charities,” Mr Greenberg said on Friday.

“I personally feel sick in the stomach when I hear something like that. That’s abhorrent.”

Mr Greenberg said the 25-year-old had cheated many of his buyers via social media, however it was unclear how many jerseys he tried to sell or how much money he had stolen.

Mr Greenberg said Simona clearly had personal issues, and the game would offer welfare services and monitor his wellbeing.

“He has worked very hard to become and elite athlete and he has now thrown that away,” he told reporters.

The Tigers said they were “incredibly disappointed” but fully supported the league’s call to deregister the 25-year-old and the club’s chief executive, Justin Pascoe, said they would also ensure “Simona receives the welfare support that he needs”.

“At Wests Tigers we are very proud of our position in the community,” he said.

“We will not allow the actions of an individual player to jeopardise what this club stands for and represents.”

Pascoe said he was “100 per cent confident that this is isolated to Tim Simona”, and integrity unit boss Nick Weeks said there was no evidence anyone else was involved.