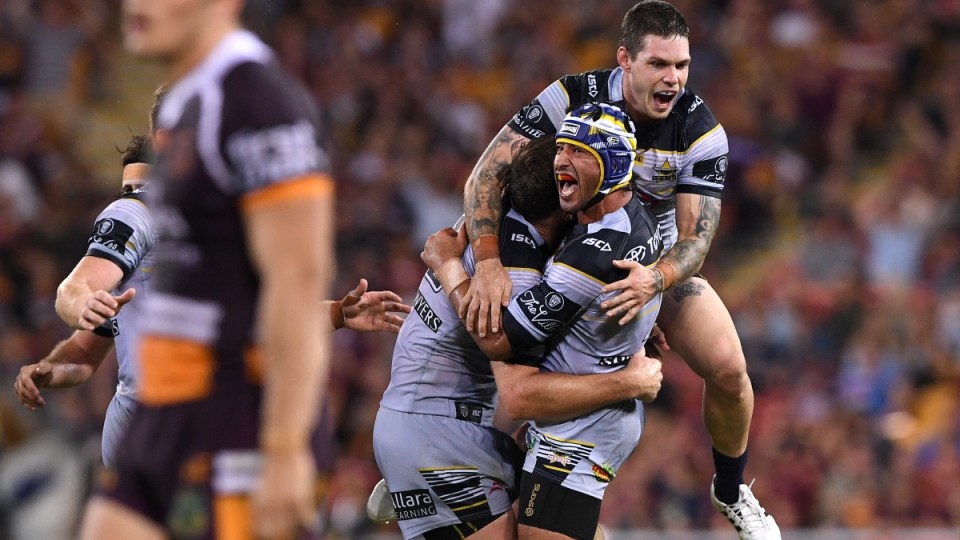 Johnathan Thurston and teammates react after he kicked the match-winning field goal against Brisbane. Photo: AAP

Something had to give after the Queensland derby went into extra time for the fourth time in five clashes.

Enter Thurston. A week after a duffed field-goal attempt led to the Cowboys’ opening-season win, Thurston made no mistake when he stepped up in the 88th minute to bring the 47,703-strong Suncorp Stadium crowd to its feet.

He broke Brisbane hearts, just like he had in the unforgettable 2015 grand final.

It capped a memorable night for the Cowboys’ playmaker, who became only the sixth player in Australian rugby league history to crack the 2000-point barrier when he converted a 19th-minute try by a barnstorming Coen Hess.

Hours earlier in Auckland, Melbourne Storm skipper Cameron Smith had become the first forward in NRL history to score 2000 points in his side’s 26-10 win over the Warriors.

The other players to have reached the milestone are Hazem El Masri, Andrew Johns, Jason Taylor and former Kiwis winger Daryl Halligan.

“Thurston’s been texting me a fair bit over the past couple of weeks, asking who’s going to get there first, but I got him this time,” Smith said.

“I’m very fortunate that I’ve played for a wonderful club for a long time and alongside some fantastic players.

“It’s something that’ll be very special when I decide to finish up.”

Smith’s Storm outclassed the Warriors in torrential Auckland rain, but it wasn’t all good news for the Queensland and Australian captain.

He might have to face the judiciary after being penalised for a second-half lifting tackle.

Meanwhile West Tigers back Tim Simona has had his registration terminated by the NRL for breaching the league’s gambling rules.