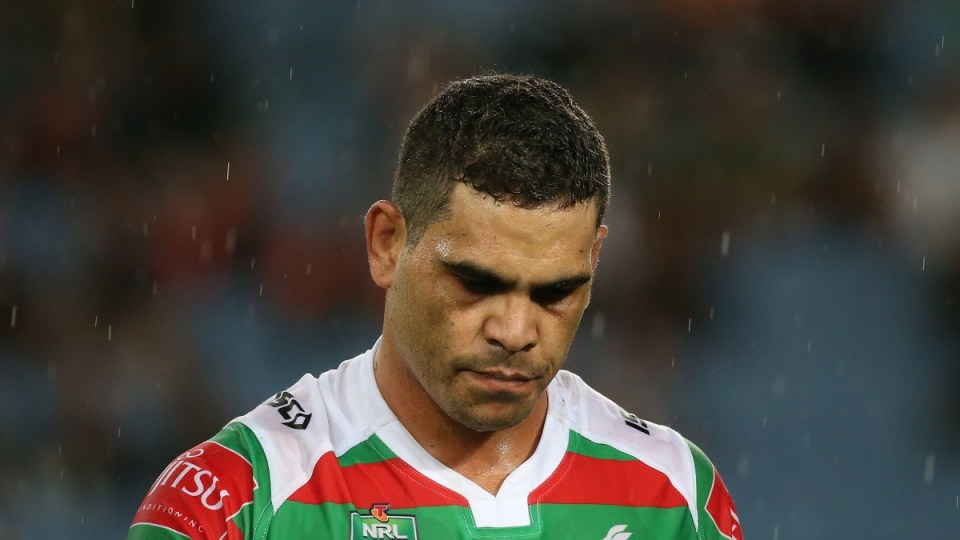 Greg Inglis walks off the pitch during the round 1 NRL match against Wests Tigers at ANZ Stadium. Photo: AAP

South Sydney star Greg Inglis will most likely miss the rest of the season with a torn anterior cruciate ligament.

The Queensland and Australia centre sustained the knee injury in the Rabbitohs’ season-opening 34-18 loss to Wests Tigers, but played most of the match before scans on Saturday revealed he had ruptured his ACL.

Inglis was left screaming and clutching at left knee after being beaten by Tigers full-back James Tedesco in the opening minutes of the clash on Friday night.

He was seen to on the field and a knee injury was diagnosed at the time, but the captain was allowed to play on, even hobbling in for a try just before half-time.

Inglis admitted there were at least two plays in the second half where he “couldn’t really do anything”.

It’s probably one of the worst feelings [to] just be out there and be a passenger.”

He was hidden on the wing in defence, but the Tigers found him and debutant Moses Suli trotted past the immobilised star for an easy try on debut.

Inglis was subbed off immediately after Suli’s try.

Former Manly and New South Wales half-back John Gibbs said Inglis “was basically of no use”.

“I really feel for Greg Inglis because he has been forced to stay out there,” he said on ABC Grandstand’s coverage.

“He can’t play, he can’t run, but the problem long-term [is] does he risk doing further damage? And if that’s the case this is foolhardy leaving him on the field.”

Another ex-NSW playmaker, Peter Sterling, said Inglis had “no mobility whatsoever”, while fellow Channel Nine commentator Phil Gould bemoaned how long it took Souths to take Inglis out of the game.

“Why has it taken so long?” the former State Of Origin coach asked.

“Number one; you can’t risk him. And number two; you don’t embarrass your greats, and he’s been embarrassed tonight having to be left out there.”

Inglis said he felt it was improving as the game wore on and wanted to “push it as far as [he could]”.

Coach Michael Maguire dismissed suggestions Inglis could have done more damage by staying on the field for so long.

“No. I’ve got some very good staff and they were in conversation with Greg throughout the game,” Maguire told reporters.

Rabbitohs general manager Shane Richardson defended the decision to allow Inglis to play about 50 minutes on the injury before Maguire finally took him off in the 58th minute.

“The injury occurred in the first instance in the match, not as a consequence of Greg playing on further,” he said.

“Our medical staff further examined the injury at the half-time break and they felt the knee was stable, and they along with the head coach and Greg himself agreed that he would go on and play in the second half.

I, along with the rest of our club, have the greatest of confidence in our medical and coaching staff to make the best possible decisions about our players’ wellbeing.

“We have the quality of squad to continue our quest throughout the season and Greg, as our captain and senior leader, will continue to play a significant role throughout the year.”