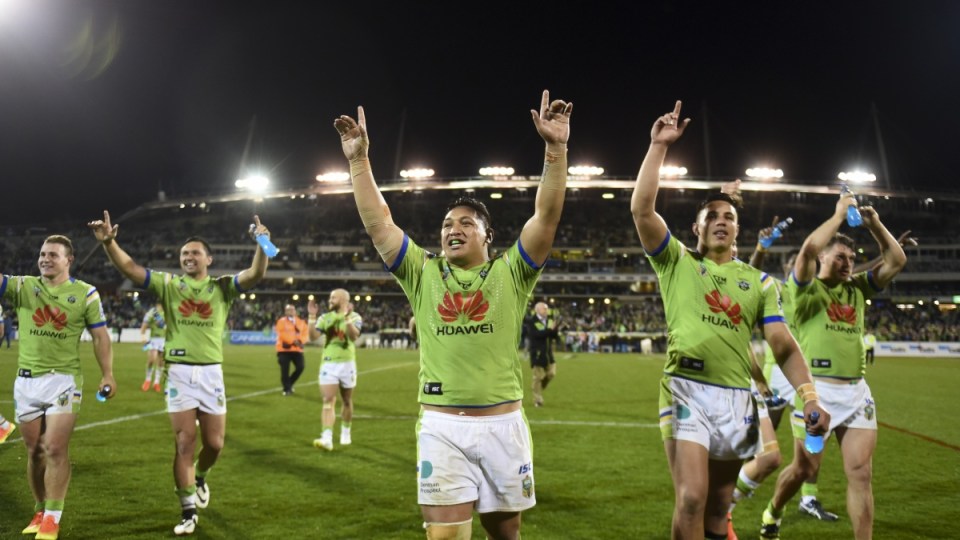 The Canberra Raiders are one win from an NRL Grand Final. Photo: AAP

Canberra are closer than ever to a maiden premiership in the NRL era, beating a fast-finishing Penrith 22-12 in Saturday night’s sudden-death semi-final.

The Raiders survived a late fightback to set themselves a date with minor premiers Melbourne at AAMI Park next weekend for a spot in this year’s decider.

It will be the club’s first preliminary final since the 1997 Super League season, and brings them to within two wins of their first title in 22 years.

Buoyed by the surprise return of star playmakers Josh Hodgson and Blake Austin, the Green Machine made up for their disappointing loss to Cronulla in week one of the finals to dominate most of the match.

They held an 18-0 lead until just before the hour mark, when back-to-back tries threatened to deny them a crack at history in front of 21,498 fans. 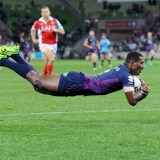 But they held on, despite missing Hodgson in the closing stages after he was taken off for a concussion test.

Hodgson had been rated a slim chance to play after suffering ligament damage and bone bruising in last week’s qualifying final against the Sharks, but the hooker made a miraculous recovery to steer the Raiders to victory.

Austin was also instrumental in his first game back since breaking his hand last month and undergoing surgery.

Penrith fans couldn’t drown out the home crowd’s spine-tingling Viking clap, nor did the men in black themselves have an answer to the Raiders’ rampaging start.

Austin converted a glut of early possession into points in the 11th minute, using his trademark dummy and step to plant the game’s first try with his heavily strapped left hand.

Joy turned to fear when Austin started limping after rolling his ankle, but the five-eighth came good – and so did the Raiders’ right edge.

Dubbed ‘Leipana’, Joseph Leilua delivered a pin-point grubber for Jordan Rapana to dive on and score five minutes before halftime for a 12-0 lead at the break.

It was Rapana’s 21st of the year – equalling the club record for most tries in a season, jointly held by Noa Nadruku (1993), Brett Mullins and Jason Croker (both 1994).

His skipper Jarrod Croker drew closer to a record of his own with another four-pointer and conversion just moments into the second half to extend the lead to 18 points.

The Raiders’ momentum was brought to a sudden halt, with the Panthers staging a comeback with two tries inside six minutes.

Tyrone Peachey crossed over just before the 60-minute mark off a superb long-range pass from Matt Moylan, and was soon followed by a converted Dallin Watene-Zelezniak effort for a six-point game.

But a pair of penalty goals to Croker in the final five minutes denied any chance of an upset victory to Penrith, who bow out of the competition.

To win a semi-final is always a big effort, so I was happy with it,” Raiders coach Ricky Stuart said.

“That experience was very helpful for us – not just for next week, but for our future.

“Now we need to repeat it and be better again.

“We’re playing against the best team in the competition next week, so there’s certainly a challenge and it’s going to be a very, very difficult task.

“But we’ve had belief in ourselves all season – that’s what has got us through and given us extraordinary resilience against some tough situations.”

Stuart revealed post-match that Hodgson had not only battled an ankle, but came down on Friday with a severe stomach bug.