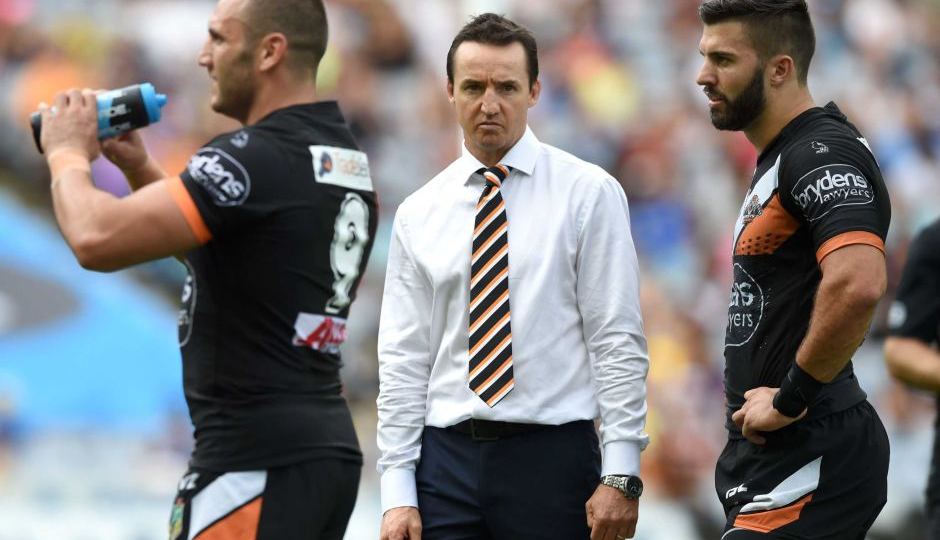 Taylor (centre) denies he has dropped Farah (left) over a feud. Photo: AAP

Andrew Johns has declared Robbie Farah’s position at the Wests Tigers as untenable after his axing to reserve grade.

An emotional Farah on Saturday declared his intention to dig his heels in after leading the Tigers’ NSW Cup side to a 42-24 win over Newtown Jets at Leichhardt Oval.

Despite Farah’s resolve, Newcastle, NSW and Australian great Johns said it was impossible for him to see out the final year of his contract in 2017.

“How could you play if you and the coach don’t get on like that?” Johns told the Nine Network’s Sunday Footy Show.

“He can’t be at the Wests Tigers, I couldn’t imagine how toxic it would be going to training.

“I couldn’t imagine being in that position. It would be awful.”

Just a week after being a part of NSW’s State of Origin III win over Queensland, Farah’s future is in doubt after coach Jason Taylor declared his NRL side was better without the 247-game veteran hooker.

Fellow NSW great Brad Fittler suggested the club should pay out the final year of Farah’s contract, said to be worth $900,000.

“Give him his money and tell him to go. That’s what they want to do, obviously they’re trying to play games and maybe force Robbie to make a move,” Fittler said.

“The guy’s got a lot of pride and maybe they’re thinking Robbie’s pride will get the better of him.”

It is the latest chapter in an almost year-long dispute between the pair, after Taylor told Farah he was free to exit Concord at the end of last season.

“I am entitled to stay. As long as I do that I will keep doing what is required of me,” Farah said.

“I have done that the whole year and that won’t change. However else I get treated is out of my control.

“All I can control is my actions and I will continue to train hard as I have always done.

“I will continue being professional and try and keep my mouth shut and try not to do anything wrong because I think that is what they are trying to get me to do.”

Farah indicated he felt he had been dropped because of the ill feeling between the coach and himself. Taylor denies that is the case.

“I have kept my mouth shut for the last couple of years and it is hard when you see stuff written about you, false stuff, and people saying stuff about you and I haven’t responded,” he said.

“I have just kept copping it on the chin and become a sucker for punishment. I have sat back and really there is nothing to gain by me saying anything. I will let my football do the talking.”

Farah said he was trying to stay upbeat.

“I got put back to the bench a few weeks ago, I didn’t kick stones,” he said.

“I can definitely say I have done my utmost to do what is required of me but it seems that nothing I do is good enough at the moment.”

Farah digs heels in, but Johns says he must go