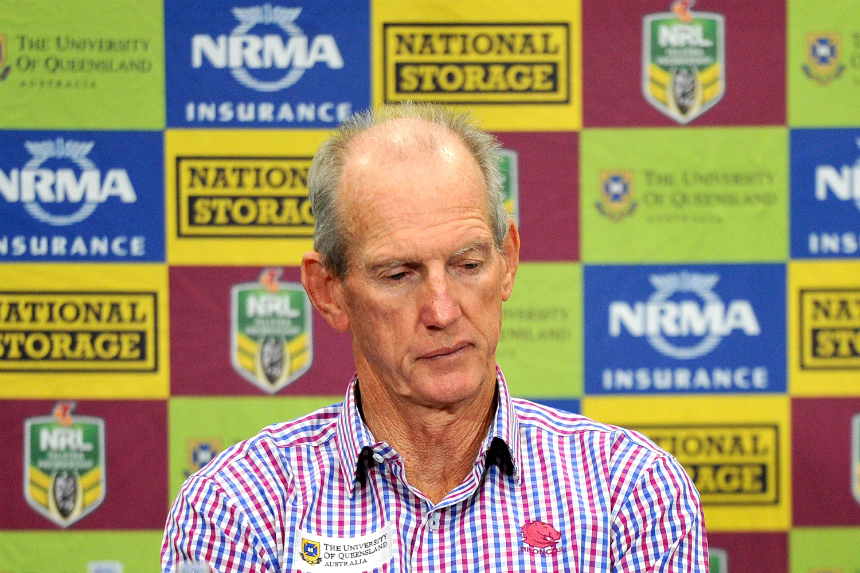 The Brisbane Broncos are standing by their player accused of taking drugs in yet another NRL extortion attempt.

In the same week as an alleged sex tape involving Parramatta’s Corey Norman was offered to media outlets for $150,000, an unnamed Broncos player is at the centre of a reported drug scandal caught on video.

The footage allegedly shows the player snorting a substance off a toilet seat in a Sydney pub, but those who have seen the video say it is unclear who it is due to its low quality.

The player reportedly involved has denied the claims and it is believed that the Broncos became aware of the allegations last week.

When asked about the claims after Saturday night’s 30-16 win over the South Sydney Rabbitohs, Broncos coach Wayne Bennett kept his cards close to his chest.

“I don’t know a great deal about it,” he told reporters.

When pressed on whether the club would be investigating, he said: “No, not to my knowledge.”

The NRL integrity unit is said to be aware of the video.

The tape involving Norman was not paid for by a media outlet, but its existence was reported widely.

Triple M alleged that Norman had in fact sent the video involving him to friends, including Eels teammates, before it fell into the wrong hands.

A video showing Sydney Roosters star Mitchell Pearce simulating a lewd act with a dog at an Australia Day house party was reportedly sold to the Nine Network’s A Current Affair in January.

Pearce was fined $125,000, of which $50,000 was suspended, and banned from playing for eight weeks by the Roosters after the incident became public.

‘The NRL must protect their players’

Roosters coach Trent Robinson said the issue of extortion attempts was something that needed to be taken far more seriously by the NRL.

He said that legal action should have been taken against the party who allegedly sold the compromising footage of Pearce.

“The NRL needs to step in and they need to make it public that you are not allowed to sell these on and we will go after the individuals that do this,” Robinson said.

“They had an opportunity at the start of the year and they didn’t do this, so the Players’ Association didn’t do it either.

“It is important to get on this pretty quickly … otherwise it is going to continue.

“Now we are having cases where people are trying to sell film to outlets.”

Robinson said it was not surprising that further extortion attempts were being made given the lack of action taken by the league.

“The NRL had a choice back then to stamp that out, they decided not to deal with it and now they are coming up with more cases,” he added.

“They have to make sure they lead the way in this and protect their players.

“They didn’t back in Mitchell Pearce’s incident and they need to now.”

NRL rocked by another extortion scandal