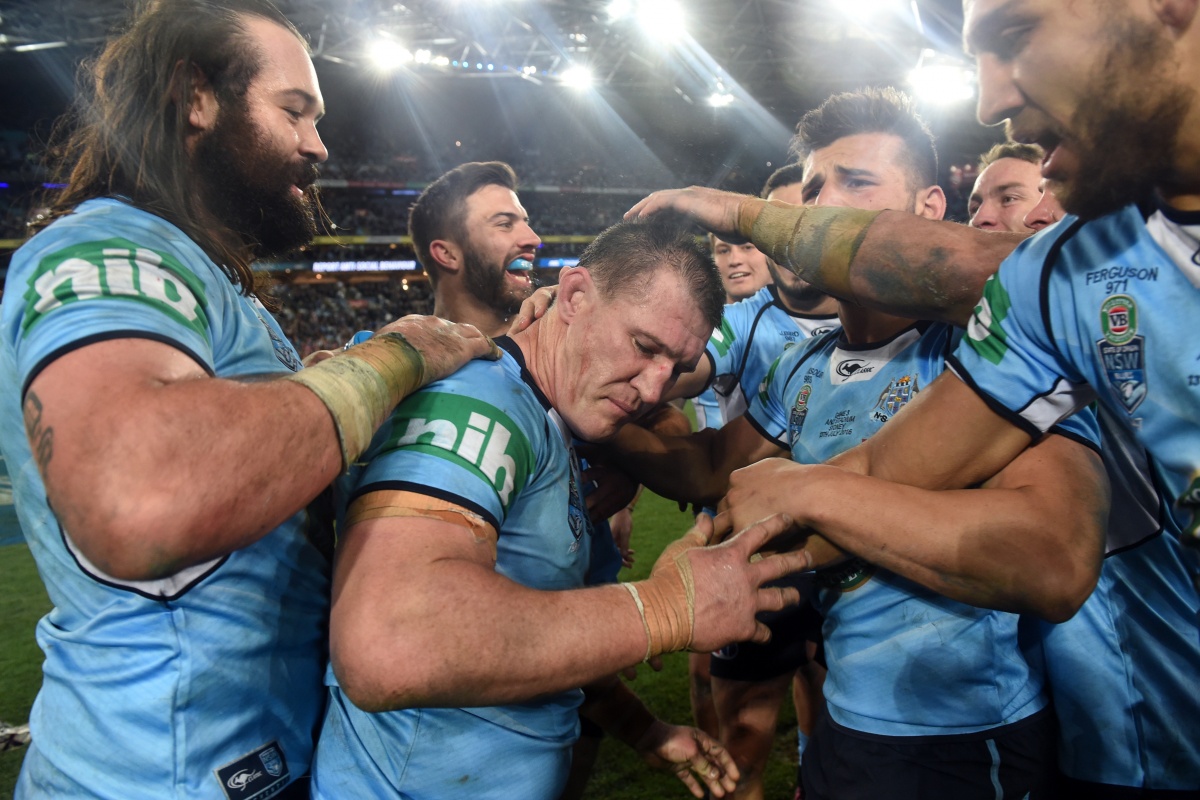 An incredible last-gasp finish, usually the domain of their opponents, delivered a fitting farewell for retiring New South Wales great Paul Gallen – but the 18-14 dead-rubber victory shouldn’t stop coach Laurie Daley from following his skipper out the door.

The Sydney clash seemed set to follow the familiar Origin narrative of a famous backs-to-the-wall Queensland victory, with the Maroons overcoming a colossal possession discrepancy and a string of controversial refereeing calls to hit the front in the latter stages.

The Blues, who dominated throughout, looked to have butchered yet another Origin win on home soil when Queensland fullback Darius Boyd scored a 75th-minute try after NSW winger Josh Mansour slipped over while attempting to field a kick.

But Blake Ferguson made a break from NSW’s half in the dying stages, and a hot-stepping run by Michael Jennings – after symbolically accepting an offload from Gallen – snatched the morale-boosting win with a little over a minute on the clock.

It was also a stark reminder of what might have been.

Failing to take the myriad opportunities presented to them in the first two games, NSW’s long-awaited success – however bumbling it may have been – could so easily have been a 3-0 series win.

The ageing Queensland side, now champions in 10 of the last 11 series, showed their vulnerabilities in all three games – yet were one tackle from a whitewash.

Daley has to take the lion’s share of the blame for what will ultimately be reviewed as a rank failure for the long-suffering Blues.

The Dylan Walker fiasco aside, playing cat and mouse with his five-eighth pick in the lead-up to this match left Daley in a no-win situation after choosing a fullback, Matt Moylan, and a centre, Jack Bird, as his options for the key playmaking roles.

Moylan struggled with the rigours of defending in the front-line and the nuances of playing as a flat first-receiver.

Credit to him, Moylan fought back and played a key role in the late escape, but he is highly unlikely to retain the spot for 2017.

Meanwhile, Bird – one of the premiership’s form right centres – wasted away on the bench until Josh Dugan went down with injury.

As baffling as Daley’s selections have been, though, his tactics – or lack thereof – were arguably even more detrimental to the NSW cause.

After Queensland opened the scoring early with a typically well-worked backline move, the Blues enjoyed a welter of scoring opportunities as the visitors repeatedly coughed up possession and were on the wrong end of a 9-1 caning in the penalty count, including the questionable sin-binning of Cooper Cronk.

All NSW had to show for their mountainous possession advantage at halftime was a 6-4 lead, persisting with an ineffectual lateral attacking game-plan that should have been altered after it failed miserably in the first two games.

The Blues’ first-half try was a hard-running effort from Tyson Frizell off a short pass, which had delivered two of their other three tries in the series to that point (the only exception was a James Maloney intercept in Game 2).

Yet the hapless Blues persisted in going wide, executed poorly and were easily picked off by the Maroons’ well-organised goal-line defence.

The video referee bent the offside rules to the extreme to incorrectly allow an Andrew Fifita try in the first minute of the second half, but that was negated when Queensland debutant Gavin Cooper powered through Moylan to score.

Firebrand Fifita copped 10 minutes in the bin for attacking Cooper after he scored, in a moment of insanity that should ensure he never gets the opportunity to taint another NSW campaign.

But after doing everything they could to throw it away against an ultra-tired team, the Blues somehow found a way to steal the result against a Maroons side that was heroic in defeat.

And Gallen’s fractured fairytale – including the obligatory fulltime conversion attempt – did show signs of promise for 2017.

Man-of-the-match Maloney was magnificent throughout the series, Frizell shone in his two appearances, James Tedesco lived up to the hype on debut, and the likes of Josh Jackson, Aaron Woods, Jennings and Bird demanded retention.

The missing ingredient, however, is an experienced NRL coach – a Cleary or Toovey type – to replace Daley’s restrictive lack of ideas.

Miracle finish should not be enough to save Daley