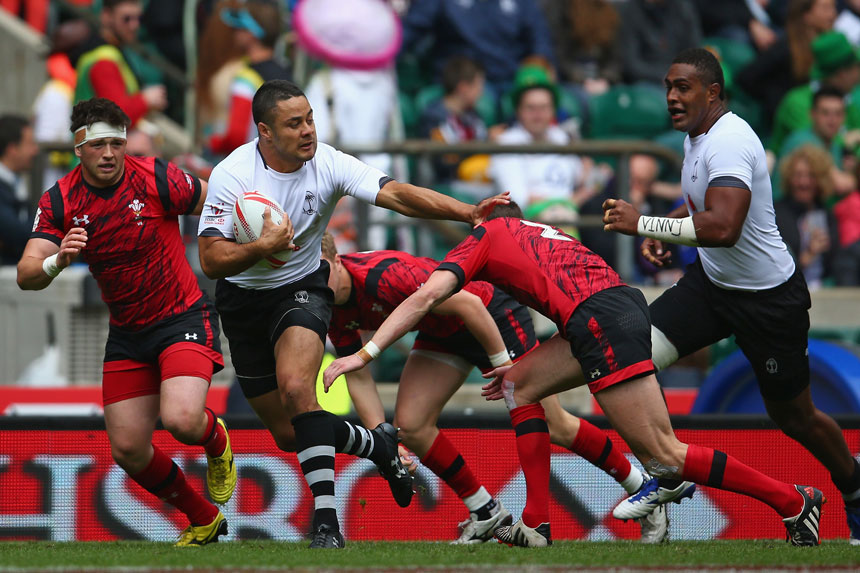 Jarryd Hayne’s switch to Rugby Sevens stunk of self-indulgence from the beginning.

Fiji are back-to-back world champions. Would Hayne have been as eager to head to Brazil with the team if a gold medal was a long shot?

Nowhere in sport is national pride and loyalty more sacrosanct than at the Olympics.

Hayne played for Fiji at the 2008 Rugby League World Cup, when he couldn’t get into the Australian side.

Back in favour with selectors in 2013, he instead starred in the Kangaroos’ World Cup triumph – scoring three tries in Australia’s semi-final drubbing of Fiji along the way.

Hayne’s ill-fated bid to represent Fiji at this year’s Olympic Games thankfully came to an end on Monday when he announced that coach Ben Ryan would not include him in his Rio-bound squad.

His Sevens dalliance followed a brief NFL career with the San Francisco 49ers.

Pundits and colleagues alike fell over themselves to laud Hayne’s bravery in October 2014 when he stunned us all by quitting the NRL to chase his (apparently long-held) NFL dream.

The fact Hayne walked out on a game in which he was regarded as one of the top five players, in his prime at 26, for the slim hope of gaining a contract in an overcrowded American market, fascinated the media.

Hayne may well have overachieved by just making it onto the field in one of world sport’s biggest competitions, but the ‘gimmick factor’ and marketing benefits he brought to the table for the 49ers – the league’s worst team – can’t be discounted as part of their motivation.

After touching the pigskin just 31 times in his eight outings as a running back/return specialist, punctuated by three glaring fumbles, Hayne’s novelty wore off and he was waived by the 49ers, before retiring in May.

Less than a week later, Hayne said he was chasing his new dream of playing for Fiji in Rugby Sevens at the Rio Olympics.

That bid is also over.

While fellow sports-switching superstar Sonny Bill Williams still has an army of critics – and his 2008 walkout on the Bulldogs continues to live on in rugby league infamy – he can’t be accused of failing to put everything into each calculated move.

No one could question Hayne’s commitment at club level or in the representative arena in rugby league, where he ranks among the most explosive talents the game has ever seen, but he has barely dipped his toes outside the NRL.

Pontificating publicly about his next career move last month, Hayne playfully waxed lyrical about his love of red wine and sushi, hinting at a rich rugby union deal in France or Japan.

But an offshore union contract would rapidly see him lose relevance in the eyes of Australia’s sports fanbase.

A Top 14 title with Toulon would mean about as much as leading a Bondi OzTag team to success for the average Aussie.

He’s also been linked to Super Rugby outfit the Waratahs.

Does Hayne really have time to get to grips with another code?

A return to the Eels?

The only way Hayne can regain lost ground and preserve his sporting legacy is by rejoining the Parramatta Eels.

Upon exiting the NRL, Hayne bizarrely said he had achieved everything in rugby league – despite not winning a grand final with the club he came through the junior ranks with.

Returning to Parramatta and leading the club to its first premiership since 1986 would be the western Sydney product’s crowning achievement.

However deep in the mire the Eels appear to be in now, due to a turbulent 2016, they have the basis of a team that can certainly contend for success next season.

Hayne’s presence could be the missing piece of their puzzle.

Marquee recruit Kieran Foran’s likely exit from Parramatta will give the Eels the money they need to secure the signature of Hayne.

It is the only move that makes sense.

Why it’s time for Jarryd Hayne to come home