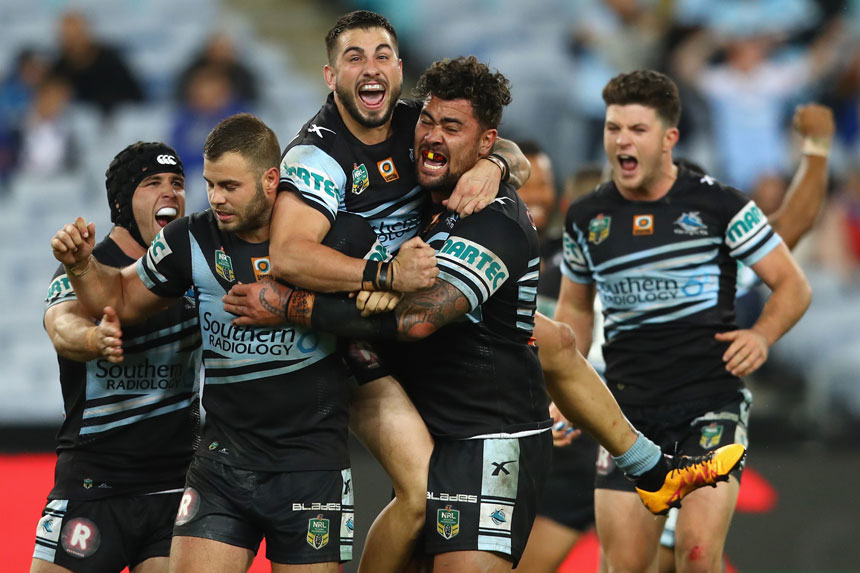 For any club, winning a maiden premiership in their 50th season is a great story.

But if the Cronulla Sharks finally achieve rugby league’s top prize in Australia after the adversity they have faced, it will surely rank as one of the greatest team achievements in the history of Australian sport.

The Sharks sit on top of the NRL ladder on the back of a club-record equalling 11-match winning streak.

An all-important top-four berth seems assured, with their title credentials becoming more compelling by the week.

It’s an amazing feat given where the Sharks have come from.

Two years ago last week, the bottom-placed Cronulla became the first team in Australian history to be held scoreless three matches in a row.

Their coach, Shane Flanagan, was midway through a 12-month ban he received over a peptides supplements scandal and the resulting Australian Anti-Doping Authority saga that enveloped the club and its players.

Put simply, they were a laughing stock.

Star playmaker Todd Carney was sacked soon afterwards following the infamous ‘bubbler’ incident, where he was photographed urinating in his own mouth; captain Paul Gallen was among a group of players who reluctantly accepted short ASADA bans; and the Sharks collected their first wooden spoon since 1967.

Few clubs have hit rock bottom as painfully as they did in 2014.

But Flanagan returned, rallied his shattered troops and took them to the finals last year.

And a magnificent recruitment drive – coupled with the development of some of the NRL’s most exciting talents – elevated the Sharks to their current lofty standing.

Whereas many of the Bombers stars are banned, wily Cronulla veterans Gallen, Luke Lewis and Michael Ennis are complemented by dazzling youngsters Jack Bird, Valentine Holmes and Sosaia Feki.

Then there’s the toughness and X-factor of Wade Graham and Andrew Fifita; the rejuvenation of Ben Barba; the addition of invaluable playmaker James Maloney; and an ultra-consistent support cast including Matt Prior, Sam Tagatese, Chris Heighington and Chad Townsend.

As a result, Cronulla are now the clear premiership favourites, having edged ahead of defending champion North Queensland and heavyweights Brisbane and Melbourne after beating all three during their winning streak.

The history of the Sharks is littered with tales of finals heartbreak, lost opportunities, the threat of financial ruin and long periods out of finals contention.

So the club’s faithful are understandably revelling in the 2016 renaissance.

Mitch Healey, who played 222 games for Cronulla from 1989 to 2000, sums up the mood among fans and former Sharks greats.

“Sometimes you’ve got to go through the bad times to appreciate the good,” he told The New Daily.

Healey said that with 10 rounds still to go, anything can happen.

“But they’ve put themselves in a good position to challenge.

“They play a style that’s suited to finals football, with low mistakes and dogged defence.”

Cronulla lost grand finals to Manly in 1973 and 1978, but arguably the club’s best premiership opportunity came during the late-1990s when the John Lang-coached Sharks lost two preliminary finals and the 1997 Super League grand final in the space of four seasons.

Healey was integral to those sides, but the ex-playmaker believes this year’s squad won’t be weighed down by the club’s title-less history or the failures of seasons gone by.

“You can’t really carry the burden of past teams,” he said.

“Some of those senior guys have been through a premiership win [at other clubs] before and they’ve been around the hype. I don’t think they’re going to be overawed.

“If they stay fully fit, I’ve got no doubt they can go all the way.”