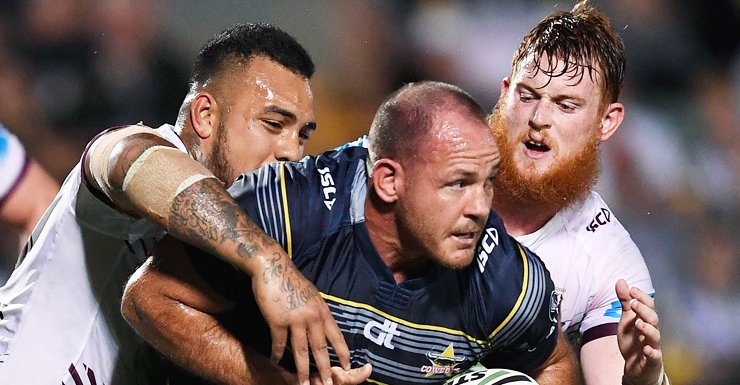 The return of halves Daly Cherry-Evans and Jamie Lyon could not stop Manly slumping to a 30-26 defeat to North Queensland in Townsville on Monday night – their seventh straight NRL loss.

A try-scoring double to Kiwi backrower Jason Taumalolo helped the Cowboys (3rd, 10-5) remain in touch with the top two.

It was the home side’s 10th straight home win, a record stretching back to the end of last season.

While it was an impressive return from Cherry-Evans, which included a first half try, he also had a 73rd minute effort disallowed before his deft kick set up a Lewis Brown four-pointer in the dying minutes to reduce the deficit to 30-26.

But the luckless Eagles couldn’t hang on.

NSW prop James Tamou (65th) bulldozed over and hulking backrower Taumalolo bagged his double (68th) to give the hosts a 30-22 lead.

Manly — boasting a nine-strong injury list — had plenty of new faces in their side, and it showed early.

The Sea Eagles looked out of sorts with unfamiliar combinations, leading to unforced errors and plenty of frustration as North Queensland stormed to an 18-4 halftime lead.

It was the Cowboys’ fifth straight win over Manly, who have all but let their finals hopes slip.

French foreign minister hails defeat of Morrison and his ‘notorious incompetence’
Tiger Woods quits PGA tournament after the worst round of his career
COVID claims 45 more lives as nationwide daily cases soar to 18,000
Volodymyr Zelensky: How war will end as Ukraine ‘breaks backbone’ of Russian army
Peter Dutton touted as next Liberal leader as he claimed victory in Dickson
‘The urgency of the situation’: WHO steps in as monkeypox cases erupt around the world
Melbourne Storm withstand Tigers NRL fightback
Today's Stories