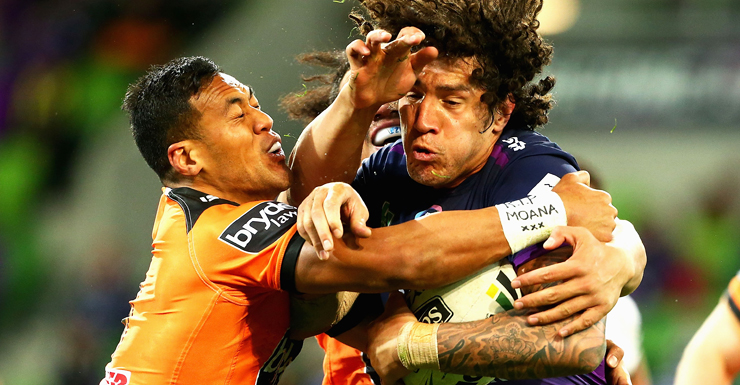 Melbourne NRL coach Craig Bellamy’s plans to give his Origin stars Cameron Smith and Cooper Cronk a second-half breather went out the window as the Storm were forced to defend a furious West Tigers fight-back to secure a 29-20 victory.

Melbourne looked on track for a crushing win at AAMI Park, up 26-0 at halftime with second rower Felice Kaufusi bagging a double among their four tries.

But the second half was all Tigers, as they ran in four tries and came within a whisker of catching the Storm, with fullback James Tedesco brought down just short of the try-line with 12 minutes left on the clock.

Rather than resting their weary legs on the bench, the Storm looked to Cronk to slot a field goal to give them a match-winning margin, before Smith booted a late penalty.

“At halftime in the back of my mind I was thinking of trying to give Cameron and Cooper a rest but when it got to that, you’re always a lot more comfortable with those two guys out there and with all due respect, I think they probably proved the difference,” Bellamy said.

The statistics at the break made for awful reading for Wests Tigers coach Jason Taylor with Melbourne controlling 65 per cent of possession, completing 83 per cent of sets compared to the Tigers’ 58 and the home side clocking up 823 run metres compared to 335.

Taylor said their second half completion was 96 per cent — an impressive, yet frustrating figure, with the loss leaving the Tigers in 12th, while the Storm hold on to second on the ladder.

“The numbers were ridiculous in regards to weight of possession at halftime and then the way we turned that around was great,” Taylor said.

“It was a great show of control from the team but it was all really frustrating and disappointing because where was it in the first 40 minutes.

“We will leave the ground desperately disappointed about the fact that we didn’t win the game, because we showed we were good enough.”

Tedesco did his best to impress NSW Origin selectors as he sparked the revival with a 43rd minute try and halfback Luke Brooks was next in, quickly followed by centre Tim Simona.

Winger David Nofoaluma then capitalised on a defensive error by Melbourne centre Cheyse Blair to put the Tigers within a converted try, before Cronk’s field goal and the late penalty.

Bellamy said he is hopeful of getting fullback Cameron Munster (ankle) and five-eighth Blake Green (calf) back to face the Broncos in Brisbane on Friday night.

Giant forward Nelson Aso fa-Solomona is in doubt after suffering a knee injury but will undergo scans.