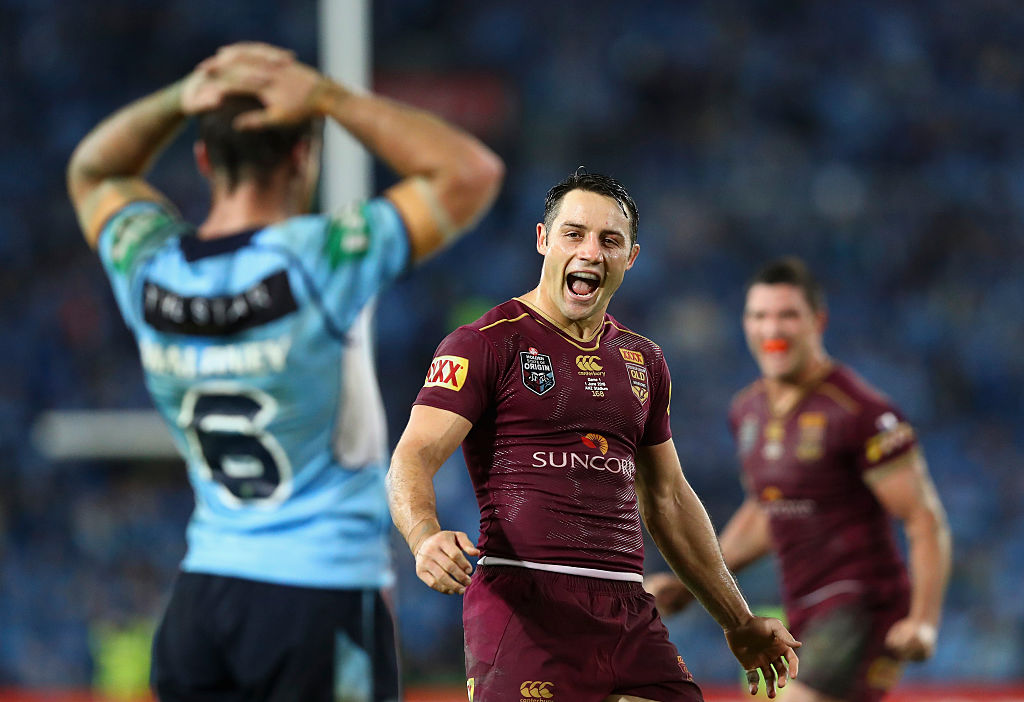 New South Wales are on a one-way track to their 10th State of Origin series defeat in 11 years after wasting a gilt-edged opportunity to take a 1-0 lead on their home patch.

With a sea of sky blue willing them on in the series opener at ANZ Stadium, the Blues had the tiring Maroons’ measure on several occasions and their giant pack got on top physically, but they were bereft of ideas on attack despite being afforded a welter of opportunities.

In a match that failed to reach any great heights, Queensland were far from their vintage best in subduing the hosts 6-4 – but they didn’t need to be.

• Walker Origin experiment fails for NSW
• Dylan Walker: from intensive care to State of Origin
• Why NSW have lost Origin I … already

It was as if NSW were spooked by seeing perennial match-winners Thurston, Cronk, Smith, Inglis and Boyd on the other side, letting the Origin greats pull the strings as they pleased as the clock wound down.

The first-half signs were positive for NSW.

Recalled five-eighth James Maloney laid on the opening try for Boyd Cordner, but one lapse in defensive concentration allowed Johnathan Thurston and Darius Boyd to combine to send Dane Gagai over just before halftime in what proved to be the final scoring play of the match in the 37th minute.

There were intermittent sparks in the second stanza – predominantly from a revived Robbie Farah, a rampaging David Klemmer and an offloading Andrew Fifita – but ultimately the Blues’ lack of creativity and adventure proved fatal.

The longer time wore on, the less NSW looked capable of changing the halftime scoreline as the composed Queensland defence rebuffed increasingly unthreatening waves of attack.

So where does the blame lie for the Blues’ flaccid effort?

It’s not an easy question to answer. Maloney justified his recall despite going missing in the latter stages, while fullback Matt Moylan overcame some early jitters to produce a gutsy and exciting debut.

The Blues’ defence was excellent across the board and the forwards unquestionably matched their experienced Maroons counterparts.

From an individual perspective, the only genuine disappointment was debutant halfback Adam Reynolds. Hyped as the key to a Blues turnaround, the South Sydney linchpin’s long-awaited maiden outing in a blue jumper was eerily reminiscent of the maligned Mitchell Pearce at his Origin worst.

Reynolds has arguably the best kicking game in the NRL, but his first clearing kick hit Gagai on the chest and he rarely found the turf thereafter, while he was a non-factor in a ball-playing capacity.

The Dylan Walker interchange experiment inevitably backfired. Injected in the 71st minute, the ‘utility’s’ only notable contribution was handing over possession while attempting to milk a penalty.

But the overwhelming contributor to the Blues’ agonising loss was their reluctance to take risks. It was always going to take a few special plays, a couple of pieces of individual inspiration, to put the iron-willed Maroons on their heels.

They never came – not even close.

Queensland deserve all the credit that comes their way after rehashing a time-worn script for yet another clinical, tough, professional victory.

Cooper Cronk was clearly hampered by his ankle injury but was nevertheless a steady influence. Thurston and skipper Cameron Smith – who set a new mark for Origin longevity in his 37th appearance – produced their customary classy touches.

Boyd was outstanding in the No.1 after 23 games on the wing, while Matt Gillett’s gritty display was rewarded with man-of-the-match honours, with pack-mate Matt Scott not far behind.

Unlike NSW, Queensland’s faultless structure allows newcomers to slot in seamlessly – Justin O’Neill and Corey Oates were superb on debut, while Gagai was just about best on ground in just his second Origin game.

Wade Graham and Bryce Cartwright would alleviate the Blues’ need for invention, but coach Laurie Daley already declared post-match he’ll stick with the same side after such a narrow loss.

The series now moves on to Brisbane – and Queensland haven’t surrendered the shield after a series-opening win in 11 years. They’ve only lost a series after winning Game 1 in Sydney once, in 1994.

Once again, NSW’s conservative approach has cost them any chance of regaining interstate supremacy.