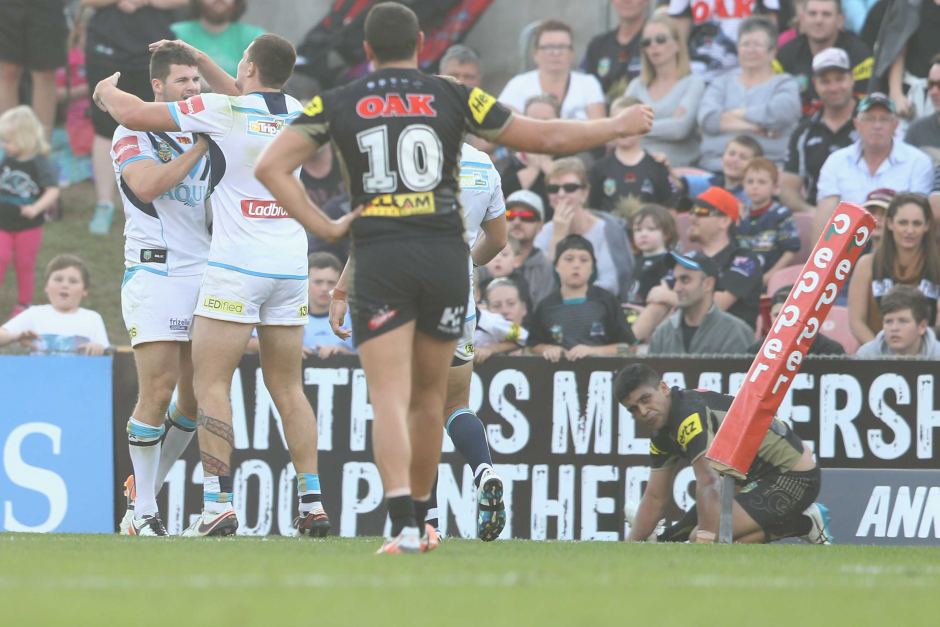 A Tyrone Peachey brainsnap in the 78th minute has gifted Gold Coast an unlikely 28-24 win at Pepper Stadium on Sunday.

With scores locked at 24-all, Peter Wallace was chased out of a field goal attempt when he threw a pass to Peachey, who dropped the ball then inexplicably failed to dive on it.

Titans halfback Ashley Taylor then picked it up and raced downfield, before Anthony Don acrobatically dived over in the corner one play later to steal a bizarre win.

It was yet another heartbreaking loss in a season of many for the Panthers, who may also have lost centre Peta Hiku with a season-ending injury and are now clinging onto their spot in the top eight.

The New Zealand international was stretchered off after an awkward tackle early in the second half, and could now join fellow Kiwi Dean Whare on the long-term casualty list at Penrith.

One day before NSW State of Origin coach Laurie Daley names his team for game one, none of Penrith’s five Blues hopefuls stood out in front of the crowd of 11,210.

Skipper Matt Moylan led a troupe of Panthers, including Josh Mansour, Bryce Cartwright, Trent Merrin and Peachey that have been in contention for Blues call-ups over the past month.

However the home side, who hadn’t trailed until Peachey’s fadeout, were left to rue yet another two points that got away.

Meanwhile, Josh Reynolds put in an impressive late bid for a NSW State of Origin berth in steering Canterbury to a 32-20 win over Sydney Roosters.

Reynolds scored a stunning individual try in the 34th minute to put the Bulldogs well and truly in control of the contest at 18-0.

The Blues hopeful enjoyed a good all-round game throughout including his kicking and in defence, as the Dogs claimed successive NRL wins for just the second time this season at ANZ Stadium on Sunday before 17,704 fans.

The Roosters need to win 10 of their last 13 games to make the finals.