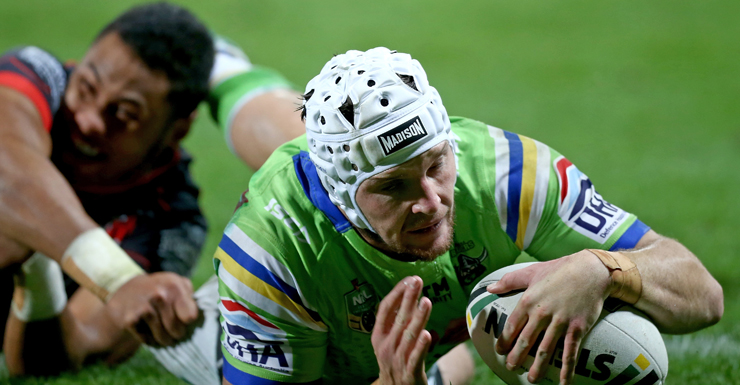 The Canberra Raiders have proved too strong for the New Zealand Warriors in the first NRL match in New Plymouth, racing away to a 38-12 win.

After two late losses in the past two rounds, the Raiders got back to winning ways in emphatic fashion, scoring six tries to two on Saturday night.

The match was the NRL’s first in Taranaki and much of the Warriors’ pre-match focus had been on Issac Luke’s return to his home province.

But the Raiders, whose energetic defence was a feature, put the dampener on the celebrations for the 36-Test Kiwi and former South Sydney hooker.

In what was a home fixture for the Auckland club, the Warriors paid for crucial errors and were on the wrong end of the penalty count.

The defeat leaves them languishing in the bottom quarter of the table ahead of a bye.

In a physical encounter, it was Blake Austin who got the Raiders on the board midway through the opening spell as he danced past three defenders.

The Warriors had a great chance to level, but Bodene Thompson knocked on as he pounced on a Shaun Johnson kick into the in-goal. When the Warriors conceded another penalty, Canberra pulled further ahead, Austin’s step creating the opening for a Joseph Leilua touchdown.

Cocker landed his third conversion to go with two early penalties and the visitors had raced to a 22-0 lead at halftime.

The Warriors finally opened their account early in the second half, a big run by Sam Lisone leading to a Johnson try.

But when David Fusitu’a dropped the ball on the first tackle, the Raiders took advantage, with Josh Papalii forcing his way over.  Josh Hodgson and Edrick Lee added further tries to blow out the scoreline before a late consolation for the Warriors through Blake Ayshford.

Newcastle has shown some signs of life at Campbelltown Stadium, but still fell to a fifth-straight loss.

The Knights scored their first points and even led in a game for the first time since late April before Wests Tigers ran away with a 20-12 win.

After being outscored 179-10 in the past four weeks, the Knights had a great chance to score their first win since round six, coincidentally also against the Tigers, when Trent Hodkinson converted Dane Gagai’s 49th-minute try for a 12-10 lead on Saturday.

But the Tigers struck back through winger Josh Addo-Carr and Luke Brooks to send the Knights back to the Hunter as losers once again.

Cronulla is on top of the NRL ladder for the first time since 2000 after beating Manly 20-12 for an eighth successive win.

The Sharks have not lost a game since losing their round-three clash with the Sea Eagles 22-12 way back on March 21.

Since then, they have looked almost unstoppable, although the 4-7 Sea Eagles gave them a fight on Saturday night.