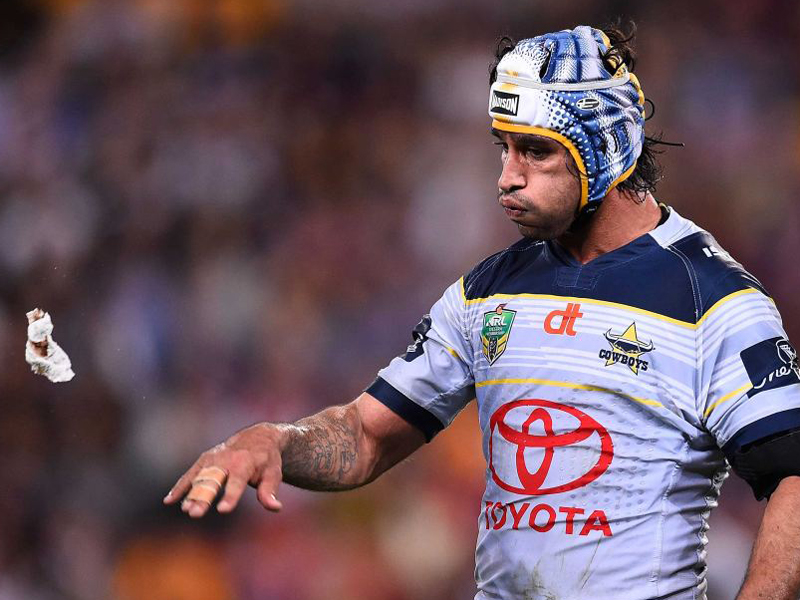 The Melbourne Storm have proved they are still among the NRL’s elite teams with a 15-14 win over the premiers, although Johnathan Thurston was left thoroughly unimpressed by the referees.

North Queensland stormed out of the gates, with Gavin Cooper capitalising after Storm winger Suliasi Vunivalu made a meal of catching a Thurston bomb in the fourth minute.

But the Storm climbed back on top to end the half with Tohu Harris and Kevin Proctor crossing, the latter doing so after Cowboys full-back Lachlan Coote emulated Vunivalu’s effort.

A 45th-minute penalty goal gave the Storm a 14-8 lead, but an incredibly slick piece of deceptive passing from Jake Granville saw Michael Morgan cross in the 54th minute, with Thurston’s conversion tying things up.

Thurston produced a nearly unbelievable ankle tap on a run-away Vunivalu, and Tohu Harris and Felise Kaufusi made spectacular defensive plays for the Storm, but it was their skipper who really came to the fore.

In the 71st minute, half-back Cooper Cronk spotted an opening on the set’s penultimate tackle, but was stopped by another try-saver, this time from Coote.

Recognising the team’s best field-goal kicker had been caught with the ball and there was no dummy half in place, five-eighth Blake Green made an excellent heads-up play to sprint to the play-the-ball. He got there just in time and fired a perfect pass to hooker Cameron Smith, who poked over the second one-pointer of his career.

The Cowboys’ search for a game winner or equaliser was not as neat as one would expect of a team of the Cowboys’ calibre, but their best chance came in the 75th minute.

After a damaging Jason Taumalolo charge, Thurston was spotting up directly in front 23 metres out, but he had to pull out of his attempt when Smith, as he had done all night, flew up and into his face.

Thurston knocked on as he tried to grubber through and he was clearly trying to contain his rage when asked after the game about the team’s chances.

He was certain Smith was offside, and replays certainly suggested Thurston’s Queensland and Australia team-mate had broken from second marker decidedly early.

“The referee’s just too scared to blow a penalty there,” Thurston told Fox Sports.

Coach Paul Green was a touch more diplomatic, but still suggested the referees missed a call.

“It’s always the case when field goals come into play,” he told reporters.

“I’m not going to blame the referees for that, but I think they could do a better job.”

Regardless, the Cowboys failed to find the equaliser and the Storm climbed to the outright NRL lead, but the Broncos quickly joined them on 16 competition points.

In the second game of the double header at Lang Park, Brisbane belted Manly 30-6 and sat on top of the ladder with the league’s best for-and-against midway through round 10.

Thurston: ‘The referee’s just too scared’