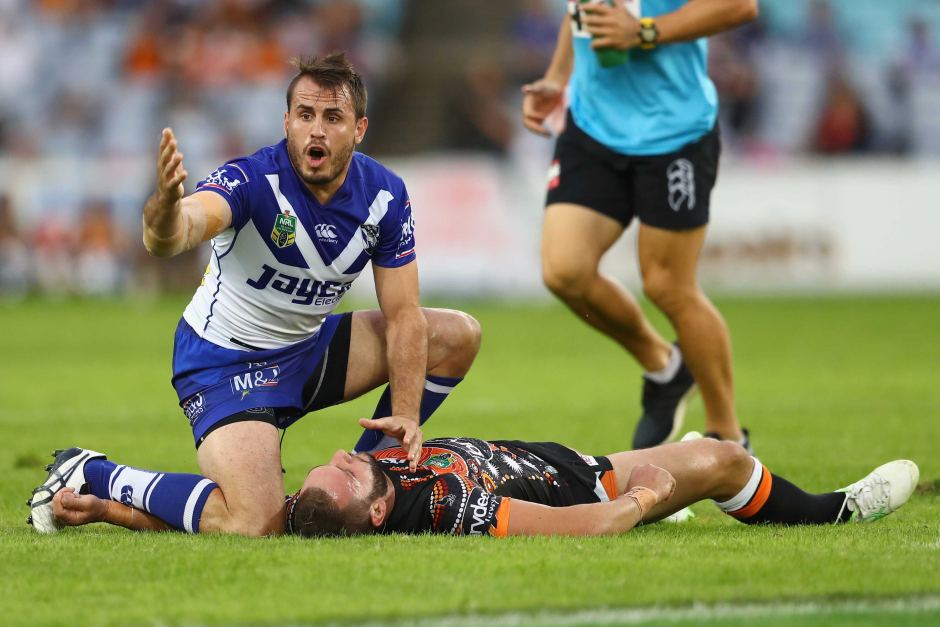 Josh Reynolds described Robbie Farah’s head injury as the scariest thing he has seen on a football field, as the Wests Tigers hooker’s hospitalisation further soured their 36-4 NRL loss to Canterbury.

The NSW No.9 is in doubt for the June 1 State of Origin series opener after being stretchered from the field with neck soreness after colliding with the hip of the Canterbury playmaker at ANZ Stadium on Sunday.

Tigers doctors said Farah’s hospitalisation was precautionary, and added he was in good spirits before being taken away, however he is no certainty to play before Origin I in Sydney on June 1.

• Thurston: ‘The referee’s just too scared’
• This is how pre-match entertainment is really done

It’s another blow for the Tigers veteran who missed the opening three rounds with a knee problem.

“Robbie’s okay, he had a bit of pain in his neck, which is why he’s gone to hospital but the doctor says it’s just precautionary,” Tigers coach Jason Taylor said.

“It was pretty clear it was serious and we were all concerned about him. We don’t know 100 per cent one way or another but the doctors are confident he’ll be fine.”

Farah was knocked unconscious after running into Reynolds’ hip as the Canterbury playmaker put in a kick in the 23rd minute.

The force of the impact was so great that Reynolds was walking around with an ice pack on his hip afterwards.

“It was very scary and you don’t want to see that happen to anyone,” Reynolds said.

“I’ve seen his lip moving a bit and it’s probably the scariest thing I’ve ever seen on the field.”

The loss – the Tigers’ seventh in their last eight games – reapplied pressure on Taylor.

The Sharks led 28-0 at half-time and ran in 11 tries to nil, handing the Knights their worst-ever loss on home soil, surpassing a 50-0 shut-out by Parramatta in 2005 amid Newcastle’s club-record 13-game losing streak.

It was Newcastle’s second-worst loss anywhere, behind only a 71-6 thrashing from Brisbane at Suncorp Stadium in 2007, and displacing the 53-0 loss to the Broncos at Suncorp on April 16 this year.

On a day of records, the Sharks equalled their biggest-ever winning margin, matching a 68-6 victory over Manly in 2005.

It was also Cronulla’s biggest win over Newcastle, going past the 64-14 hammering they handed out at Cronulla in 2002.

The Sharks moved to second place on the ladder, behind leaders Brisbane only on percentage and also tied on 16 points with third-placed Melbourne.