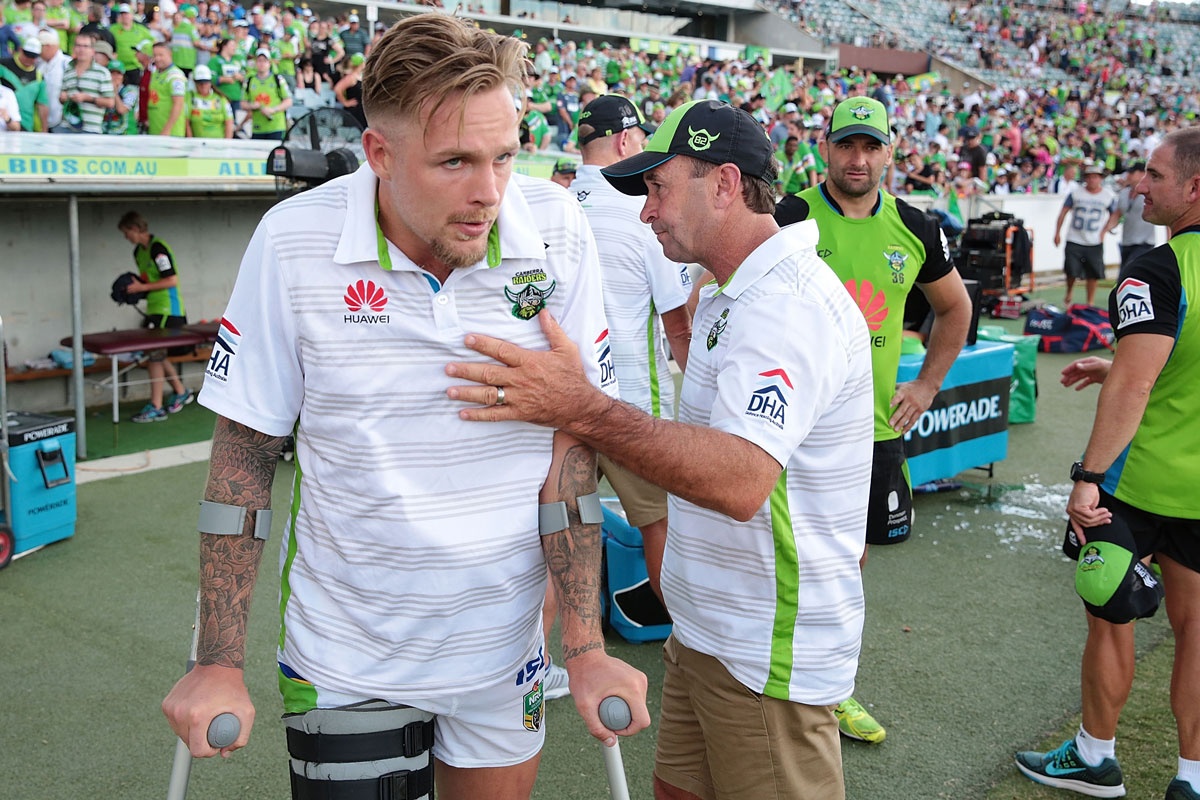 A season-opening win has come at a huge cost for Canberra, with new star halves pairing Blake Austin and Aidan Sezer facing stints on the sideline with serious injuries.

Austin suffered medial ligament damage to his right knee in the 30-22 NRL victory over Penrith at GIO Stadium on Saturday, while Sezer had a possible broken cheekbone or eyesocket yet still scored two tries on debut.

The Panthers also lost hooker James Segeyaro to a broken forearm in his 100th game.

The injuries soured a tight and often ugly affair in which debutants from both sides sizzled in searing heat.

The temperature nudged 35 degrees, prompting the Panthers to order an extra 100kg of ice just before kick-off to help keep their players cool.

Dally M five-eighth of the year Austin had been named on the bench to ease his way back from major shoulder surgery last September but was forced to start after Sam Williams succumbed to a virus.

Austin showed no signs of concern in his first outing of the year, scoring a try, assisting in another and kicking a monster 70m-plus drop-put before being sidelined.

Sezer made up for his absence, pushing through immense pain to score a double in game one for the Raiders and help fight their way out of a tight game.

“This time last year we (would’ve) lost that one,” coach Ricky Stuart said.

“The addition of our new players Aidan, Jeff (Lima) and Elliot (Whitehead), and the education we got last year in close games … obviously helped.

“But it could’ve gone either way today – Penrith were tough, we were tough.”

Edrick Lee opened the scoring for the Raiders in the 10th minute, with tough man Shaun Fensom sealing it with a try in the dying seconds after making 41 tackles and running 164m.

Panthers recruits Trent Merrin and Peta Hiku both laid on tries in their first NRL games for their new club, while Josh Mansour scored a crucial four-pointer in the second half.

“In the end we just killed ourselves,” coach Anthony Griffin said.

“It was a really good physical effort by us, but we were pretty done by that second half.

“We came out and found the first try, but from then on we hardly completed a string of possession.

“It’s very hard to win at this level with that completion.”

Stuart, who jumped for joy at the full-time siren, labelled Canberra’s fans the toughest in the league after more than 11,000 turned out for the clash.

“If they’re not sitting in 35 degree heat, they’re sitting in minus two,” he said.

The Raiders host Sydney Roosters next week, while the Panthers face Canterbury at Pepper Stadium.