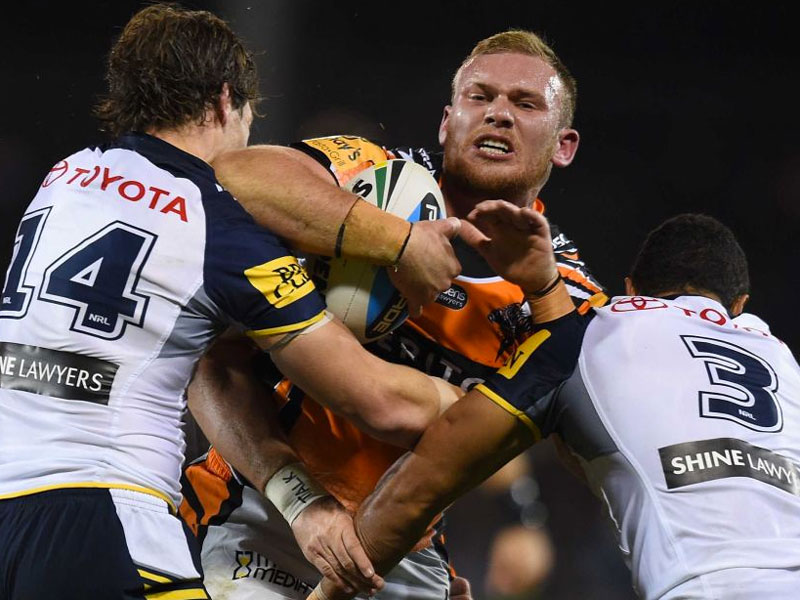 Matthew Lodge has been ordered to stay away from his alleged victims and will reappear in court in New York in February.

After being bailed from the infamous Rikers Island prison, the former Wests Tigers NRL player has surrendered his passport and has been ordered to appear in court on February 5, where he could face up to 25 years in jail.

The 20-year-old allegedly went on a rampage in a quiet residential section of Manhattan’s Upper West Side in the early hours of last Friday morning [local time], stalking two women, punching a man who tried to intervene, locking himself in the man’s apartment, and terrorising his family.

Judge Gilbert Hong imposed four orders of protection for those alleged victims against Lodge, who was instructed not to try and contact them.

As the women tried to flee, he allegedly told them “this is the night you die”.

Dekeyser and Martin looked for help by pushing multiple apartment buzzers and were given entry by Joseph Cartwright, who confronted Lodge in the building.

Lodge allegedly punched the man, then locked himself in Cartwright’s apartment where, according to the complaint, he “caused significant property damage to the apartment and informant’s belongings and terrorised (the) informant’s family”.

According to the New York Post, police found Lodge hiding in a closet. He allegedly threw a bottle of wine at officers.

“Matthew has agreed to stay in the United States until his case is resolved. We are confident that when all of the facts and circumstances are known, the District Attorney’s office will see the same good and decent person that his family and friends know so well.”

The Wests Tigers have torn up Lodge’s contract as a result of the incident, the latest of several incidents he has been involved in.

Lodge had not played since August when the club stood him down following assault charges and a provisional apprehended domestic violence order.

He was sanctioned last year for writing an obscene word on his wristband during an under 20s State of Origin game and had been with Cronulla’s Fifita brothers in July when they got into an altercation with a referee at a junior game.

He was also fined for an altercation outside a Kings Cross nightclub in January.