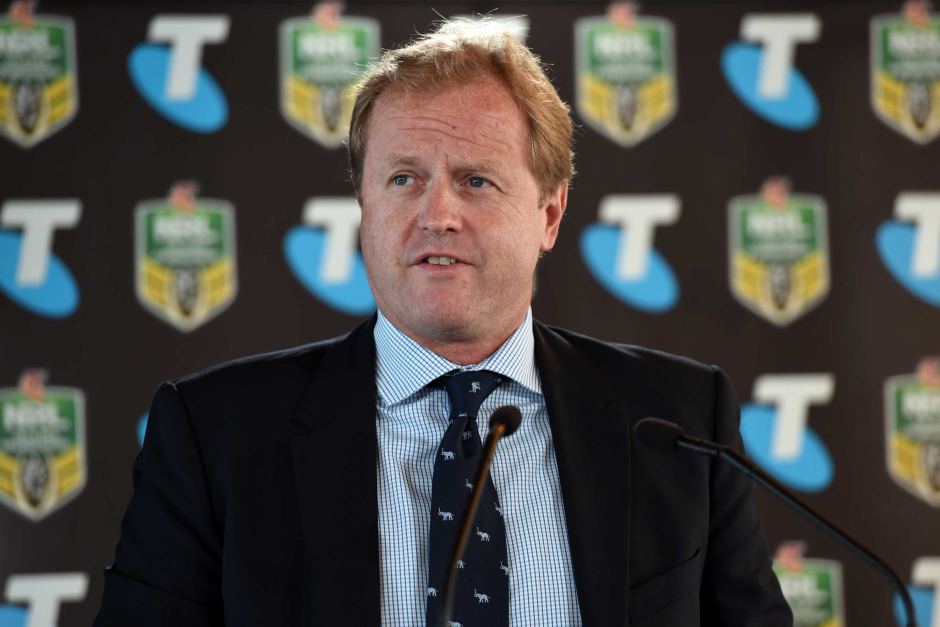 Smith said on Tuesday he would leave the job on November 30.

ARLC Commission chairman John Grant takes over as interim CEO while a worldwide search is conducted for a successor.

Smith has been a polarising figure in rugby league since taking over from longtime CEO David Gallop ahead of the 2013 season.

As a former banker, Welsh-born Smith has been credited with improving rugby league’s finances but he was constantly at odds with the clubs over the direction the game was taking and how the NRL’s revenue was divided up.

His exit was also being linked to a breakdown in negotiations over the NRL’s lucrative broadcast rights.

Smith was keen to talk up the positives of his reign on Tuesday.

“I’ve been a change agent for most of my career and the time has come for me to handover to a new leader to consolidate these gains and I finish with pride in the game’s achievements,” Smith said in a statement.

“Together with the ARLC, the 16 NRL Clubs and the State Leagues we have made significant progress in modernising Rugby League and, having assessed our progress and year-end position, it is clear we now have the foundations in place for long-term success.”

In August, Smith came under fire for his handling of broadcast negotiations when he signed a new free-to-air TV deal with Channel Nine before an agreement was reached over the pay-TV rights.

He trumpeted a $925 million five-year free-to-air-broadcast deal with Channel Nine for seasons 2018-2022 that increased the game’s presence on the network to five games a week.

However, that deal was soon shadowed by the AFL’s reported $1.3 billion deal with its free-to-air and Pay TV broadcast partners as News Corp chairman Rupert Murdoch showed his displeasure about Fox Sports being sidelined by the NRL’s deal with Nine.

Smith had declared one of his major aims in office was to conclude dealings on the new TV broadcast arrangement, but he leaves with the pay TV and digital rights for seasons 2018-2022 still to be negotiated to a conclusion.

He insisted his legacy was strong.

“We have secured the biggest free-to-air broadcast deal in our history, $1.6 billion for investment in Rugby League stadiums and a financial platform that includes a sustainability fund of $50m and a surplus of $100m that is progressively being invested back into the game, and a 48 per cent increase in non-broadcast revenue,” said Smith.

“We are consistently enjoying record-breaking Origin and Finals Series and we have grown significantly with more than 300,000 fans converted into club members; new pathways for elite, recreational and female players; the biggest digital profile and reach of any sport in Australia; and we’ve introduced some new products such as the Auckland Nines and World Cup Challenge.

“Importantly we’ve also set new, higher standards when it comes to our brand, reputation and integrity which will solidify our growth.

“The game is now safer, more in line with community expectations and just as exciting for fans,” he said.

Smith was also criticised for his lack of accessibility to the media.

He will perhaps best be remembered by many league fans for bringing in the `one punch and you are off’ edict following an incident between Paul Gallen and Nate Myles during State of Origin in 2013.

It was a ruling aimed at making the game more family friendly and eliminated the biff from rugby league overnight.