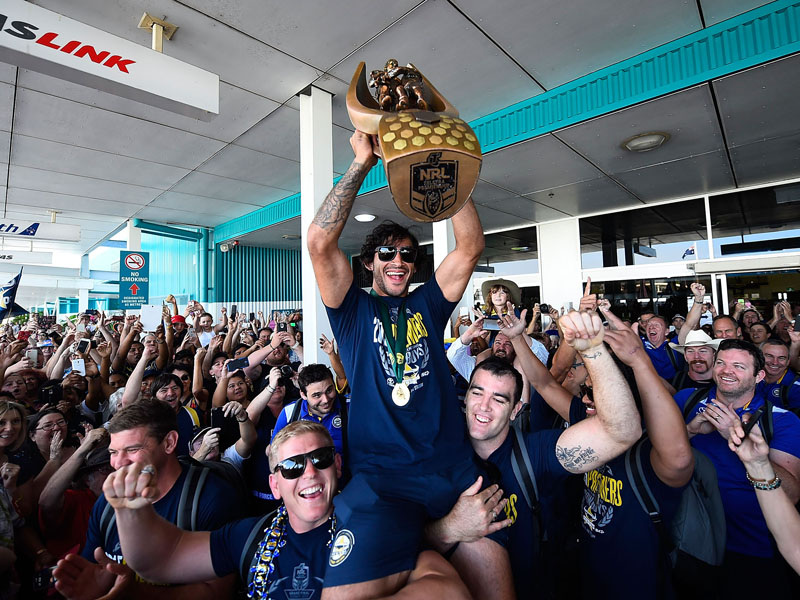 The Cowboys have been given a heroes’ welcome by more than 1000 fans at Townsville Airport, following the North Queensland team’s thrilling NRL grand final win against the Brisbane Broncos.

The greatest cheers were reserved for team co-captains Johnathan Thurston and Matt Scott, who held the premiership trophy aloft as they walked through the jubilant crowd.

It was Thurston who kicked the winning field goal in the 83rd minute of the game in Sydney, sending all of North Queensland into a celebration frenzy.

Scott spoke briefly to the media before the team entered the airport concourse, saying the victory had yet to fully sink in.

“We’ll have to get together as a group and spend a bit of time reflecting on the year and the performance last night. I’m sure after we do that it’ll sink in fully,” he said.

Everyone in the team had been keen to arrive home to celebrate the victory, he said.

“We spoke about what it was going to be like if we did win and we saw the send-off we got and how crazy that was, so I just said to them ‘times that by about 1,000’.

“A few of the boys were saying it’s almost nervous, like we were going to a game.

“It’s just such a great feeling to be able to bring back the trophy for the north.

“It’s just extremely satisfying, the fans who are so loyal to us up here go through all the highs and lows we do.

“It really is theirs as much as it is ours.”

The heavy turnout of fans at Townsville Airport prompted authorities to place Cowboys fans behind a cordoned off area along the airport concourse to allow room for the arriving players and other air passengers.

It is the club’s first premiership after entering the NRL in 1995.

This is HALF the crowd and they’re still pouring in. @nthqldcowboys about 10 away #townsville #nrlpremiers pic.twitter.com/8Ag6G0i2v7 — Karina Carvalho (@Karina_Carv) October 5, 2015

It is a victory that has renewed pressure on the Federal Government to help fund a new stadium for the team, with Thurston himself making a plea after the match.

The team left the airport to attend a civic reception at the Cowboys’ home stadium, where thousands of fans greeted the players.

As they departed Sydney, Thurston and his Cowboys teammates, holding the premiership trophy, stopped for pictures with fans.

Liz Hayes, who celebrated late after the win, said it meant a great deal to the region.

“It was so good, great for the town,” she said. “It’s not just Townsville itself, we’ve got guys coming from Mt Isa, Cairns, Mackay.

“Everyone comes to visit when it comes to home games.

“Whoever didn’t get to go to Sydney, I guarantee they will be at the stadium.”

Ahead of his arrival in Townsville, Cowboys player Gavin Cooper said he was expecting a big turn out.

“It’s going to be pretty crazy,” he said.

“[We’re] going to have a reception this afternoon at the stadium which will go to a bit of the next level.

“Not sure how many people are going to turn out but it’s been a pretty crazy week, been a great year.”

Meanwhile, Prime Minister Malcolm Turnbull will meet with Townsville’s community leaders next week to discuss plans for a new stadium.

The Broncos landed in Brisbane about midday, with about 100 fans waiting at the airport.

Amongst the crowd was Graham, who drove back from Sydney for the homecoming.

A public reception will be held at their headquarters in Red Hill this afternoon.

Broncos player Ben Hunt did not have a case of sour grapes over losing in over-time.

“It is just the way the game is, that’s the rule,” he said at the airport in Brisbane.

“They were good enough to win on the night,

“Couldn’t have happened to a better bloke than Thurston, so congratulations to them.

“Life goes on. We are all feeling a bit down but we will get back up for next year.”

Fellow Broncos player Corey Parker said it had been a long journey.

“Although we didn’t get the trophy last night, I’m pretty sure we didn’t let any of our supporters down or our members down,” he said.

“It’s hard to get into grand finals but as you saw last night, they’re even harder to win.”