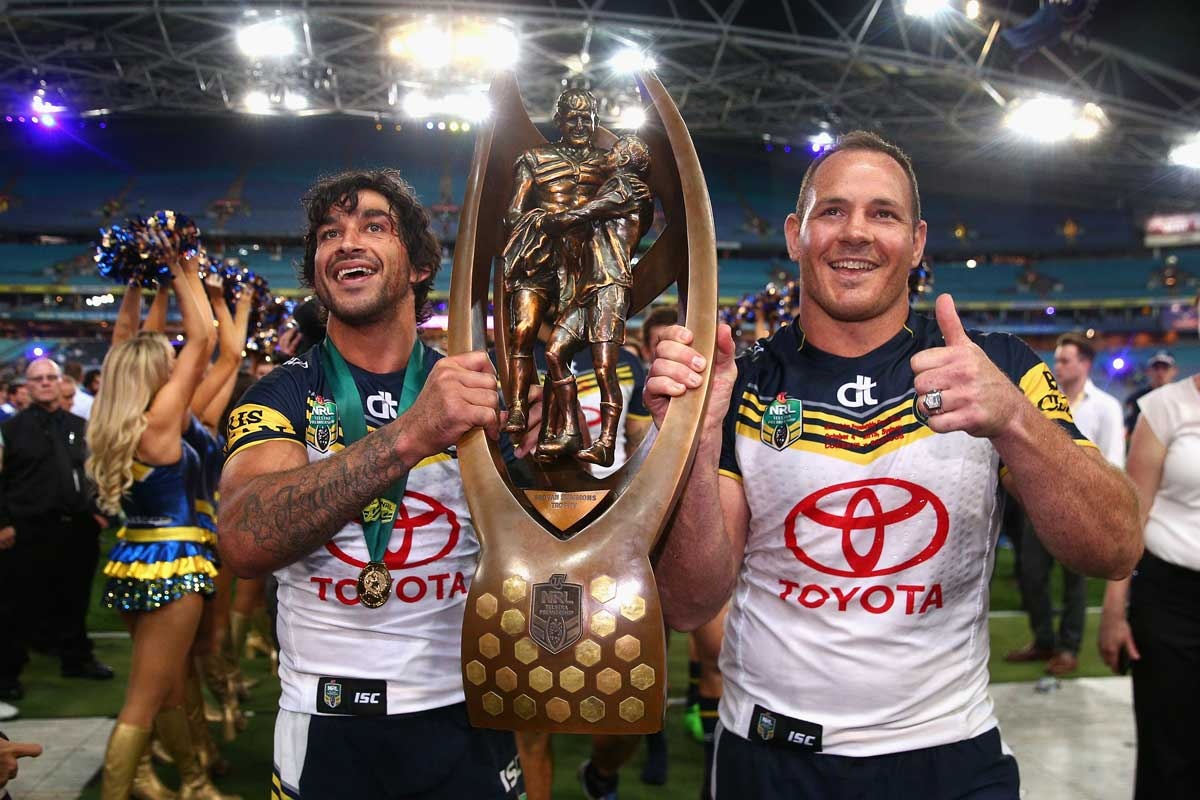 In one of the most dramatic finishes to a grand final in history, a Johnathan Thurston golden-point field goal has given the North Queensland Cowboys their first NRL premiership.

Trailing the Brisbane Broncos by 16-12 with less than a minute remaining, Kyle Feldt scored a try in the corner for the Cowboys to tie it up.

Thurston heartbreakingly missed the conversion attempt, hitting the post, but after Ben Hunt knocked on the kick-off for extra-time, Thurston slotted the field goal to give his side their first premiership.

“I love these boys, they fought so hard,” Thurston said.

Thurston was awarded the Clive Churchill Medal for the best player in the grand final.

After Brisbane defended stoutly for the final 20 minutes of the match, repelling Cowboys defensive raids time and time again, Feldt scored after the siren from a brilliant one-handed offload from Michael Morgan.

Thurston waited several minutes before he lined up what would have been a match-winning conversion, only for it to hit the right hand post as it curved late.

But when he was handed the opportunity a second time, he didn’t miss in the second minute of extra time.

It was a tough way for the Broncos to lose, after they had spent so much time defending their own line.

After the Broncos led 14-12 at halftime, the sole second-half points until after the siren were a 43rd-minute penalty goal to Jordan Kahu.

Morgan was held up over the line early in the second half, before Kane Linnett dropped the ball with the line wide open in the 61st minute. Three minutes later, Morgan was penalised for a double movement.

But that all mattered little after Thurston’s heroics.

“This means so much to everyone up there,” Cowboys coach Paul Green said.

“We’ve been trying for 20 years to take a premiership up there and we have finally done it.

“The ice that Thurston showed there was incredible.”

Corey Parker opened proceedings in the fifth minute with a penalty goal.

The Broncos then set the game alight from the re-start. Adam Blair offloaded to Anthony Milford who found Jack Reed in space, the England international passed to Corey Oates who raced 50m to complete the 95m movement and open up an 8-0 lead for the Broncos.

But the Cowboys hit back immediately. A Matt Gillett dropped ball gave them good field position and, from the ensuing scrum, Jake Granville dummied his way through the Broncos’ line before putting Justin O’Neill over.

North Queensland enjoyed the better of field position early, with 65 per cent of the game being played at Brisbane’s end. That resulted in a Cowboys lead when Granville put James Tamou over from close range, as Sam Thaiday slipped off a tackle.

The first half then turned on a dropped ball by Thurston, 35m out from his own line. Brisbane immediately counter-attacked and Reed forced his way over in the 34th minute. Kahu’s conversion put the Broncos ahead 14-12, the halftime score.

In the clutch, Thurston finally ticked off the only thing he hadn’t achieved in the game of rugby league. In the process, he sent out retiring Brisbane captain Justin Hodges a loser and handed Broncos coach Wayne Bennett his first loss in a decider in eight times as a sole head coach.

“It was a tough game to lose, but we have had a great year,” Broncos back-rower Sam Thaiday said.