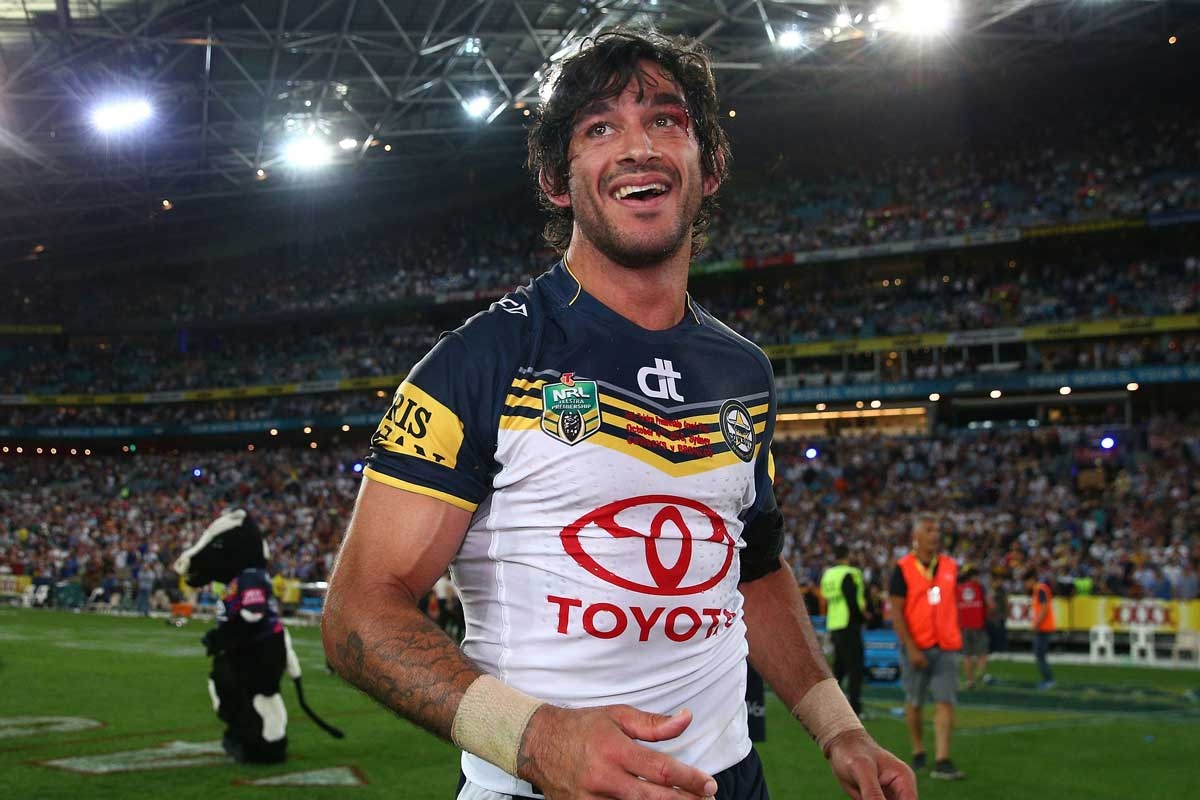 The victory came via a golden-point field goal in arguably the most dramatic grand final in history.

Trailing 16-12 inside the final minute, the Cowboys’ heartbreaking post-season exits of the last three years were washed away by a mind-blowing try on the siren that sent the game into extra-time.

Then the mercurial co-captain – whose sideline conversion attempt to win the game cannoned off the upright – slotted the most important field goal in the code’s 108 seasons.

On ‘big brother’ Brisbane’s side of the fence, heartbreak.

The Broncos set up a half-time lead with some sizzling enterprise with the ball in hand and defended their line so bravely throughout the second stanza.

But after giving up a try on fulltime, Ben Hunt agonisingly dropped the ball from the kick-off of golden point, and the Broncos collapsed on the turf exhausted and devastated as Thurston inevitably clinched victory.

The Queensland rivals fashioned a thrilling first half packed with attacking highlights.

The Broncos bolted to an 8-0 lead in a flash.

Corey Parker drilled a 40-metre penalty goal to start the scoring, before Adam Blair, Anthony Milford and Jack Reed combined to send 20-year-old winger Corey Oates away for an unforgettable 90-metre try in the seventh minute.

Rather than wilt, the Cowboys responded immediately following a Brisbane error. Jake Granville broke off the back of a scrum and offloaded for Justin O’Neill to dive over next to the posts.

The Cowboys withstood a couple of dangerous attacking raids as the Broncos targeted their right edge again, and livewire hooker Granville produced another decisive play to put them in front for the first time, holding up a superb flat pass for James Tamou to crash over from close range.

Brisbane seized an opportunity to level from the unlikeliest of sources – a Thurston error 30 metres out from the Cowboys’ line.

Matt Gillett picked up the loose ball and shrugged off a pair of would-be tacklers before offloading for Reed to score.

Parker’s successful conversion edged the Broncos out to a 14-12 halftime lead.

The teams had produced the highest-scoring first half in grand final history, but the second 40 featured a long scoreboard stalemate – though it was no less engrossing.

A Jordan Kahu penalty goal pushed the Broncos out to a four-point lead, while their steadfast goal-line defence seemed set to get them home as Wayne Bennett’s charges played the percentages and kicked for the sidelines.

Thurston took charge and laid on a gilt-edged chance for Kane Linnett at the hour mark, but the ball bounced off the centre’s chest.

Minutes later, Lachlan Coote was cut down in a try-saver by Gillett and the Cowboys’ fullback was pinged for a double-movement. The Broncos’ defence was heroic.

With time ticking away and the Cowboys appearing fatigued and out of ideas, the Broncos had one hand on the trophy.

But the front-runners could rebuff Thurston no more. Skirting the defence on the last tackle in the dying seconds, he linked with Michael Morgan.

The five-eighth sealed a place in grand final folklore by splitting the Broncos’ cover defenders and popping a magical flick pass for Kyle Feldt to dot down in the corner on the bell.

Thurston took an eternity to line up the conversion as the rugby league world held its collective breath.

The ball thudded into the woodwork, dictating that JT needed to delve once more into his incomparable bag of tricks.

After the hapless Hunt’s tragic error, the Broncos desperately shut down the Cowboys’ initial attempts to set for a field goal but Thurston would not be denied on the sixth play.

He drove a one-pointer down the middle to set off wild celebrations.

Thurston’s fairytale clutch moment was capped off with the Clive Churchill Medal – virtually the only gong he had not yet received in a career that now stands as perhaps the best ever.

Any concerns that the absence of a Sydney team for just second time in grand final history would dampen interest were ultimately unfounded.

The result aside, the all-Queensland grand final ranks alongside any decider. Both sides were valiant throughout.

Feldt’s try at the death is destined to go down with ‘Chicka’ Ferguson’s hot-stepping try of 1989 and Darren Albert’s match-winner in 1997.

The 2015 grand final now joins those two as the finest we’ve ever seen.

It was the first golden-point decider, just the third to go into extra-time and the fourth to be decided by a solitary point – a grand final for the ages.