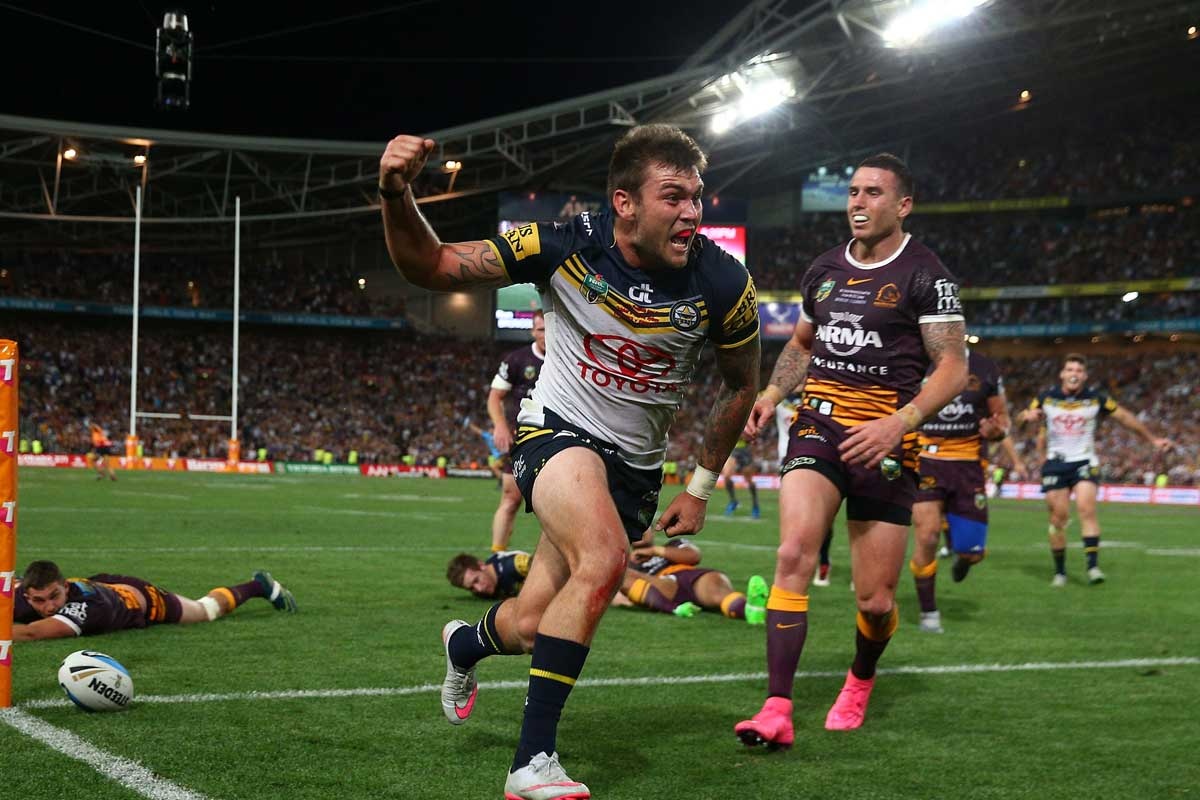 Rarely has a grand final delivered so many unforgettable flashpoint moments.

Here’s the five that contributed most to the epic contest that was the 2015 NRL decider, won 17-16 by North Queensland over Brisbane in golden point – a match that will take over as the standard-bearer in the pantheon of rugby league grand finals.

A couple of mistakes proved particularly costly during the first half. Straight after Corey Oates’ classic long-range try, Broncos backrower Matt Gillett coughed up possession in front of his posts and the Cowboys struck back directly from the scrum win.

The Cowboys looked set to go into the break with a four-point lead, but Johnathan Thurston lost the ball 30 metres out from his line in the 35th minute.

Ironically, it was Gillett that made him pay, collecting the loose ball and laying on a crucial try for Jack Reed.

Quicksilver hooker Jake Granville lacked his customary impact through the finals, but he chalked up two brilliant try assists in the opening 25 minutes.

The diminutive No.9 scooted off the back of a scrum to set Justin O’Neill up for the Cowboys’ first, before sending James Tamou over with a superb dummy-half pass.

Granville’s playmaking influence was emphasised when his opposite, Broncos workhorse Andrew McCullough, bombed a try by holding onto the ball when Corey Parker would have been in under the posts.

Brisbane’s goal-line defence through the middle stages of the second half was titanic, and Kane Linnett appeared set to go down in grand final infamy when he dropped the ball after Thurston had created a gilt-edged scoring chance in the 60th minute.

The pinpoint cut-out pass ricocheted off the centre’s chest with the line wide open, while Lachlan Coote was penalised for a double-movement soon afterwards following a scything Gillett tackle.

North Queensland had run out of time and ideas, with even the peerless Thurston struggling to generate anything constructive in the dying minutes.

On the last tackle of the Cowboys’ final set – with only 10 seconds left – Thurston was bustled by the Broncos’ defence yet again, but he managed to evade their clutches, back-pedal and find his halves partner Michael Morgan.

The five-eighth put the hammer down and split the cover defence, before producing a stunning flick pass for Kyle Feldt to score in the corner and level the scores as the siren sounded.

Morgan’s magical assist is destined to take on the same mythical status Andrew Johns’ blindside dart to set up Darren Albert’s 1997 match-winner has been afforded, while Feldt – in just his 22nd NRL appearance – has become a perpetual grand final hero.

The scene was set for a fairytale, but Thurston’s sideline conversion attempt thudded off the upright in a moment of almost inconceivable drama.

The Cowboys’ emotional rollercoaster got back on the rails when Brisbane No.7 Ben Hunt excruciatingly dropped the ball from the kick-off in golden point.

The Broncos desperately raced up to foil the Cowobys’ initial endeavours to set for a one-pointer, but the irresistible sense of destiny took over and Thurston nailed the field goal to clinch a euphoric triumph. The moments that mattered in the NRL grand final