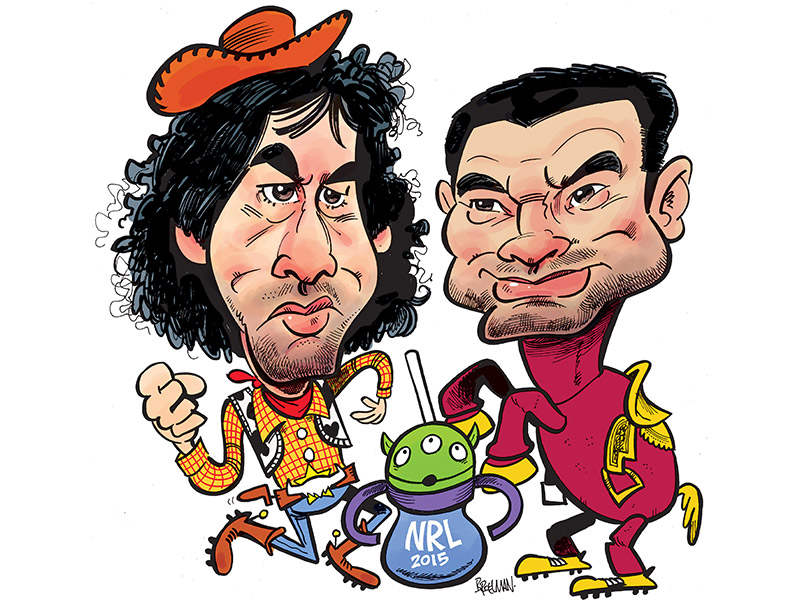 The NRL’s all-Queensland grand final is shaping up as one of the tightest and most intriguing of the modern era.

Here’s where Sunday’s big game will be won and lost when the match kicks off at 7.15pm this Sunday.

Premierships are traditionally built on having the best defence in the competition.

The side that is the most ruthless without the ball almost exclusively wins grand finals.

The Broncos crafted the third-best defensive record during the regular season, and while they give up plenty of metres, their goal-line efforts this year have been spectacular – a common trait in Bennett-coached teams.

They nullified Johnathan Thurston to grind down the Cowboys three weeks ago and were near-perfect – besides Jack Reed’s twin misses on Blake Ferguson – against the star-studded Roosters in the preliminary final.

The Cowboys rated a respectable fifth in the NRL’s defensive stakes in 2015, and there are no individual weak links. But collectively, they have been vulnerable in patches – particularly early in games.

The fatigue of playing four straight playoff matches, whereas the Broncos enjoyed a week off, may also count against the Cowboys at the back-end.

North Queensland made an art form of hauling in double-figure deficits throughout 2015; they were slow out of the blocks again in the preliminary final, but a below-par Melbourne side let them get away with it.

Their opponents on Sunday won’t be so accommodating.

Brisbane has been an excellent front-runner and will be almost impossible to mow down. The Cowboys have to switch on from the outset.

Battle of the halves

All eyes will be on Thurston and his No.7 opponent Ben Hunt – but their five-eighth lieutenants, Michael Morgan and Anthony Milford, are equally vital to the outcome of the decider.

Unsurprisingly, the quartet occupies the first four lines of betting in the Clive Churchill Medal market.

Thurston’s tenacity, peerless ability to unlock defences and vast big-game experience render him the most influential player on the field.

The instinctive Hunt’s option-taking is the biggest improvement to his game, while his penchant for breaking the line and sniffing out a try is almost Langer-like.

Milford is arguably the NRL’s most elusive ball-runner a fine adlib playmaker, whereas Morgan uses speed and strength to beat his man.

Morgan holds a slight edge in the ball-playing department and is so dangerous inside the 20-metre zone, while Milford can hurt you from anywhere on the paddock.

Morgan has scored 15 tries this year (including consecutive doubles in the past fortnight), Milford has notched 13 and Hunt 12; Thurston is well back on four tries, but the Dally M medallist has racked up an astonishing 33 assists.

Cowboys bookends Matt Scott and James Tamou are guaranteed to chalk up massive numbers and leave nothing in the tank, while Broncos counterparts Adam Blair and Sam Thaiday are the types to reel off a big hit or produce an inspirational run to turn the tide of a match.

All four are Test veterans, but Scott and Tamou have never played in a grand final – Blair and Thaiday boast four appearances between them. Blair and Scott have been the form forwards of the finals and shape as Churchill Medal smokies.

Whichever duo can get their team on front foot will create a platform for tackle-busting, offloading locks Jason Taumololo and Corey Parker to break the game wide open.

The magnitude of the fullback clash between Darius Boyd and Lachlan Coote has been somewhat lost amidst the titanic showdown in the halves, but the no.1s could prove the difference.

But Boyd, a representative stalwart, two-time grand final-winner and Churchill medallist, has the big-game chops; Coote is entering just the sixth finals match of his eight-season career.

Both custodians have enjoyed well-deserved renaissances in 2015 and are set for a fascinating duel.

The indications are that this grand final will go down to the wire – and in Jonathan Thurston, the Cowboys have perhaps the greatest clutch player to have pulled on a boot.

JT’s knack for potting a pressure field goal, a sideline conversion or engineering a late try is unparalleled.

Hunt has proven his capacity to pull off a match-winning try or set one up in the dying seconds on multiple occasions this year, however, while Anthony Milford is the Broncos’ go-to field goal exponent.

If this goes into golden point, we are set for the most exhilarating shootout in grand final history. All you need to know about the NRL grand final