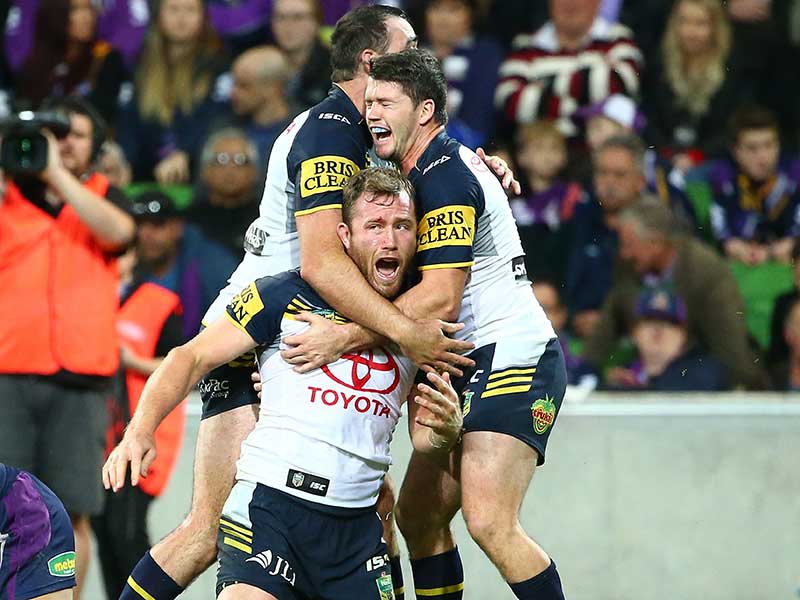 The Cowboys led 16-12 at halftime and two tries to Morgan in three minutes midway through the second half paved the way to victory for the visitors at AAMI Park on Saturday night, before a record Storm crowd of 29,315.

North Queensland will now meet Brisbane in next Sunday’s grand final at ANZ Stadium in Sydney.

Thurston was taken off by Cowboys coach Paul Green with 10 minutes to go, as he battles an ongoing groin injury. But Thurston downplayed the complaint.

“It’s just a little bit of a cork to the groin, nothing too serious,” he told broadcaster the Nine Network.

“It’s good to see two Queensland sides there at the big dance. They (Brisbane) were impressive last night (in beating Sydney Roosters), we will have to play our best football to beat them.”

Morgan streeted away down the short side in the 54th minute to put the Cowboys ahead 20-12, following an incident in which Melbourne winger Marika Koroibete was sin binned for punching Kyle Feldt.

With Koroibete in the bin, Morgan scored minutes later when Gavin Cooper picked up a Ben Hannant chargedown and dished off the Steeden to the Queensland utility who carried 50m to score.

Cooper then scored from a Thurston short ball with 10 minutes to go to put the result beyond doubt.

The Cowboys were simply too good for the Storm, dominating them up front on the back of James Tamou’s and Matt Scott’s continuous surges forward with the ball, allowing Thurston and Morgan to take control of the fixture.

A Cooper try just before the break put Melbourne on the back foot and they lost their way in the second half, illustrated by a number of disorganised last tackle options.

However, the home side did start well.

Cronk drew first blood for the Storm when he brushed past Thurston and Lachlan Coote in the 10th minute from close to the Cowboys’ try line.

But Thurston hit back four minutes later when he grubbered for O’Neil’s first try, but missed the gettable conversion.

Thurston then put O’Neill over seven minutes later as the Cowboys hit the lead for the first time in the match.

In an entertaining opening half, Melbourne then surged ahead when Tohu Harris crashed over on the Storm right side. Smith’s second conversion put his side ahead 12-10.

But a Matt Duffie clanger handed the visitors a halftime lead. The Storm left winger’s air swing at a Thurston cross-kick gifted Gavin Cooper a 40th minute put-down. Thurston’s conversion put the Cowboys ahead 16-12 at the break.

“It was a good performance, we were consistent with our effort through the whole game,” Green said.

“We knew they would take us on through the middle and I thought our boys stood up really well. They have the best dummy half in the world there and if you make an error he is going to make you pay and I thought we were really good on him in particular.”

“This is what you set out to do every October, I am really happy for the boys and the club it is going to be an enjoyable week.

“We needed to be better than what we were last week and I thought the boys were.”

Coach Craig Bellamy said the Storm were off their game.

“We just lacked that aggression and drive we had against the Roosters. I don’t know where it went,” he said.

Bellamy described Koroibete’s actions as “lacked a bit of discipline”.

“A lot of player don’t like getting tapped on the head and he reacted to that,” Bellamy said.

“But I don’t think it was going to make a whole lot of difference to the game.”