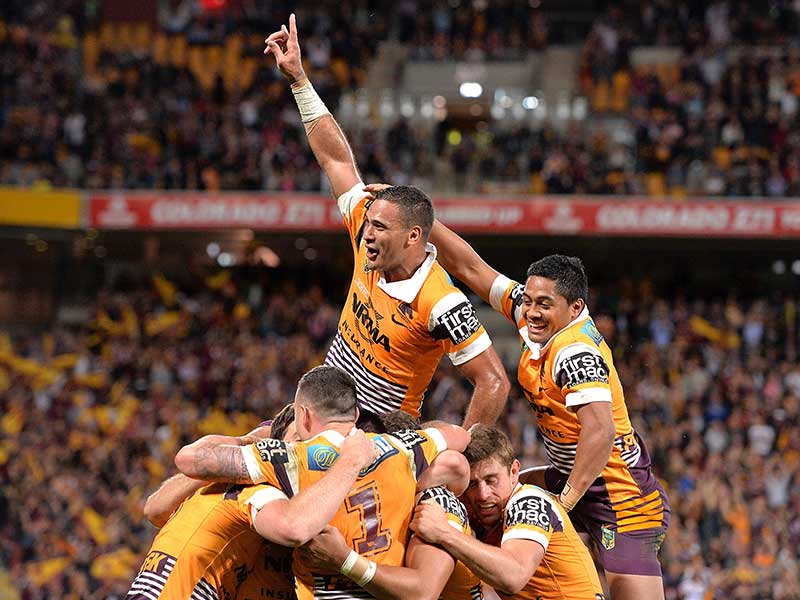 Retiring Brisbane skipper Justin Hodges faces a nervous wait ahead of the NRL season decider after being placed on report in the Broncos’ stunning 31-12 preliminary final win on Friday night over the Sydney Roosters at a sold-out Suncorp Stadium.

Hodges, 33, is at risk of missing Sunday week’s grand final after being put on report for a 57th-minute lifting tackle on Roosters back-rower Aidan Guerra.

But Hodges told the Nine Network at fulltime: “Nah, not worried mate.

“It’s what I said to the ref – he’s (Guerra) sorta jumped and he won the penalty.

“I’ll be fine mate – it’s one of those things. He jumped in the tackle; I could do nothing about it.”

It seemed nothing could go wrong for Brisbane in the grand final decider against the minor premiers, with fullback Darius Boyd scoring an opening-minute intercept try thanks to a Shaun Kenny-Dowall brain snap.

Brisbane duly booked their first grand final berth since 2006 but it didn’t all go to script with Hodges creating potential heartache for coach Wayne Bennett’s Broncos.

Hodges will be sweating on the match review committee (MRC) findings as he looks to keep alive a fairytale farewell to his 16th season.

A grade-one dangerous throw charge carries a 125-point base penalty.

Hodges will need to fight it if pinged by the MRC on Monday, as he has committed a previous offence which carries a 20 per cent loading.

But on Friday night, Hodges was the prince of Suncorp Stadium with most of the 51,826-strong crowd wishing him a fond farewell to his home ground.

But it remains to be seen if he gets the happy ending and helps Brisbane claim their seventh premiership under Bennett.

It’s fair to say not much went right for the Roosters in the seven-tries-to-two romp.

After Kenny-Dowall’s opening-minute howler, the winger looked for redemption in the first set of the second half when he crossed the line in the 42nd minute – only to be denied by the video referee for a forward pass.

And Roosters halfback Mitchell Pearce didn’t emerge for the second half, staying on the sideline icing his knee.

Kenny-Dowall’s gaffe helped Brisbane jump to a 16-0 lead after 19 minutes but a Blake Ferguson double reduced the deficit to 20-12 by halftime.

It marks only the sixth time since 1999 that a minor premier has failed to make the grand final.

Brisbane have won just two of their past six grand final qualifiers.

They have a perfect 6-0 grand final record.

The Broncos will play the victor of Saturday night’s Melbourne-North Queensland second preliminary final in the premiership decider in Sydney.