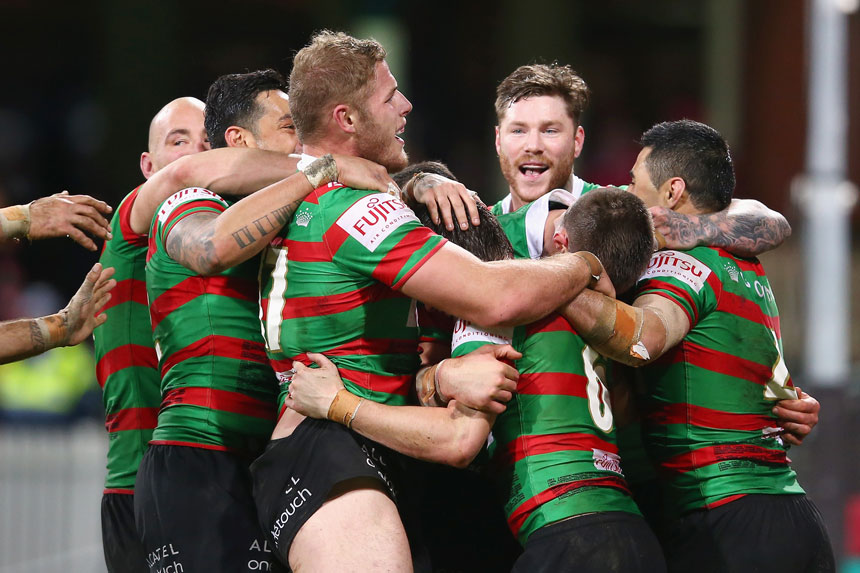 South Sydney have slipped into the top four – albeit provisionally – for the first time in three months with a 24-8 victory over St George-Illawarra at a wet SCG.

In the NRL’s first game of the year at the historic venue on Saturday night, a hearty crowd of 18,217 watched Rabbitohs halfback Adam Reynolds produce two clutch plays in the final 10 minutes to seal a decisive win.

The Rabbitohs led 12-4 when Josh Dugan crossed in the 69th minute to set up a tense finish.

But Reynolds hit back with an outstanding reflex catch off his own grubber in the 73rd, before the playmaker sealed the win with a kick for Luke Keary in the 77th.

However, the victory could come at a cost, with hooker Cameron McInnes coming off with an ankle injury early in the second half, while winger Aaron Gray was hampered by a hamstring prolem.

Rabbitohs centre Dylan Walker opened the scoring when he powered through some flimsy defence to grab an early lead in the 8th minute.

The advantage should’ve doubled when John Sutton broke into the backfield not long after but Greg Inglis spilt the ball with no pressure on him.

A string of penalties meant the Red V were forced to defend their line for long stretches but they conceded just two points before Benji Marshall produced a trademark no-look cut-out for Justin Hunt just before the break.

The loss means the Dragons fall out of the top eight for the first time since Round 4.

Earlier on Saturday, Newcastle ended a six-match losing streak with a 30-2 trouncing of the Gold Coast Titans.

The Titans were poor, making several errors and completing just 54 per cent of their sets, and were out of the game at half-time.

Knights captain Kurt Gidley scored for the game’s first try in the 24th mine and Jake Mamo and Tariq Sims both crossed before the break, giving Newcastle a 20-2 lead.

Jarrod Mullen and Danny Levi added to the scoreline with tries of their own, but there was concern for Newcastle with Dane Gagai sent to hospital with an irregular heartbeat.

And the Cronulla Sharks edged the Canberra Raiders 21-20 in a golden-point thriller, with Valentine Holmes kicking the match-winning field goal.