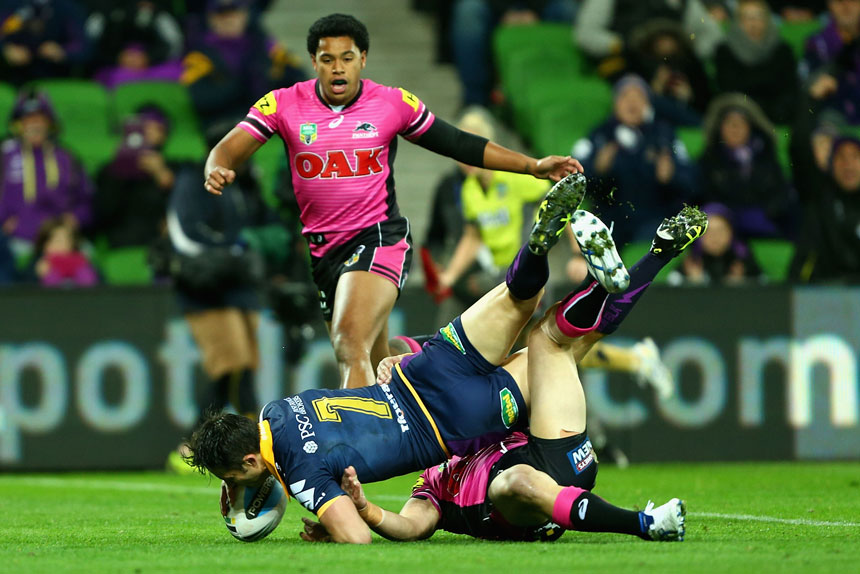 Melbourne did their best to make sure captain Cameron Smith’s 300th NRL game was one to remember with a record win over Penrith.

The skipper became the first Storm player to reach the milestone and was able to celebrate in style after a 52-10 victory at AAMI Park.

It was the biggest win of the NRL season, eclipsing the previous best margin by two.

• Old warhorse gets the Broncos bucking again
• Cam Smith to clear the air with Alex McKinnon
• McKinnon, Smith to meet up: Johns

After four successive losses heading into the match, the 10-try romp looked a return to Melbourne’s glory days, when they were almost unstoppable on their home turf.

Smith starred but his teammates did their best to steal some of the limelight.

Halfback Cooper Cronk was a stand-out as he, winger Marika Koroibete and second-rower Kevin Proctor each scored two tries apiece.

Koroibete showed off his amazing athleticism to dive onto a Smith kick for his first and he then raced 90 metres to touch down for his second, after diffusing a Panthers bomb.

Melbourne had the match won by half-time, leading 26-0 after a brilliant start.

Cronk opened the scoring in the fifth minute thanks to a perfect chip kick into the in-goal by Smith that popped up into his arms.

Tohu Harris, Proctor and Koroibete all scored before Cronk took advantage of Penrith losing centre Isaah Yeo to the sin-bin for a professional foul.

Yeo was given a stint on the sidelines for holding Cronk back as he attempted to get to a ball in the in-goal but the Storm No.7 made the most of a second chance just a minute later.

After almost 60 minutes, the Panthers finally got their first points through winger Waqa Blake and they were able to double it soon after with fullback Will Smith touching down.

To Penrith’s credit the second half was fairly level everywhere but the scoreboard, but the heavy defensive work took its toll, with late Storm tries by Mahe Fonua, Proctor and one by Richie Kennar capping the night.

In Friday’s other match, Josh Jackson inspired Canterbury to a 28-4 win over Parramatta at ANZ Stadium.

Frank Pritchard scored a double for the Bulldogs, with Jackson crossing for one himself, a reward for constantly menacing the Eels defence with his strong running.

Pritchard scored the opener in the 21st minute when Trent Hodkinson dummied his way through the Eels defensive line, and in the 46th minute when he latched onto a Josh Reynolds cross kick.

Jackson’s carving 30m run in the 52nd minute put the Dogs further ahead, before a scintillating 80m effort from Brett Morris two minutes later put the result beyond doubt in front of 17,082 fans.