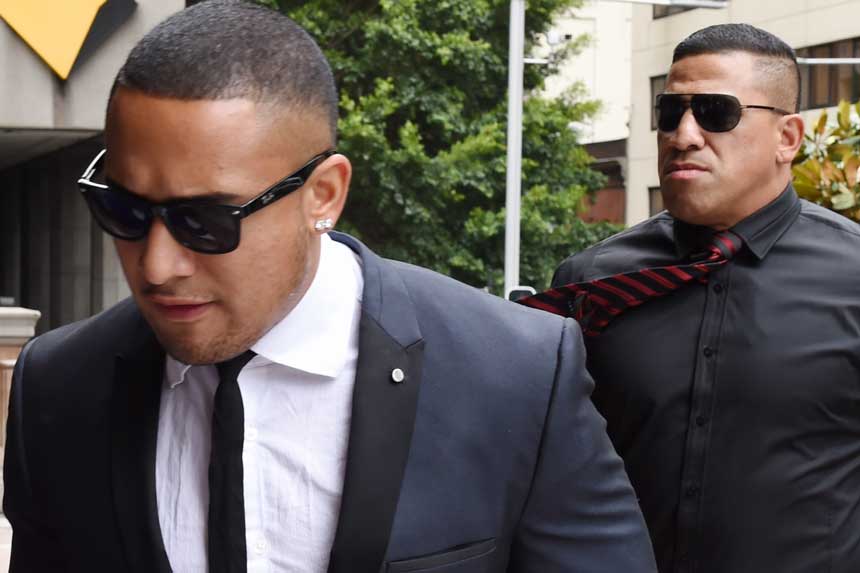 Promising rugby league player Jamil Hopoate has been jailed for at least one year over the drunken, brutal and unprovoked attack of a man outside a Sydney pub.

After the sentence was handed down the 20-year-old hugged and kissed his father John Hopoate, a former NRL player, before he was taken into custody.

Hopoate pleaded guilty to two counts of assault occasioning actual bodily harm in company to the unprovoked attack on Alexander Christie and “good Samaritan” Timothy Blackett outside a Manly hotel on Sydney’s northern beaches in February.

In sentencing him on Wednesday, Magistrate Jane Mottley said a term of imprisonment was the only appropriate penalty.

“To say the community as a whole is deeply concerned about this type of gratuitous violence is an understatement,” she said.

The court heard Hopoate was captured on CCTV outside the Ivanhoe Hotel arguing with a security guard after he was ejected from the premises.

His co-offenders John and Luke Akauola then arrived and set upon Mr Christie, who was talking on his mobile phone, punching and kicking him.

Mr Blackett tried to intervene but was “cast aside like a toy” so the brutal assault could continue, Ms Mottley said.

Just as Mr Christie tried to rouse himself from the ground, Hopoate ran over and kicked him before Luke Akauola delivered the final blow that rendered their victim unconscious.

The trio then left the scene.

The court heard Hopoate had “self-medicated” with alcohol in an attempt to deal with his anxiety problems and had been placed under pressure to follow the sporting successes of his father John and brother Will.

Ms Mottley said his parents might have been “too supportive” of his sporting career by taking over his affairs and leaving him with few life or emotional skills.

She sentenced him to a minimum of one year in prison, and a maximum of 18 months for the attack on Mr Christie.

He was also placed a two-year good behaviour bond over the assault on Mr Blackett.

The Akauolas will be sentenced next year.

“The club will be reviewing the matter internally before any further comment will be made,” the Sea Eagles said in a statement.