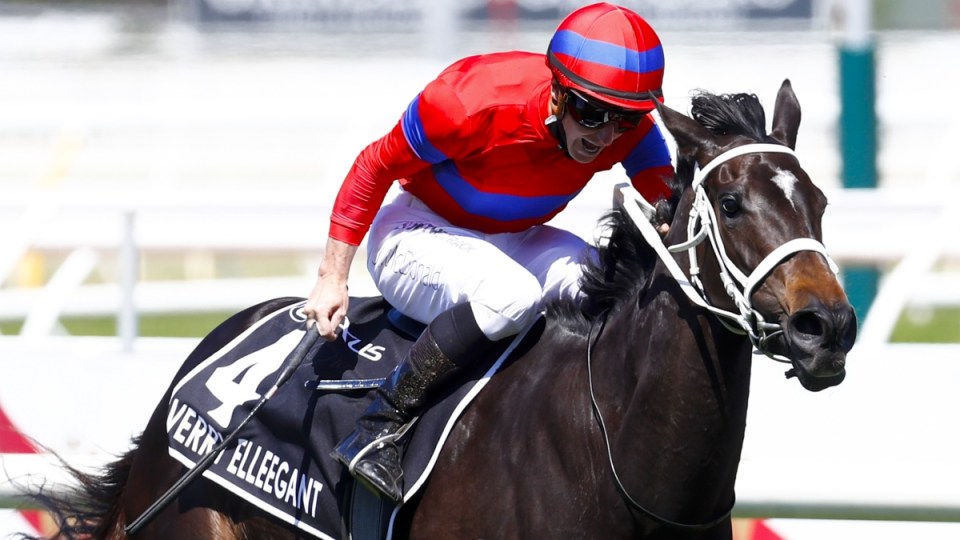 Melbourne Cup winner Verry Elleegant will now have a few more weeks to get used to racing in France. Photo: AAP

The storied stayer will miss her intended engagement in the Prix Rothschild at Deauville on Tuesday, with new trainer Francis-Henri Graffard deciding to give her more time to acclimatise.

The Prix de l’Arc de Triomphe is intended to be the ultimate target for the mare, who won 11 Group One races during her Australian career.

However, the star import, who arrived at Graffard’s Chantilly stable last month, will be given a little more time before making her highly anticipated European debut.

Verry Elleegant has won races between seven furlongs and the two miles of the Melbourne Cup, and it was hoped she would take on specialist milers in a race restricted to fillies and mares over Deauville’s straight track.

However, Graffard has had a rethink, with the Prix Jean Romanet, over a mile and a quarter now circled on the calendar in three weeks’ time.

Graffard posted on Twitter: “Following her last bit of serious work yesterday, we have decided not to declare Verry Elleegant for the Group One Prix Rothschild at Deauville on Tuesday, 2 August.

“She is telling us that she needs a bit more time and, having discussed with her owners, we have decided that the best thing is to listen to her and instead aim towards the Group One Darley Prix Jean Romanet at Deauville on 21 August.”

What if we had to sanction China?
Moscow blames deaths of 40 POWs on Ukraine missile blitz
Today's Stories