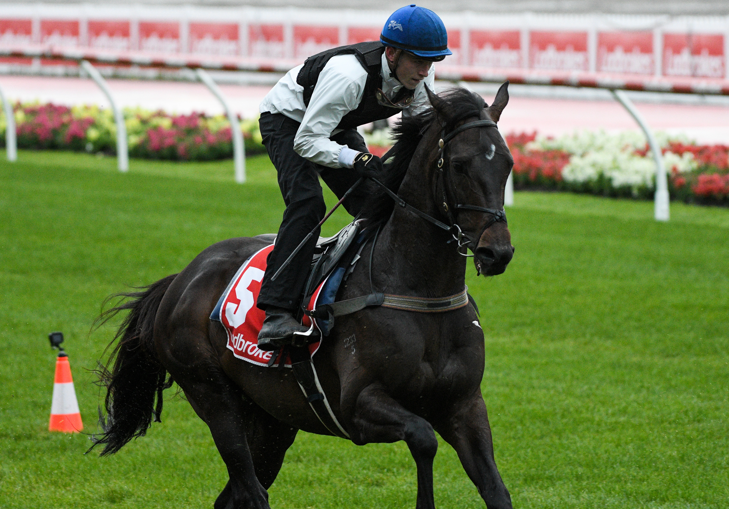 Mere minutes after this photo of Sir Dragonet was taken, the magnificent beast broke down and was euthanised. Photo: Getty

One of the stars of the Australian turf since arriving from Ireland for last year’s spring carnival, Sir Dragonet broke down during an early morning gallop at Moonee Valley.

The valuable entire was having his final piece of serious work heading into a defence of his Cox Plate crown at the racetrack next week.

“It is with great sadness to report that Cox Plate champion Sir Dragonet has been euthanised after tragically breaking down in a track gallop this morning,” the Moonee Valley Racing Club confirmed in a statement.

Co-trainer Ciaron Maher was at Moonee Valley as Sir Dragonet was one of 18 horses scheduled to go through their paces ahead of the Cox Plate carnival.

The horse reportedly faltered 800m into his gallop.

Sir Dragonet started his racing career in Ireland out of the all-conquering stable of Aiden O’Brien before his sale to an Australian ownership group last year.

The syndicate struck immediate paydirt when Sir Dragonet won the $5 million Cox Plate at his first Australian start for Maher and his training partner David Eustace.

Sir Dragonet ran sixth in the Melbourne Cup at his next outing and returned in the autumn to win a Group One race in Sydney.

He was on target to run well again in the Cox Plate after two lead-in races when finishing close-up each time behind boom horse Incentivise.