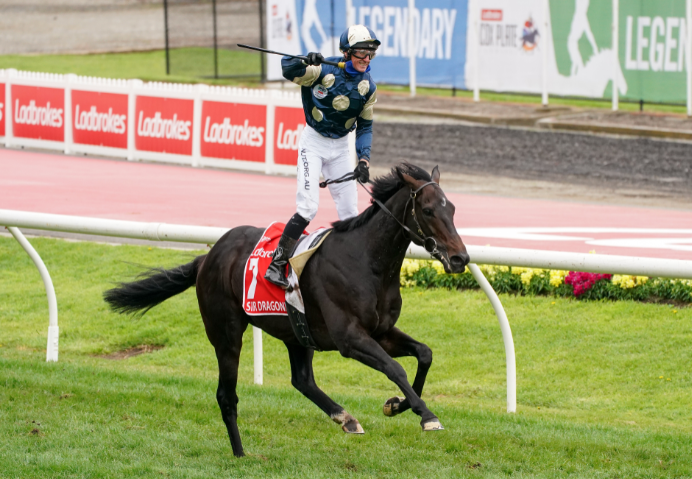 Glen Boss stands high in the stirrups after his big win - a celebration that cost him a $1000 fine. Photo: AAP/Scott Barbour

Glen Boss has won his fourth Cox Plate as a jockey after guiding Sir Dragonet to victory in the 100th running of Australasia’s weight-for-age championship at Moonee Valley.

In a race decided on testing ground because of rain, Boss guided Sir Dragonet — purchased from Europe with the specific aim of winning the Cox Plate — to the front 100 metres from the winning post to beat home Armory by one-and-a-quarter lengths in the $5 million race.

Favourite Russian Camelot finished third, three-quarters of a length behind Armory after hitting the front at the top of the straight.

Boss celebrated the win in style, standing high in the irons and giving a fist pump as Sir Dragonet hit the line.

He was later fined $1,000 by Racing Victoria stewards for his celebration and also $1,000 for breaching COVID-19 protocols by hugging stable staff.

Sir Dragonet’s win came in front of an almost empty Moonee Valley after the state Government backflipped on a decision to allow crowds to attend the race meeting.

Approval had been granted for up to 500 owners and connections to attend Friday night’s Manikato Stakes and the Cox Plate, but that decision was overturned after community backlash.

He gets his big race, but it’s not for Aidan O’Brien! Sir Dragonet wins the Ladbrokes Cox Plate for Ciaron Maher and David Eustace!

Sir Dragonet raced out of Aidan O’Brien’s all-conquering Irish stable until a mid-year sale to the Australian operation of Ciaron Maher and David Eustace.

For Boss, the win came at the expense of Hugh Bowman, who had the ride before earning a suspension out of Caulfield Guineas day.

A three-time Melbourne Cup-winning jockey thanks to the legendary exploits of Makybe Diva, Boss could hardly believe his good fortune as he added to his Cox Plate collection.

“I got the call up, and, you know, Hughie was part of that.

“They put up a few names and Hughie backed me. He said ‘put Bossy on’, and thank God I got the job.”

Sir Dragonet was rated a horse of such promise in the Northern Hemisphere that he was favourite to win last year’s English Derby.

But after a sequence of defeats he found his way to Maher and Eustace, an emerging force in Australia’s training ranks.

“To think you get a horse of this calibre,” Maher said,

“I’ve looked after him for a bit over two weeks — it is just phenomenal.

“He never missed an oat and I was always very confident with his fitness.”