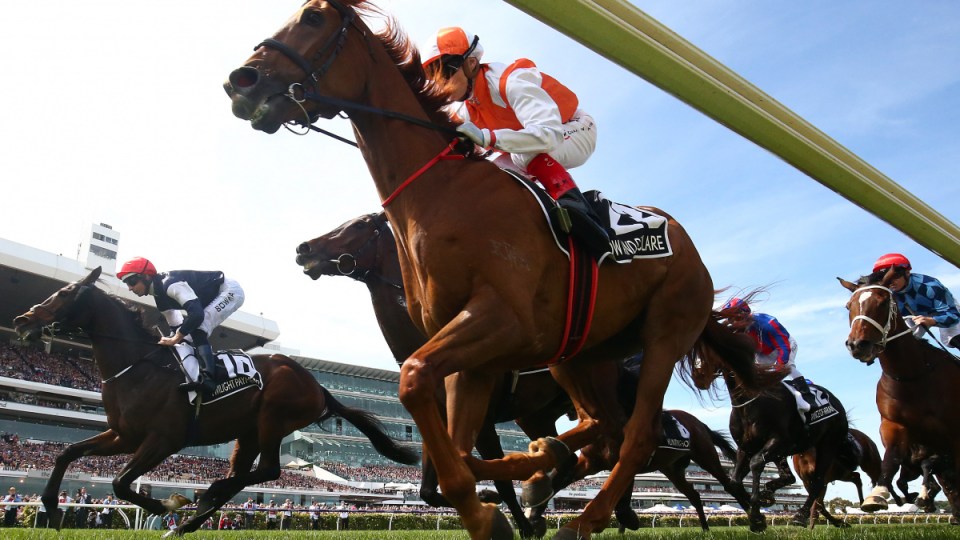 The four-year-old gelding prevailed in an incredible finish. Photo: Getty

Australian horse Vow and Declare won the 2019 Melbourne Cup on Tuesday by the slimmest of margins.

The Hunter Valley-born underdog, ridden by Victorian jockey Craig Williams, saw off Ireland’s Master of Reality and British Horse Prince of Arran in an incredible final sprint to the finish.

But the final placings were the subject of drama after the race as a stewards’ protest pushed Master Of Reality out of the placings.

The final placings gave Prince of Arran second place and US horse Il Paradiso third. Master of Reality was relegated to fourth.

More than 90,000 racegoers were at the Flemington racecourse to cheer on Vow and Declare, who started as the fourth favourite in the race.

The four-year-old gelding is sired by Declaration Of War (USA) out of the Testa Rossa mare, Geblitzt.

Master of Reality was out in front in the final stretch and blocked off Ill Paradiso, who was making ground on the inside.

Jockey Wayne Lordan decided not to protest, but Racing Victoria stewards lodged their on protest at the completion of the race.

After reviewing the incident, stewards upheld the protest against Master of Reality jockey Frankie Dettori, deciding the Italian had shifted his mount and impeded the run of Il Paradiso.

While their inside the course, there was also plenty of drama outside Flemington after the race when an Uber app glitch saw hundreds of frustrated racegoers temporarily stranded.

While drivers were ready and waiting at the course, the glitch apparently meant passengers were unable to be matched to their rides.

The Coalition for the Protection of Racehorses (CPR), which organised the protest, said a ‘human horse race’ was run at the same time as official Melbourne Cup.

Alternative #MelbourneCup held across the road by the Coalition for the Protection of Race Horses protesting the event @rhiannonelston pic.twitter.com/QHxY7IGQ5S

CPR spokeswoman Kristin Leigh said the group had been inundated with support since ABC’s 7.30 program broadcast footage last month of racehorses being sent to a slaughterhouse.

“People are certainly waking up to the truth behind this industry. People can’t say they don’t know anymore,” she told AAP on Monday.

“If you’re going to the races this year and you saw 7.30, you are complicit in that animal abuse.”

Earlier, the grassy lawn in the general admission area, usually crowded with picnic blankets, had some spaces because of the wet conditions.

Most punters didn’t care. They threw plastic ponchos onto the grass and piled picnics on top, 10 metres from the Flemington finish line.

Things were slow to get going in the exclusive Birdcage, where companies pay millions to attract celebrities and compete for bragging rights during the four-day Spring Racing Carnival.

A 10-metre-high pair of golden wings towered at one end as a pianist played his first request of the day, New York State of Mind, on a blue baby grand at the Bird Bath Bar.