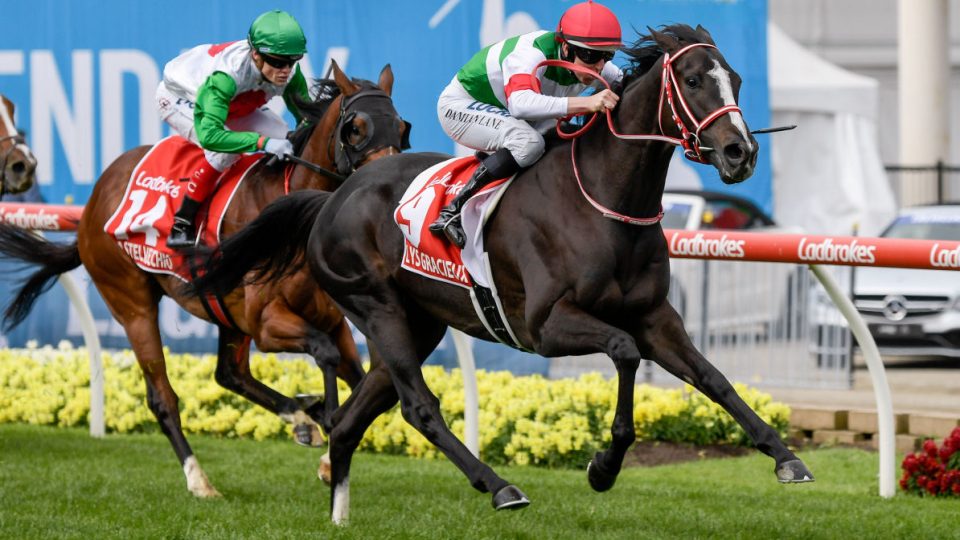 Japanese mare Lys Gracieux has won the the Cox Plate at Moonee Valley giving jockey Damian Lane another triumph a week after his Caulfield Cup win.

Lys Gracieux was trapped back early, but burst out wide to race to a clear win over Castelvecchio and Te Akau Shark.

Lane, who will serve a suspension after Saturday until Melbourne Cup Day, said it was a dream come true to win a Cox Plate.

“Unbelievable. I grew up watching my idols win this race and to be on the honour role is a privilege,” he said immediately after the race on Channel Seven.

“The pace was stronger than I thought it would be to the first corner and I rode her back. She got keen when the pace came out of the race, but I was confident once I got her around the side. She didn’t get around the track too well but she was too good anyway.”

Lane has reaped the rewards of taking his career to Japan, returning to Melbourne to take out the Caulfield Cup on another Japanese, horse Mer De Glace – also his Melbourne Cup ride.

For them to come out here and put the confidence in me to then put me on them when they came out here, I’m forever grateful.

“I want to pay special thanks to Mr Yahagi who brought the horses out here. They are beasts and it is great to be associated with them, and I’ll be back Melbourne Cup Day, so let’s hope we can do more damage there.

Japanese trainer Yoshito Yahagi said he considered Melbourne his “home town” and said it was important to have Lane on board.

“Damien Lane was there in Japan and rode this mare,” he said through an interpreter. “The road started from there and we came through here. So it was super-important.

“I think I mentioned a few times that I was here when Kingston Town won back in 1982. I finally came back home to win a Cox Plate. Yeah, it means a lot to me.”

Lys Gracieux won a $2 million International bonus on top of the $3 million for the race win, taking her prize money to almost $14 million.