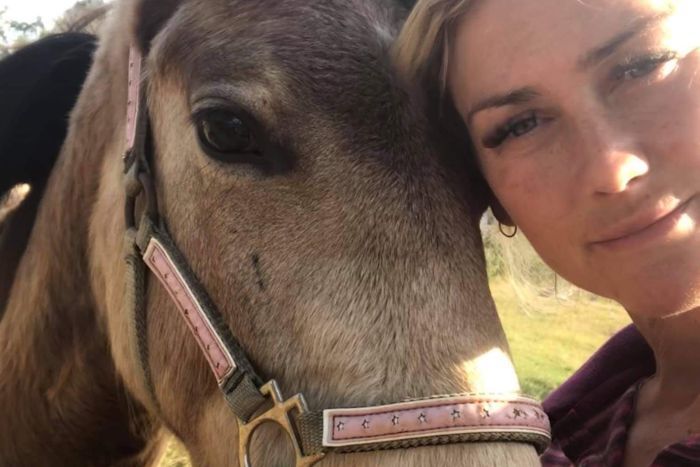 A Queensland jockey has described the horror of watching the ABC’s 7.30 and seeing a horse she rode for years killed at an abattoir.

The program was given hidden-camera video taken at the Meramist Abattoir in Caboolture, which showed former racehorses being kicked, dragged, shocked and slaughtered.

Gold Coast jockey Laura Cheshire said she rode the horse War Ends for 18 months, before seeing it killed on the program, which aired on Thursday night.

“I was just disgusted. I was in a mess of tears on the couch,” she said.

“Watching it was hard enough, but then seeing a horse come into the frame that I had so much to do with was just not anything I thought I’d ever have to deal with,”

It was so disgusting to watch a horse that had done so much, end up in that situation and there was no need for it, the horse didn’t have a dead end, the horse had places he could go.

“These aren’t feral horses being sent through, these are racehorses that have been trained to do everything you could ask them to do.”

“He dropped most of the riders that have sat on his back at the racetrack,” she said. “A lot of the boys didn’t really get along with him, I think he was actually more of a girls’ horse.”

Cheshire was in tears describing her time with War Ends, adamant that the 10-year-old didn’t deserve that end to its life.

Posting to social media she recalled numerous attempts to re-home the horse which she says has ended in tragedy.

“The racing industry is failing racehorses. I have failed a racehorse. My heart is so broken. War Ends I tried to do the best thing for you after you were passed on and on and on,” she said.

Cheshire said War Ends started at a show home, then went to a horse dealer before ending up with an owner who sells horses for beginner riders before being purchased as a horse for a child.

She said he was later passed on to two other owners and she had contacted his last known owner to offer to re-home him if there were any problems.

Cheshire said he was not an appropriate horse for beginner riders, and said it is a common issue, that racehorses are sold to inexperienced riders.

“The problem is there are too many horses and not enough homes,” she said.

“A lot of thoroughbreds they are bred to be athletes, they are highly strung horses, they need riders that can work them out and work with them.”

“There are so many horses that need homes after racing that the homes that are available to those horses are simply not good enough riders,” she said.

“They take these horses on … and all of a sudden ‘this horse is too much for me, but I got it for free’ or ‘I got it for $500’ so it is an expendable product, so ‘I’ll just send this one to the doggers and I’ll look for the next free one’,” she said.

The jockey said she wants to see Racing Queensland create a retirement fund for horses, similar to what New South Wales has.

“I know that Racing NSW has horses that fall through the cracks, but there is a system in place, there are programs in place for these horses, and they are taken on and given a second chance,” she said.

“I think that the integrity office and Racing Queensland need to work together to sort something out so these horses have something after racing.

“I think it falls on their shoulders. They’re the industry that the racehorses are in and it’s done state by state.

“New South Wales are doing it, I think Queensland should be doing it too.”

Cheshire said the onus of care should not be entirely on the trainers who lack the training and resources to find new homes for thoroughbreds.

“I think that owners and trainers come into racing [but] a lot of owners aren’t horse people. They buy racehorses, they go to the races, they get enjoyment out of them. And then trainers are left to sort of move the horse on afterwards.

“And a lot of trainers are horse trainers, they’re not people that rehome horses.”

Cheshire said she would also like to see a welfare fee attached to every race in Queensland to look after horses.