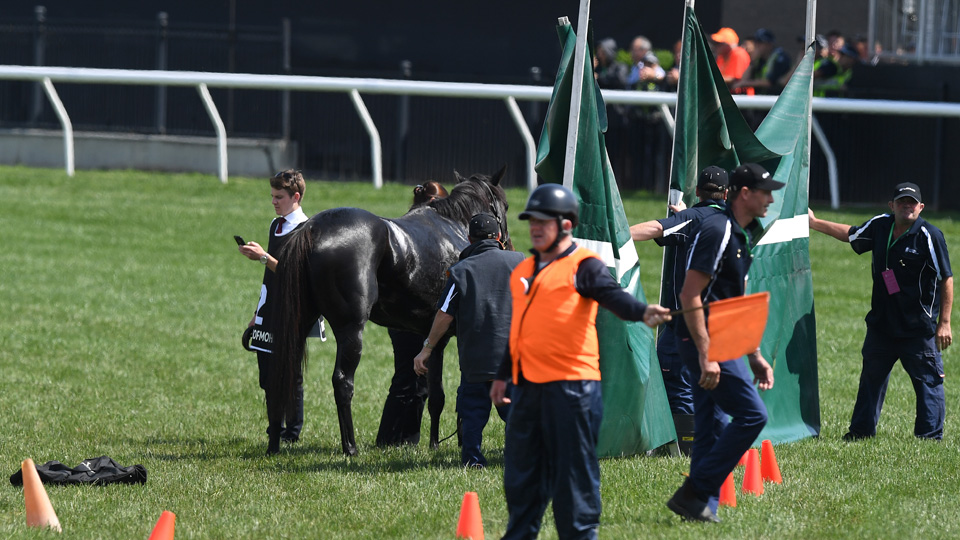 A terrible end. The Cliffsofmoher moments after breaking down in the 2018 Melbourne Cup. Photo: AAP
analysis

Animal welfare is front and centre again after the running of Australia’s most famous horse race.

But don’t hold your breath waiting for change. Horse racing is one of Australia’s biggest industries. It’s mighty and powerful and it’s not about to be told what to do.

There has been much outrage after The Cliffsofmoher suffered a fractured shoulder in Tuesday’s Melbourne Cup, which led to the horse being euthanised shortly after.

World Animal Protection senior campaign manager Ben Pearson said in a statement: “The Melbourne Cup is the (disg)race that stops a nation. It’s heartbreaking to see another horse needlessly lose its life during the Melbourne Cup.”

This year’s Melbourne Cup has been overshadowed by the death of a star galloper. Vets were forced to put down Cliffsofmoher after the five-year-old Irish stallion suffered a fractured shoulder. #MelbourneCup #7News pic.twitter.com/bvJ3aa4gNj

It’s the fourth time in the past six years that a Melbourne Cup runner has died in the immediate aftermath of the race.

And, it’s an issue that is not confined to Australia’s most famous race. According to statistics recorded by the Coalition for the Protection of Racehorses, 119 horse racing deaths were recorded between August 1, 2017 to July 31, 2018.

It has led to animal activists to demand change, declaring the sport of kings to be cruel, unsafe and in need of drastic reform.

But it’s hard to see this happening any time soon.

The evidence of this lies in just how powerful the industry is, characterised by the strength of the industry’s allies – from rich, powerful corporates, billionaire owners, famous trainers, celebrity socialites and the media, to the average punter trying to find a winner.

The numbers tell the story. In Victoria alone, the racing industry sustains more than 33,000 jobs, contributing $4.3 billion annually to the state economy.

What other sport has its own designated minister in the state government?

The most recent edition of the Australian Gambling Statistics highlights just how much Australians love to gamble on horse races. Total race betting expenditure in Australia grew to $3.313 billion in 2016-17, marking a 6.9 per cent increase on the previous year.

This, along with the sponsorships of corporates such as Lexus, Stella Artois and Ladbrokes, means the prize money on offer in Australia is up there with the highest in the world.

This year’s Melbourne Cup was worth $7.3 million in prize money. The Cox Plate and Caulfield Cup were worth $5 million. Sydney’s The Everest, billed as ‘the richest horse race on turf’ had a total prize pool of $13 million.

Throughout the year, Racing Victoria distributes about $230 million in prize money. Racing NSW offers up about $260 million.

This attracts wealthy and influential business types from around the world, who own racehorses for fun and to try to make a buck along the way.

Others engage with the industry by simply showing up in their thousands to attend race meetings that are engrained in our popular culture. Last year’s Flemington Carnival attracted more than 310,000 racing fans across four days.

Just over a week ago, Moonee Valley was bursting at the seams with locals clamouring for a glimpse of Australia’s most famous horse, Winx, who, after winning her fourth consecutive Cox Plate, was celebrated like a rock star.

Mainstream media dedicated more screen time, air space and newspaper pages to the famous horse in the immediate aftermath of her victory than any human in Australia. Horse racing wasn’t cruel or dangerous then.

The racing industry will argue the instances of deaths is minimal across the board. Jamie Stier, Racing Victoria’s manager of integrity services, described it as “an unfortunate incident that happens infrequently, with Victoria having one of the best safety records in world racing”.

I grew up with horses and this never happened in our paddock #cliffsofmoher pic.twitter.com/zyPwNcnrxW

They’d argue that across the country on Tuesday, hundreds of horses raced safely.

Plus, at the end of the day, society will vote with its feet. If it stops gambling on horse racing, stops attending race meetings and demands more from the racing industry, we might see change.

But the reality is that won’t happen. After all, the racing industry’s allies combine to include all sections of society. And for the most part, it seems they don’t have a problem with the current state of play.

On Tuesday about 30 protesters gathered outside the entrance of the Flemington racecourse chanting “there’s no excuse for animal abuse”.

Inside 83,000 racing enthusiasts gathered to watch and celebrate the Melbourne Cup. The majority will be back – some as soon as Thursday’s Oaks Day or Saturday’s Stakes Day.

The racing industry is just too big to fail.