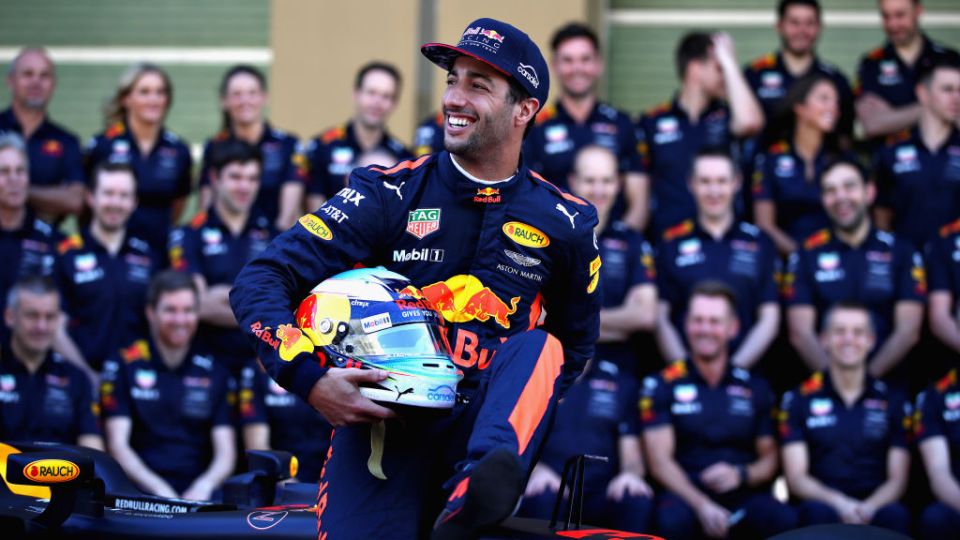 Daniel Ricciardo was forced to retire from the Abu Dhabi Formula One Grand Prix with a flat tyre. Photo: Getty

Ricciardo was forced to retire after 35 laps following a tyre puncture as Finnish driver Bottas comfortably secured the third win of his F1 career, all this season since joining from Williams.

It came after he claimed his 22nd career podium and 13th with Mercedes.

With his fourth world title already secure, Hamilton had no need to chase the win. He finished four seconds behind and did not get close enough to attack.

“It is a really important win for me after having a pretty difficult start to the second half of the year,” Bottas said. “This weekend, pole and win, couldn’t be happier to end the season like this.

“Again, congratulations to Lewis for the title and congrats to Sebastian for second in the championship. I’m third this year and hopefully better next year.”

Bottas started from pole for the fourth time this season and assuredly held the position into the first corner.

Sebastian Vettel finished 20 seconds behind him in third place.

Vettel’s Ferrari teammate Kimi Raikkonen was fourth and also moved up to fourth in the standings, behind Bottas and Vettel.

Hamilton clinched the world title – his third with Mercedes – in Mexico two races ago when he ended Vettel’s fading hopes.

Red Bull driver Max Verstappen finished fifth while Ricciardo’s retirement saw him fall a place to fifth in the standings.

Bottas made a clean start while Hamilton held off Vettel, who locked his left front tyre angling into the first corner.

After 21 of 55 laps Bottas was 2.5 seconds clear of Hamilton and eight ahead of Vettel, who was the first of the trio to pit for new tyres. Bottas did one lap later, leaving Hamilton briefly in front.

At much the same time, Ricciardo retired, leaving his stranded Red Bull on a patch of grass as he hitched a lift back to the team garage on the back of a scooter.

It was the third time in four races – and sixth in 20 this year – that Ricciardo has failed to finish.

The 2018 season – with a new logo unveiled on Sunday – starts on March 25 in Melbourne.

Hamilton questioned the need for the logo change moments after it was revealed.

“The old one was iconic, and the new one isn’t,” he said. “Imagine if Ferrari changed theirs.”

Bottas and Vettel also queried the wisdom of the rebrand with both insisting they preferred the old design.